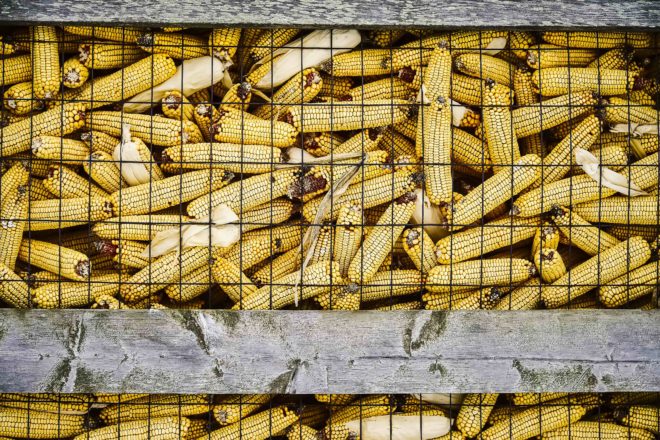 In Wisconsin, it’s hard to imagine a world in which there is too much cheese. But too much of everything farms produce has placed those producers in one of the toughest times since the Farm Crisis of the 1980s. The depression has widespread impacts, particularly for ongoing conservation efforts.

Niles and other farmers deal mostly in dairy products, which are experiencing sustained price depression after enjoying historic highs just four years ago.

But cash crop farmers, particularly those who grow corn, soybeans and wheat, are not out of the weeds on prices either. After similar highs just a few years ago, those commodities have kept flat for a few years at levels that don’t give farmers any room for error or expenses.

Cash crop farmers do have the benefit of different crops with different prices. If corn price is low, a farmer can plant soybeans next year. But low prices industry-wide have made that option irrelevant.

“There’s only so many crops you can grow and they’re all sort of low right now,” said Eric Olson, a farmer in Southern Door, who has begun exploring produce outside of the traditional field crops. “You kind of just grow them and do your best job to get a good yield so you can at least multiply the price out a little higher.”

“If [Eric] was growing something that, last year, was profitable but doesn’t look like it’s going to be this year, he grows something different,” Niles said. “But when you’ve got your barn full of cows, you can’t.”

“You can’t just shut the lights off, sell everything and start back up when the prices come back up,” said Tony Brey, co-owner of Brey Cycle Farm. “It’s not quite that easy.”

Why Are Prices Low? 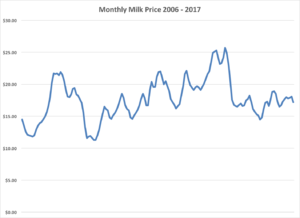 There are few industries that are as dependent on global supply and demand as much as agriculture.

For agriculture, the Chicago Mercantile Exchange sets the price for commodities. It’s basically the New York Stock Exchange for farmers. Economists in Chicago are at work every day tracking trends, watching global weather patterns and determining how much of a crop will be harvested.

“Worldwide, there is too much,” Niles said of agricultural commodities.

“Given the milk price and the cost of producing, dairy farmers are financially in a difficult time right now,” said Paul Zimmerman, Executive Director of Governmental Relations for the Wisconsin Farm Bureau.

Oversupply, the culprit in the low prices, is happening for a myriad of reasons.

Developing countries are entering the global market. Countries in South America, particularly Brazil and Argentina, are increasing their production capacity in cash crops and adding to global supply despite incessant rains that damage their crops. European countries are producing more dairy than before and there’s simply too much to go around.

In 2016, 58,000 farmers in 27 European Union countries agreed to reduce dairy production to help prices rise. It worked in Europe, but as the rest of the world’s dairy producers continue expanding production, it is not likely to change the global glut of dairy.

Also in 2016, the U.S. government bought $20 million worth of excess cheese that no one else wanted to buy to help hold up depressed dairy prices. It also may have helped a bit, but it didn’t stop farmers from continuing to produce. For eight straight years, the United States has set a new record for milk production.

The dairy industry is particularly vulnerable to large boom and bust cycles because it takes a few years to start or stop a dairy operation and for that change to reach the market.

Stockpiles of crops are also at an all-time high. The amount of surplus wheat, corn and soybeans sitting in grain bins across the world waiting to go to market has hit a record for each of the past three years, according to the United States Department of Agriculture.

Meanwhile, technology is making milk and crop production almost flawless, meaning a decrease in those stockpiles is unlikely.

“We’re getting too efficient,” said Jacksonport farmer Randy Halstead, who sold his cows five years ago and now farms for cash crops.

When prices are consistently low, farmers do one of two things: go out of business or continue maximizing production in order to reap every cent of the small production profits.

With the third straight year of sluggish prices and a bleak outlook in 2018, Zimmerman expects to see some farms for sale this year.

Who can survive the downturn? 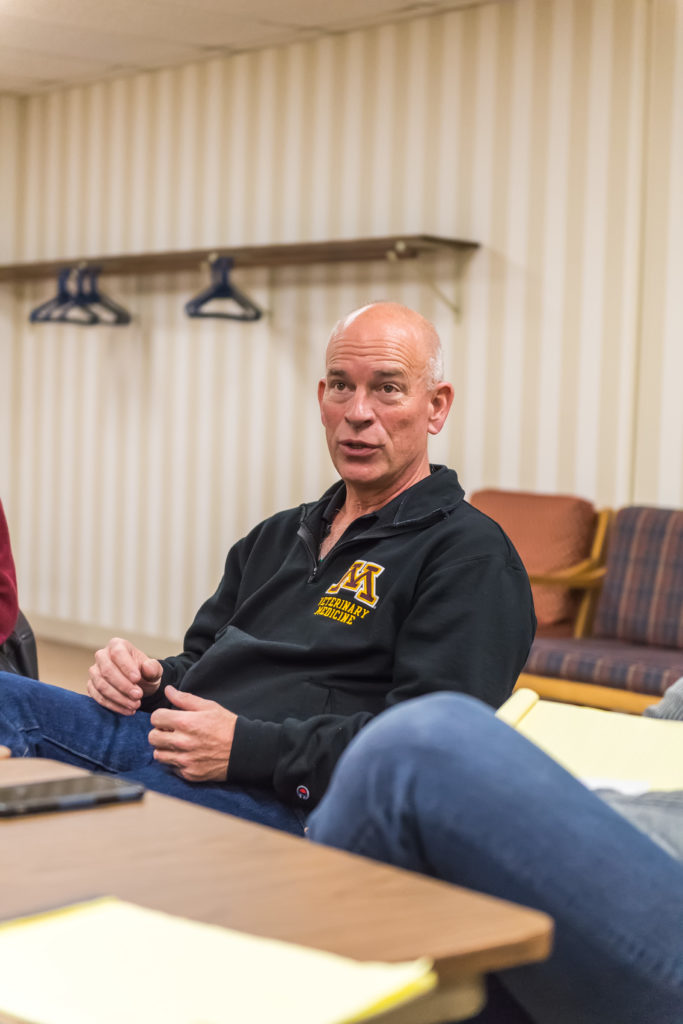 Low prices don’t discriminate between the sizes of farms. The biggest CAFOs and the smallest family farm all take the same price when they haul milk or grain to the processing plant.

When prices are stuck at a low level, the size of the farm matters less than the amount of debt a farmer has in his or her name.

The debt to asset ratio – the ratio of debt a farmer has to the value of assets such as livestock, land and equipment – paints the clearest picture for who is in trouble.

“You can have a small farm that’s paid off and almost exclusively family labor and their costs are vastly different than a medium-sized farm that has higher debt or a large farm that has an even larger debt,” Zimmerman said.

When a farm has a lot of debt, a bank is less likely to loan out even more money, particularly in a time of low farm income.

“With low prices you got to make your payments,” said Halstead. “If you don’t have any debt, you can survive.”

This issue falls disproportionately on young farmers, who are generally saddled with more debt than their older counterparts who have been making payments for decades.

The debt to asset ratio is also stressed by low commodity prices because it can decrease the value of assets a farmer has, thus increasing the ratio of debt. When milk prices are low, the market value of a dairy cow is low too.

“Give them a dime and they’ll spend a dollar,” Kinnard said, laughing but hardly being sarcastic.

If farmers took 2014’s high prices as a safety net to take on more debt, spending dollars when they had dimes, their debt-to-asset ratio likely rose, making it harder to stay above water today.

Low prices from oversupply has its benefits for consumers. Ethanol-backed gasoline is a few cents cheaper and the prices of some groceries might be lower. But when farmers don’t have the money to stay afloat, the implications for the economy and the environment are far-reaching.

“How many brand new tractors do you think we’ll sell in northeast Wisconsin this year?” Brey asked. “A lot less than 4 years ago.”

An $88 billion economy, agriculture in Wisconsin supports nearly 12 percent of all jobs in the state directly. The indirect effect on jobs, such as farm equipment suppliers, agricultural scientists and the local food industry adds to that number.

“It seems like when farmers have money they keep it circulating,” Halstead said.

The environmental impacts of low commodity prices are even more direct. Despite significant cost sharing with local and state conservation departments, farmers say they don’t have the money to invest in more environmentally friendly practices.

“If a regulator said you need to do something now, this year, that may be the straw that breaks the camel’s back,” Brey said.

“There simply won’t be any [large investments in conservation] in this economy right now,” Niles said.

“Managed grazing, cover cropping, you think of all the different good stewardship practices that may have negative cash flow for a few years before it turns positive,” Dietmann said at a conference in Elkhart Lake in October. “In those first two, three years of the transition to organic, the cash flow gets really really tight for most folks.”

In the current commodity market, there’s not much room for an even tighter cash flow. Even if a lender is willing to finance conservation practices, farmers are less likely to throw those dice until prices rise.

According to the U.S. Department of Agriculture, net farm income has been cut in half since 2013 with four straight years of decline. The department anticipates farm incomes to decline again in 2018.

Peninsula Pride Farms has been able to step into the role of financing some of those stewardship practices. The group helps cover some cost of trying conservation practices, although anything that comes with some out-of-pocket costs to farmers is a tough sell.

Producer-led conservation groups did get some help from the state with a bill authored by Rep. Joel Kitchens and Sen. Robert Cowles. The bill, which is awaiting Governor Scott Walker’s signature, increases the grant funding available to groups like Peninsula Pride Farms by $500,000 in each of the next two years.

The funds could be the only extra cash going toward farmer’s conservation efforts this year.

According to the U.S. Department of Agriculture, net farm income has been cut in half since 2013 with four straight years of decline. The department anticipates farm incomes to decline again in 2018.

Next week we look at farm technology.