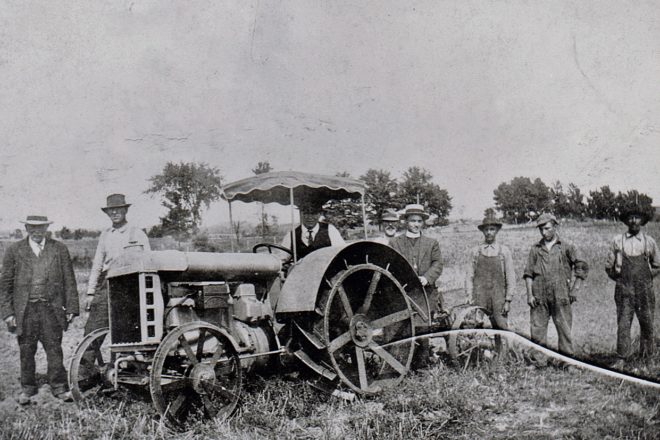 Once upon a time, wheat was king in Wisconsin. It was more than a cash crop. It served as a medium of exchange and was known to be “good as money.”

Planting great fields of wheat did not require large investment in either labor or capital, and there was always a ready market for the end product.

“Most of the settlers who took up land in Wisconsin were persons of small means and the opportunity of becoming the possessor of large tracts of fertile land on easy terms, so that one crop would almost pay for the land itself in addition to the expenses involved in the cultivation of the crop,” wrote John Giffin Thomas in his 1907 doctoral thesis, The Rise and Decline of the Wheat Growing Industry in Wisconsin. “This in its turn put a premium on extensive cultivation and for this sort of culture wheat is peculiarly adapted on the frontier. It required but relatively little labor and capital and with the most careless methods of cultivation yielded large returns at first.”

In the mid-19th century, when Door County was still a lumberman’s paradise, the state experienced its first wheat crop failure. Agronomists of the time suggested crop rotation and soil fertilization were key to recovery, but wheat remained the easy crop for several more decades, until soil health deteriorated to the point where change had to happen.

“The one great cause assigned almost universally for the series of crop failures was that of so-called soil exhaustion due to continued and successive cropping to wheat,” Thomas wrote. “Dairying by 1889 had become the dominant industry of the state. Wheat was no longer the staple. The dairy product was supreme.” 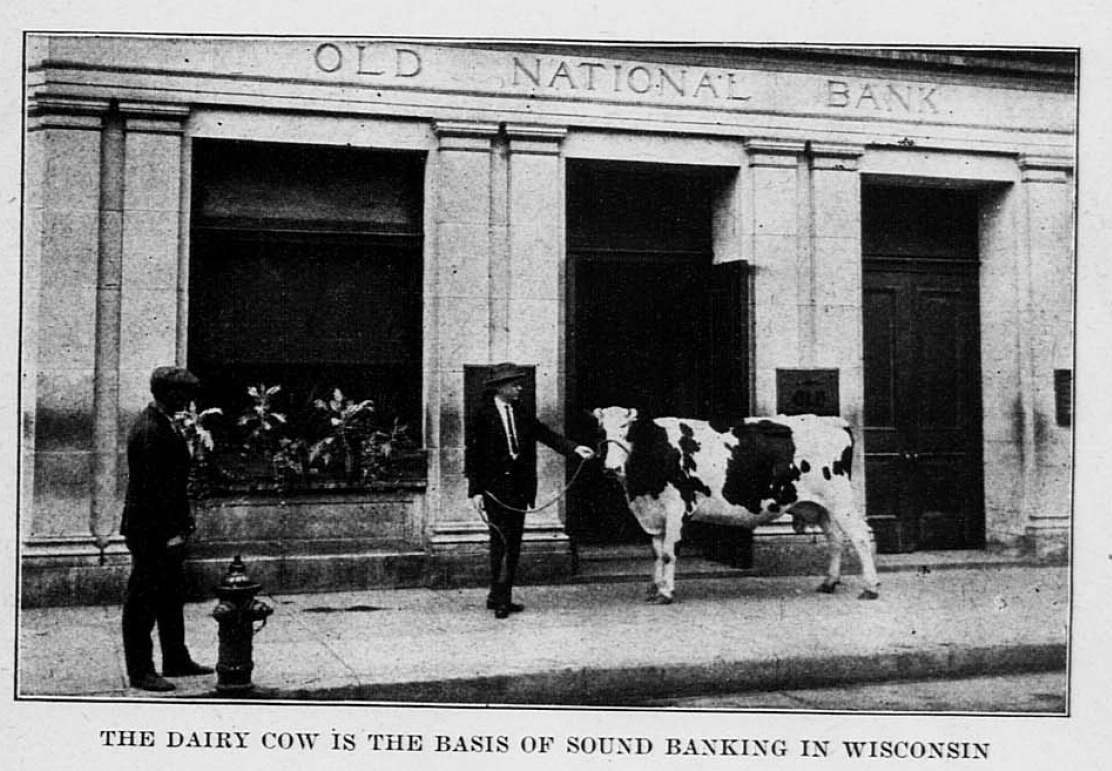 In 1924, University of Wisconsin Economics Professor B. H. Hibbard wrote in a piece titled “What Dairying Has Done for Wisconsin” in the Sept. 1924 The Banker-Farmer News Bulletin:  “Dairying has given employment, at reasonably remunerative rates, to the farmer and his family for the whole year. It has given us a farm of 120 acres in size, not 300 or 400 acres as is found in grain producing states. This means more people on the farms…”

Hibbard concluded his piece on the Wisconsin dairy industry with this thought:  “Wisconsin was made for dairying. The business is here to stay. The people engaged in it are assured of a good living, and with modern equipment, are able to live as good lives as any other class of country people.”

As superintendent of the Wisconsin Historical Society, Joseph Schafer made the following statement about the influence of dairying on the state in his 1922 book A History of Agriculture in Wisconsin:  “Most important of all has been the influence of dairying on the character of the farmer. Business principles, so painfully lacking under the old agriculture, have come to be universally applied in marketing products, and very widely also in the more prosaic features of farm management. The new dairying has made the average farmer something of a scientist, and a good deal of a business man.”

“The cool climate, the excellent water, the abundant yields of clover and other grasses have the county particularly suited to dairying,” Hjalmar Holand wrote in his 1917 History of Door County, Wisconsin:  The County Beautiful. “There are now about twenty-eight thousand head of cattle in the county, not including young stock less than a year old. This makes about seven head of cattle for every family in the county. The value of dairy products is more than one million two hundred thousand dollars.”

Holand, who was not immune to hyperbole, added this:  “Owing to the absence of certain milk bacteria which interferes with the most successful fermentation and curing of cheese in other parts of the state, Door County is rapidly obtaining the flattering reputation of producing the best American cheese in the market. There are now more than sixty cheese factories in the county and new factories are fast being built all over the county.”

All of that leads back to the modern-day farmers. We asked them how dairy came to reign, and they tell the same story.

“You go back to the history of this region and dairy wasn’t in this region,” Lee Kinnard said. “There was a lot of barley. It was a prominent crop and after years of barley the farmers realized, ‘Hey, holy cats, we’re losing our soils. They’re gone. We’re not replenishing, we’re growing barley crop after barley crop.’ The only option then was full-width tillage [the most disruptive to the soil]….My ancestry is Belgian immigrant. They were escaping persecution and settled here, hard working. I don’t think they originally intended upon animal agriculture but as they depleted their soils long term, they decided this is not viable, this is not sustainable.”

“The Germans, Belgians, Dutch, they’re coming from a similar climate as to what they were farming before, in this kind of mid-northern climate,” said Don Niles, a large animal veterinarian, co-owner of Dairy Dreams and president of Peninsula Pride Farms. “This was a suitable place to come. The peninsula which is so great for us is perfect for dairy cows which don’t tolerate the heat very well but can handle the cold just fine. This is the perfect place to be a cow because of the temperature and controls. It’s great climate for cows and they thrived.”

“We are the fifth generation to run our farm,” said Southern Door farmer Eric Olson. “They came from Norway in 1872 and settled on 40 acres and that’s where we started and that’s where the farm still is at. I don’t know how many cows they had at the time but it was probably only a handful at most.” 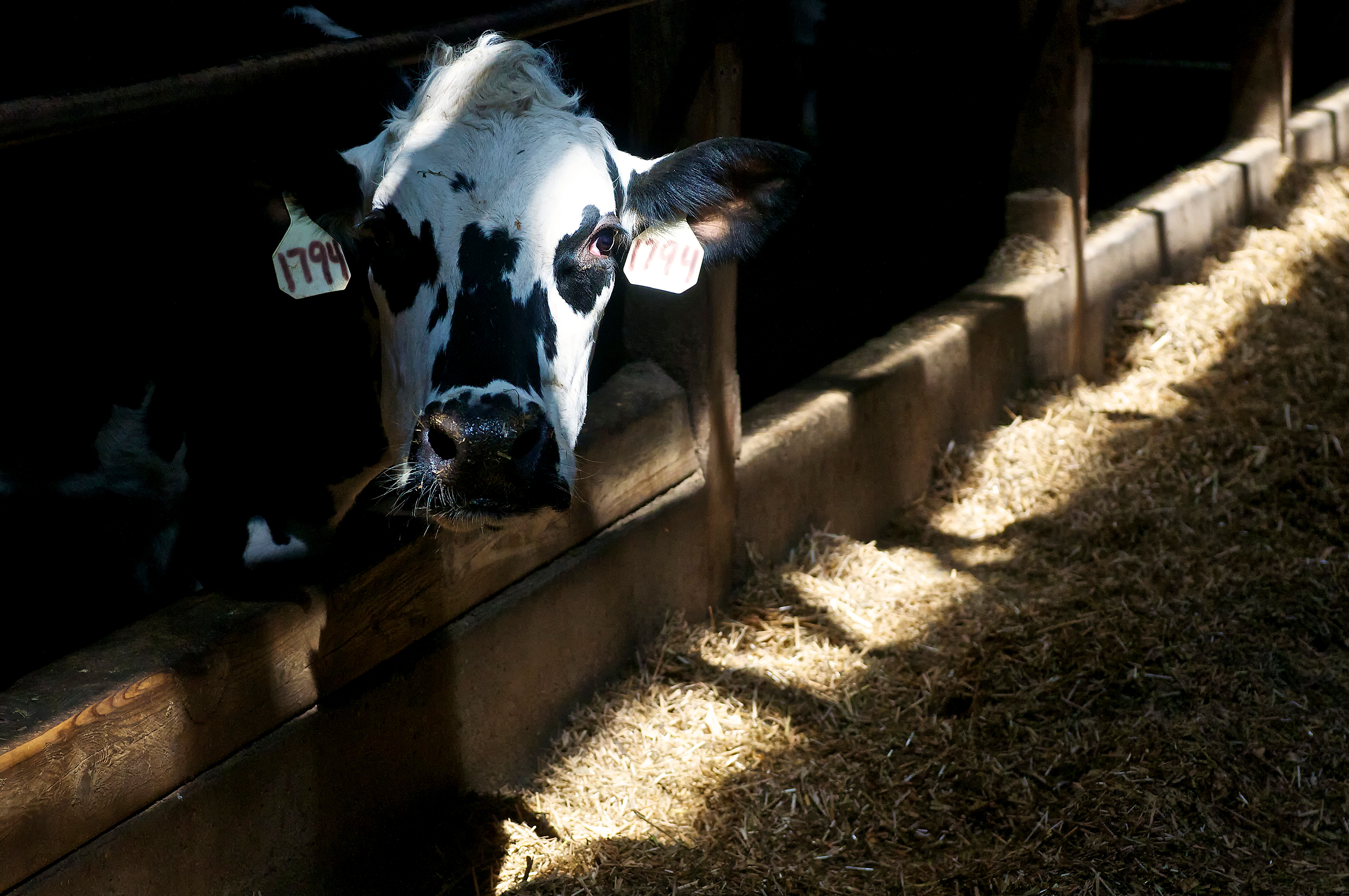 All agreed that in the early years of agriculture on the peninsula it was subsistence farming.

“They had pigs, a few chickens, a couple of cows,” said Tony Brey, another Southern Door farmer.

“A lot of people joked about two cows per person in the family. Ten kids in the family you could have 20 cows,” Don Niles said. “I think another thing is, this is not a tremendous crop growing region. If people tried to compete growing crops here versus central Illinois you’d be at an extreme disadvantage. Alfalfa grows well here and cows thrive here so this is more of a dairy agriculture area than the black soil down in Illinois.”

“When you say crops I think you have to be a little more specific. It’s a phenomenal productive soil but it’s not for grains,” Kinnard said.

“We have a short season and cooler temperatures,” Olson said.

“But we can very effectively grow forage,” Kinnard said. “We grow phenomenal. The guys south of us can’t mimic our crops when it comes to feeding cows. They’re very digestible because of the weather, because of the climate. So it really was a recipe that made sense for this region. I think that’s probably how a lot of it began. The guys figured out this works here.”