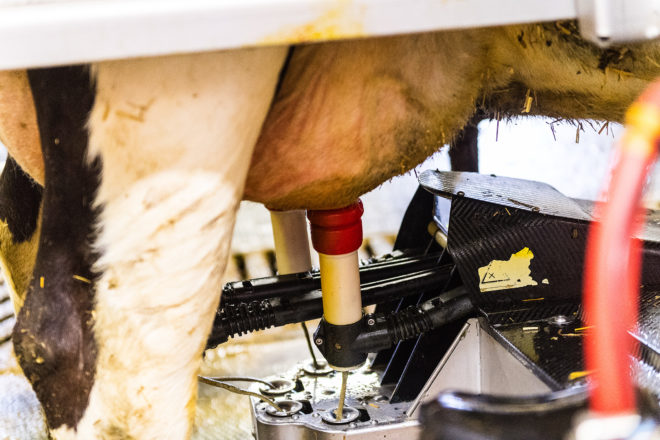 The 100-stall milking parlor at Olson Family Farms in Southern Door was empty when I visited in November. It usually is. In fact, Rich and Eric Olson, the brothers who run the farm, don’t call it the milking parlor anymore. Now, they call it “the museum,” thanks to a huge investment in technology they made five years ago.

It used to be the heart of the operation, the place they gathered twice every day to milk the cows.

Two people would work their way down the stall, performing the same routine every time. Apply a dip to the teat to kill bacteria and clean the udder, then wipe it dry with a towel. Stimulate the cow for about 30 seconds to mimic a nursing calf, causing the cow to let her milk down, then attach the milker. Move over to start the process with the next cow while the milker does its job. Then back to remove the milker, repeating the process for 100 cows in an hour and 45 minutes, twice a day.

Rich Olson figures that milking this way took 21 man hours a day between four people, and that’s the way it was done for most of the last 50 years.

But four years ago the family finally pulled the trigger on an investment they’d been contemplating for a decade, paying $220,000 for a robotic milker.

The Olsons considered putting in two robots, but to justify two robots they would need to run it to capacity with 120 cows. That would require expanding the barn, stalls, and feeding and manure storage. 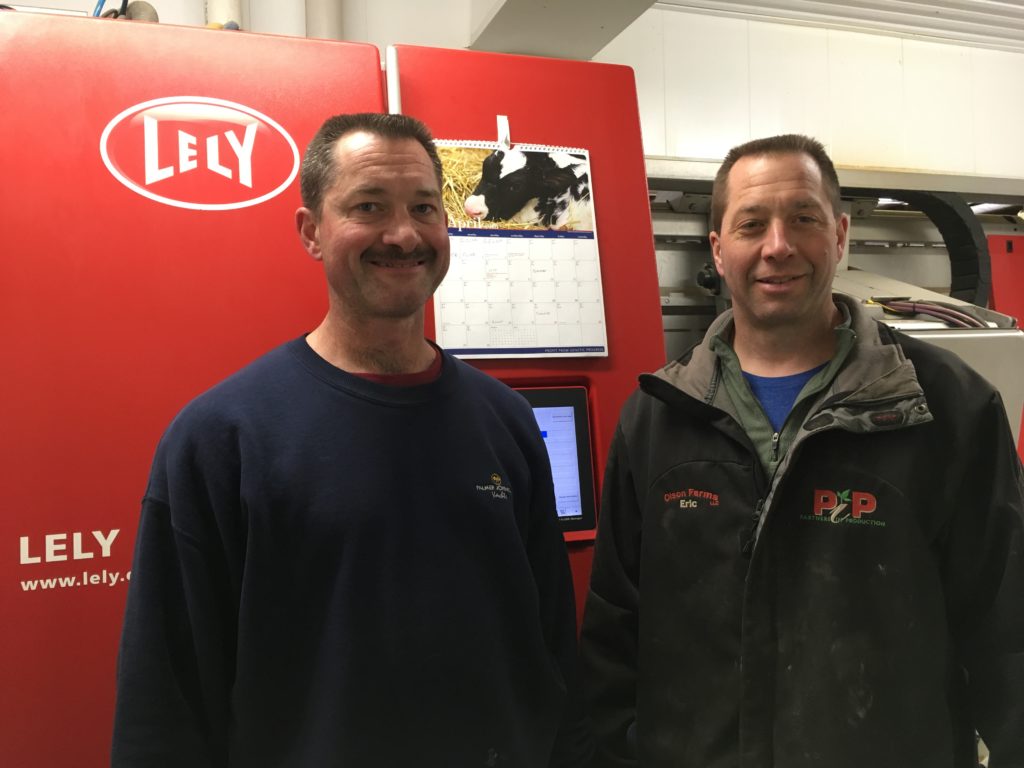 Rich (left) and Eric (right) Olson are the fifth generation of Olsons to farm their property in Southern Door. In 2013 they installed a robotic milker that they say has changed their lifestyles. Submitted.

Instead, they went the other direction. They cut to 60 cows, and now get more milk from 60 than they did from 100. The cows milk on their own time, not the Olsons’, so they now milk three times a day, producing more milk with fewer cows.

The robot is not some Hollywood version of a human clone, but resembles the robots on an automaker’s assembly line.

Cows aren’t brought into the milking parlor en masse. They mill about the stall barn, and when a cow wants to relieve the pressure in its udder, it walks over to the milker. Once there, it gets food, and as it eats a robotic arm swings under the cow, performing each of the tasks the Olsons used to do manually, cleaning the teat, rinsing, stimulating, and milking the cow.

But it does much more. As the robot is milking it measures the temperature, conductivity and color of the milk at each udder. Once it detects the slow in milk flow it releases, so it doesn’t overmilk and irritate the udders.

All of the cows wear a collar that works like a very advanced Fitbit exercise tracker. The collar, Rich said, tells them all they need to know about a cow – how much nutrition it needs, now many steps it has taken, how much it’s eating, and when it milked. If the cow’s activity is off its routine, the robot notifies them. If the cow’s footstep count spikes, for instance, it indicates the cow is in heat and ready to breed. It has a microphone that listens as the cow chews its feed, and counts the minutes that it does throughout the day. The data is all accessible by app or computer.

Twice a day the Olsons check to see which cows haven’t milked on their own and bring them up to the milker.

“It’s our job to use the information that’s provided to us to manage the cows,” Rich said.

All of this was previously done through visual observation, usually as they prepped a cow for milking. “This has eyes on the cow 24 hours a day,” Rich said. “We didn’t.”

“I used to rush to the calf barn to feed them and get right back to work,”  she said. “Now I feel like I get to pay a little more attention to them.”

Rich said the 21 hours a day of milking labor is now reduced to about 5. Greg Abts, owner of Abts Lely Center, which sells robotic milkers, said the payback in labor savings usually takes about seven years. 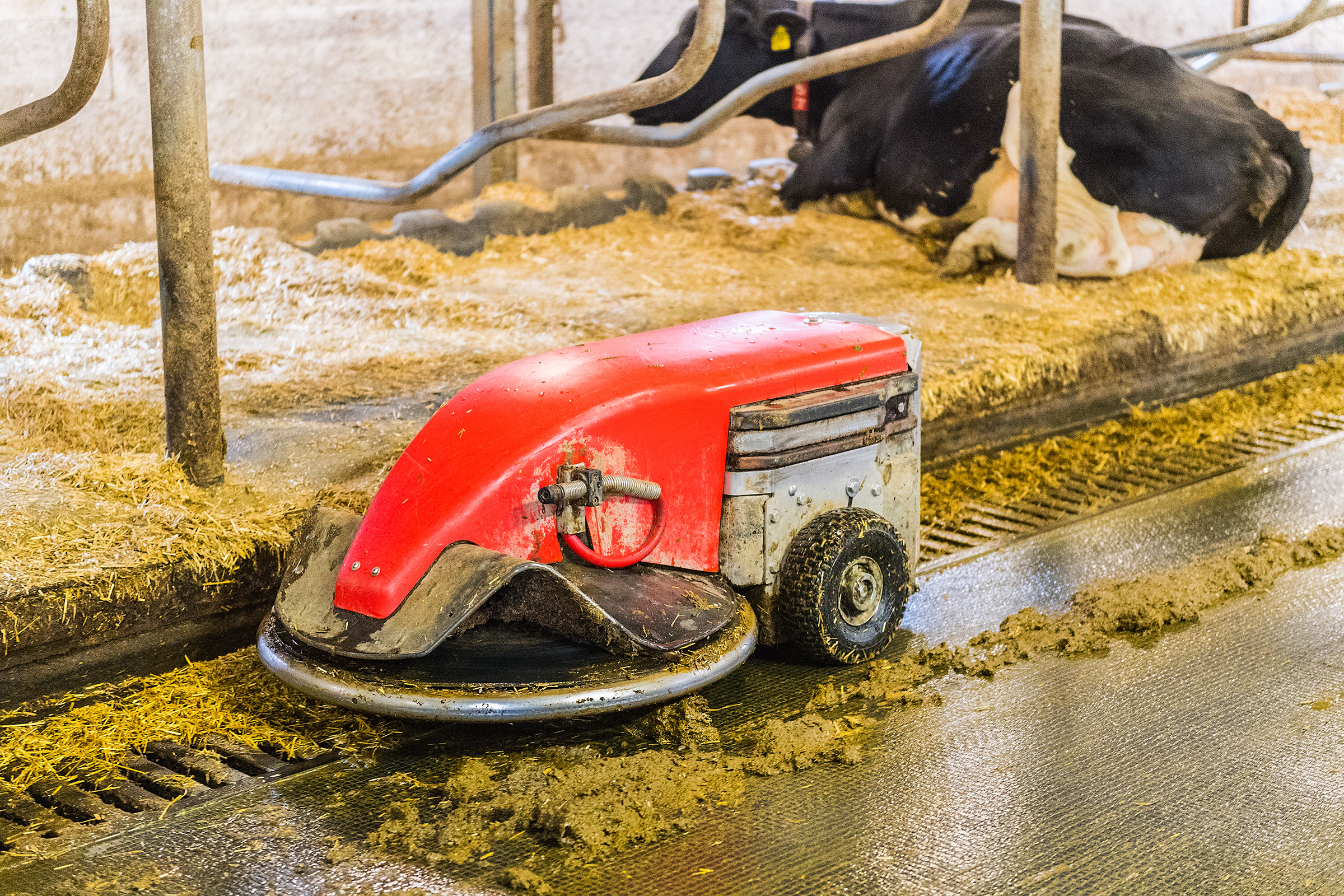 The robotic stall sweeper cleaning the aisle at the farm of Rob and Julie Kiehnau and Andy Kazmarek in Egg Harbor. Photo by Len Villano.

“Larger farms, they do it because they’re having trouble finding help,” he said. “The pay scale for help has gone up drastically.”

But for smaller farmers, the biggest payoff isn’t financial.

“Particularly the guy who is running the farm himself, he’s seeing a life transformation,” Abts said.

Thanks to technology, the fifth generation of Olsons is experiencing a version of farming their parents never imagined. Alan and Judy Olson were milking about 30 cows when they got married in 1965, and expanded to 50 in short order. In the 1970s they expanded again, to 100 cows.

“At that time, we were the only big guys,” Rich said.

They remember their parents sweating every day just to keep their heads above water. At the dinner table there wasn’t talk about technology or vacations.

“They talked about how much they got done that day, or what needed to be done the next day,” Eric said. “They were just happy to be accomplishing what they were doing.”

In the late 1970s and early 1980s, when interest rates rose to 18 percent, it appeared the farm might not make it. They invested in a big barn, a manure storage facility and more cows. Then Alan broke his back. The family scraped by, and Rich and Eric loved the farm, but they felt how hard a life it could be. They’re proud to be part of a generation changing the definition of what farming can be.

“When our kid’s game is at five, we can make it to that now,” Eric said. “We couldn’t before. It’s a better quality of life. More family time. Our parents, when we were involved in things, our parents could never come to those things.”