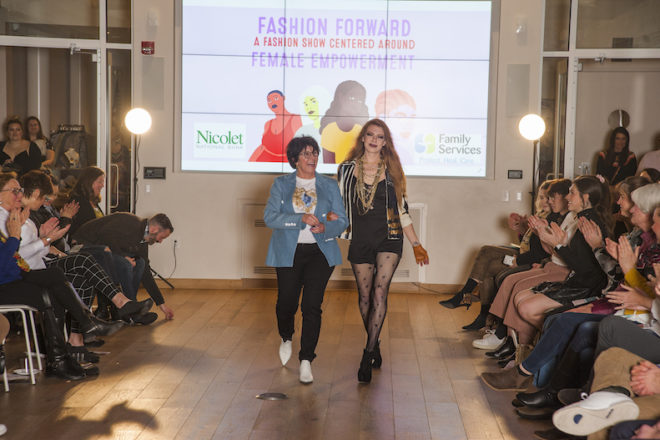 I wasn’t sure what to expect when I walked into the Kress Pavilion on Feb. 29 for the second annual Fashion Forward show. I could only make assumptions based on clips of fashion shows I’d seen on the internet, but what I saw that night was so different and so much better than I could have imagined.

I arrived early to get a front-row seat. It was my best friend’s first time walking in a fashion show, and I wanted to be right in front to cheer on this amazing woman. The room eventually filled with many other people who were also there to support the extraordinary talent of their friends and family members.

But how did the Fashion Forward show start?

Claire Erickson grew up in a home where her family was always asking what they could do to make the world a better place. Her mother was a sociology professor who taught courses on race and diversity and is now a social-justice activist, and Erickson took cues from her mother as she explored her own passions.

When she began the show, Erickson – an artist with a passion for fashion – was a visual merchandiser and buyer for Target. Her job was to teach people how to put together outfits, track fashion trends and understand how they relate to current culture.

During this time, she was asked to walk in a fashion show that benefited a breast cancer organization. Unsure about walking a runway, but intrigued by the idea of a fundraiser fashion show, she decided to participate. And it inspired her to begin organizing her own.

“I thought, ‘This is really cool, and Door County doesn’t have anything like this,’” Erickson said. “And it might be kind of weird because I don’t know how many people in Door County have experienced a fashion show, but I thought this was something that could be cool in the off-season.”

She chose female empowerment as her show’s focus: There would be diversity among her models, and proceeds would go to an organization that supports women. This year the recipient was Family Services’ Sexual Assault Center.

“With the focus being empowerment, I really wanted to not only be diverse in the sense of skin tone,” Erickson said. “To me it was important to have models of all sizes and heights and ages.”

Choosing those models ended up being a harder task than she’d anticipated. After a public callout for models yielded a rather homogeneous response, Erickson knew she had to get more creative to find the wide diversity she was seeking. She turned to her friends, who told their friends; and she approached strangers if they were what she was looking for.

Many of them responded, “Me? I’m not a model.” But that was exactly Erickson’s goal: “I want people in the crowd to say, ‘That’s like my sister; that’s like my mom; that looks like me,’” she said.

And she pulled it off. Those who walked in the show weren’t trained or coached. They were simply told, “Here is the mark you need to hit,” and “Vibe with the music.” That was easy for those who had done it before and more intimidating for runway first-timers.

As the designers’ works were presented one at a time, and you could feel the crowd’s love for each model. Although many had never done this before, they fed off the energy in the room as they strutted down the runway in their own individual way.

Erickson’s other hurdle was finding designers. During the first year, she worked with some local designers. After that, she started receiving inquiries from people around the state and even a designer from Chicago. As her show grows, so do the reach and interest.

Erickson also put a lot of effort into curating the show’s music. She asked for advice from friends who have done music for Fashion Week in New York and Paris but their suggestion of “Parisian, underground rave music” wasn’t the vibe she was going for.

Instead, Erickson studied the looks of each designer to get a feel for their personal style. When she found possibilities for complementary music, she played it while walking around her apartment to see whether it worked. The result was a blend of tunes that flowed seamlessly from one look to the next and connected the designers into a cohesive show.

With Fashion Forward 2020 complete, Erickson is brainstorming ideas for the shows to come. Some ideas she’s pondering are featuring only minorities or only older women, and increasing student participation. No matter which direction she takes future shows, her goal is always to create an event that supports, celebrates and empowers women.