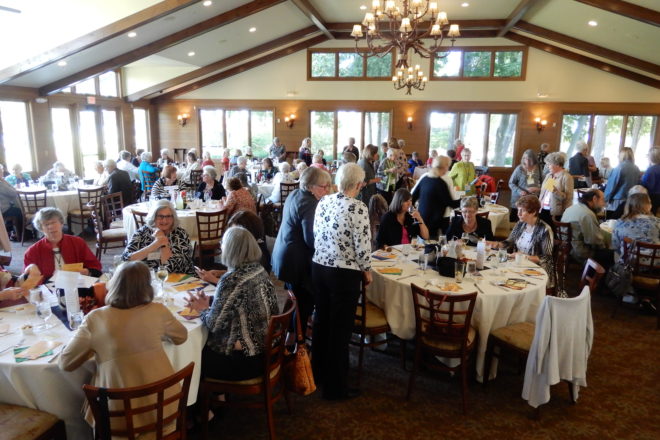 Scand Auxiliary members and guests gathered for the event.

The 147 people who attended the 30th annual luncheon and style show sponsored by the SCAND (Senior Citizens Agency of Northern Door) Auxiliary didn’t show up just for food and fashion. The meal was delicious and bountiful, and the models’ outfits – all from Bargains Unlimited, the auxiliary’s remarkable resale shop in Sister Bay – were lovely and low-priced. Those were good reasons to spend a pleasant afternoon at Gordon Lodge.

But the thing that drew the crowd to the Dress to the Nines event on 9/9/19 was the knowledge that they were helping the residents and staff at Scandia Village, as the auxiliary has been doing for 38 years.

The idea for Scandia Village, a retirement and nursing home in Sister Bay, was first proposed in 1975, and it opened its doors six years later with 20 residents. There was an immediate need for volunteers to assist residents with activities such as letter writing, crafting, reading, nail care and party coordination, and more than 100 men and women became charter members of the newly formed SCAND Auxiliary in 1981.

As they moved around Scandia Village, the volunteers noticed the need for much more than helpful hands. Funding could support a bus, van, activities, craft programs, bathing chairs, kitchen equipment, the Staff Scholarship Fund, nursing equipment and the chaplaincy program.

In 1990, the late Shirley Rosenquist organized the first style show in a restaurant that’s now the Unitarian Universalist Fellowship of Door County. A year later, former president Rae Porter began selling used clothing once a month in the all-purpose room at Scandia Village, and auxiliary members dreamed of opening their own store in addition to holding bake sales and book sales.

In 1991, Regina Daubner let them use the empty building in Ellison Bay that had been her grocery store. Rosenquist reported later that, from the end of June until just after Fall Festival that year, they took in $1,600. Today Bargains Unlimited – in its own twice-expanded building at 10560 Applewood Road in Sister Bay – averages about $2,000 in sales every day! The auxiliary’s 266 members volunteered 1,619 hours in August.

Although the store began as a place to find tremendous bargains in clothing, it now also includes accessories, housewares, small electronics, furniture, lamps, books, music, linens, sporting goods and holiday décor. (Christmas merchandise is big now and will continue to grow until mid-December.)

With all of those offerings, Bargains Unlimited has garnered a dedicated following of customers who come from as far away as Manitowoc, and the volunteers who staff the shop get to know them as friends.

Members of the style show committee included Connie Kreif, Wendy Graf, Denise Schramm, Barb Olson, Doris Thompson and Cheri Boock. There were 13 models, and the show was narrated by Paula Hedeen, a longtime Scandia Village “end-of-life volunteer” – one of the people who ensures that no one dies alone.

The goal for the luncheon and style show was to raise enough money to buy two defibrillators for Scandia Village, with an anticipated cost of about $3,000. Money raised from the sale of the models’ clothing, jewelry, shoes and purses – as well as raffle items and gift certificates donated by local merchants – totaled $3,140.

If that sounds like a lot to raise in one afternoon, consider this: During the past 38 years, the auxiliary has raised $5,302,006 (and 55¢) to benefit Scandia residents and staff. Through the years, this money has helped to fund the Birchwood Wing, which houses the special care unit for Alzheimer’s patients; $2 million of it went to the new Woodview Building and additions; and it fully funded the first 13-passenger bus with wheelchair accessibility, two pickup trucks and other major equipment.