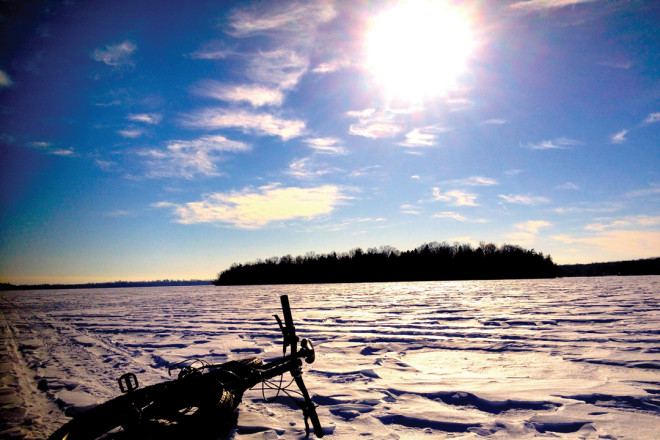 The burly hum of the tires on dry pavement is akin to a semi-truck barreling down an empty highway on an otherwise quiet night. The sound is incessant, relentless and transformative. The consuming roar envelops the rider. In turn, the rider becomes emboldened atop the two-wheeled behemoth and once pavement is left behind, the rider sneers in glee at previously imposing terrain.

Of course, riding a fat bike on pavement is a bit like driving the speed limit in a sports car – sure, there will be a few stares, but there’s a trove of mischief to explore. And soon the devil grinning on your shoulder gets the better of you, and bona fide joy ensues.

By definition, a fat bike is a bicycle with oversized and aggressive tires – typically 3.7 inches wide or more. In the mid-1980s, a few industrious folks in Alaska started building fat bikes to ride in the snow, while simultaneously a few others were building wide-tired bicycles to ride on desert tours in New Mexico. 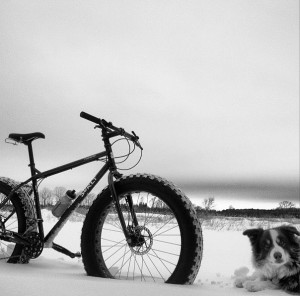 The amalgamation of such efforts provides a perfect backdrop to the purpose and ethos of riding a fat bike:  they can go just about anywhere. Despite the cumbersome appearance of fat bikes, a ride proves them to be quick and easily maneuverable.

A few years into the 21st century, the fat bike trend led to mass production by a few manufacturers, and thus a new multi-terrain and multi-use cycling option had arrived. Fat biking has proven to be more than a gimmick or novelty, as these bikes have become especially popular in the upper Midwest. Fat-biking, hearty Midwesterners seem to enjoy defying winter as they don Cuddl Duds and sweaters beneath their spandex and pedal into a blizzard.

The diverse landscape and seasonality of Door County provides a sensational canvas upon which to leave the muddy fingerprints of those wide tires. Local rider and Baileys Harbor resident Luca Fagundes has owned his fat bike for about a year and a half. Fagundes purchased his bike in order to ride in winter, and quickly appreciated the diversity of these machines.

“The best rides I’ve had in Door County include lightly snow-covered trail riding, sand and even ice – all in one ride,” says Fagundes enthusiastically.

“Fat bikes are truly in their element on wet sand and the exposed roots and rocks of our trails,” he adds, noting that the low tire pressure recommended for fat bikes allows for a plush riding experience. Another memorable ride for Fagundes included visiting with ice-fishermen on Kangaroo Lake in subzero temperatures.

The issue of where these bicycles are allowed to ride legally quickly became relevant as they began to appear in all manner of locations. Peninsula State Park Superintendent Kelli Bruns points out that fat bikes “are allowed on our trails except those that are snow covered and groomed for cross-country skiing.” 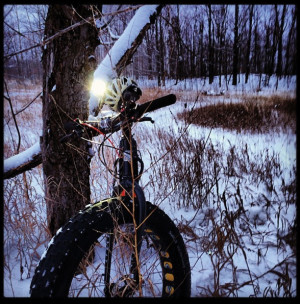 The Wisconsin DNR provides insight into bicycling on snowmobile trails, “Fat bikes are allowed on multi-use trails also open to snowmobiling.” Though it is important to note that much of the snowmobile trail system in Door County is on private land, thus limiting bike access to only those trails within the state parks.

Another opportunity to ride exists at the northern reaches of our peninsula in Newport State Park, which opened a trail specifically for fat biking and snowshoeing last winter.

The sundry of options to ride speaks to the increased demand that Brian Merkle of Nor Door Sport and Cyclery in Fish Creek has witnessed, as he intends to expand his fat bike rental fleet this winter. Further inquiry revealed that purchase options at Nor Door include fat bikes manufactured by both Surly and Trek.

It seems clear that fat biking has taken root in Door County, as the culture, tempo and characters who call this place home mesh seamlessly with the alternative. Visitors will find these grandiose bicycles available for rent year round, as the experience of being atop a fat bike doesn’t end when the snow begins to fall.

The transformative sound of a ride awaits those who embrace the tugs of curiosity.