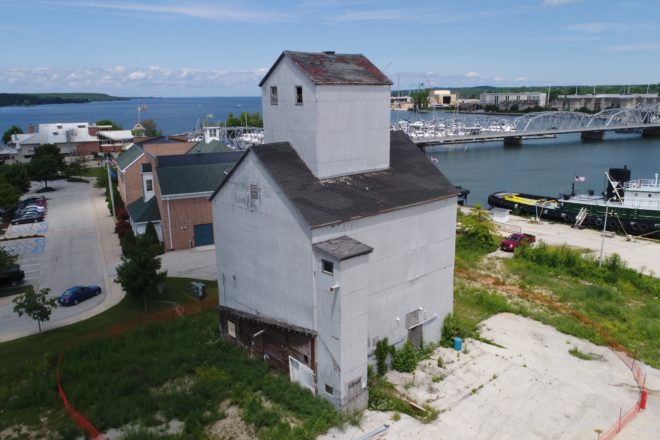 The Sturgeon Bay Common Council could decide the fate of the Granary Building on the city’s west waterfront at Tuesday’s council meeting.

The agenda includes a closed session in which the council will confer with its attorneys about its options given that Fire Chief Tim Dietman has ordered that the building be torn down for public health and safety reasons. The council will then consider in open session a contract to raze and remove the structure.

On Monday the Sturgeon Bay Historical Society (SBHS) upped the ante in their efforts to save the structure from the wrecking ball. In a press release SBHS offered to cover the cost of razing the structure “if a qualified structural assessment determines that the structure cannot be saved and must be torn down.” The organization would also pay for any additional insurance riders the city needs until the assessment is complete.

That comes on top of $1.25 million that an anonymous donor has pledged for stabilizing and restoring the former Teweles and Brandeis Grain Elevator, which dates to 1901. It was placed on the Wisconsin Registry of Historic Places in August. The city’s Historic Preservation Committee voted last week to urge the city to make every diligent effort to save the granary.

Dietman ordered the structure razed Oct. 17 based on a complaint from a waterfront worker who said the structure appeared to be moving. City staff inspected the structure and determined it was unstable, though the city has not released the information used to make that determination.

In 2013 a comprehensive structural analysis of the granary was done by the engineering firm Meyer Borgman Johnson. The firm determined that the structure was salvageable, estimating that $150,000 was needed to stabilize it. It will cost between $53,000 and $85,000 to raze the structure.