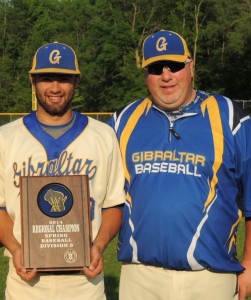 Kita has played four years – 84 games – of varsity baseball. He has a career batting average of .481, including 137 hits, 66 stolen bases and 65 RBIs and a career fielding percentage of .968. He was chosen to the All-Conference first team each season (unanimously three times), his freshman and sophomore seasons as an infielder and his junior and senior seasons as a catcher.

Gibraltar’s coach Jay Kita, also Nick’s father, has been selected as one of the three North team coaches, along with Bill Miller from Denmark and Craig Kloes from Sheboygan South. Jay reached a career milestone this year by earning his 100th career coaching win. He also led the Vikings to a regional championship this past season along with reaching the sectional finals. He has been coaching at Gibraltar High School, his alma mater, for the past 14 years, 11 as the head coach. His teams won Conference Championships in 2010 and 2013 and Regional Championships in 2008, 2013 and 2014.

The WBCA (Wisconsin Baseball Coaches Association) sponsors this tournament to promote baseball throughout the Badger State, and to be recognized as one of the strongest Coaching Associations in America. For more information visit baseballwisconsin.com.