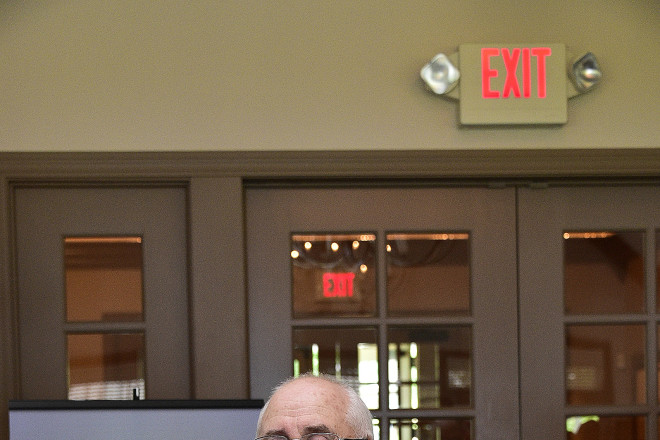 Father Anthony Birdsall – or Father Tony as he is known – retired from the Corpus Christi Parish in Sturgeon Bay on Sept. 1, 2008, but continues to have an impact on the people of Door County, as evidenced by his being named the 2014 Philanthropist of the Year at the Door County Community Foundation’s annual Celebration of Giving held June 18, 2014, at Horseshoe Bay Golf Club in Egg Harbor.

The 79-year-old Catholic priest was ordained in 1960 by Bishop Stanislaus Bona at St. Francis Xavier Cathedral, Green Bay. His first non-temporary assignment was as chaplain for the Holy Family Medical Center in Manitowoc and assistant of the St. Bernard Parish, Green Bay, until 1964 when he was named assistant of the St. Mary Parish, Appleton. In 1970 he became temporary administrator of the St. Aloysius Parish in Kaukauna, and in 1971 became pastor of the St. Mary Parish, Hilbert. On Aug. 18, 1987, he was named pastor of the Corpus Christi Parish, Sturgeon Bay, where he remained for 21 years before his retirement. During his time in the Corpus Christi Parish, he oversaw the building of a rectory in Sturgeon Bay and the merger of Corpus Christi and St. Joseph schools, Sturgeon Bay, and Ss. Peter and Paul School, Institute, into St. John Bosco School.

Although retired, Father Tony is constantly filling in from the southernmost to the northernmost parishes on the peninsula, saying masses twice a month on Washington Island.

Father Tony has given tirelessly and quietly within the entire community. His love of children has inspired him to give of both his time and his treasure. To this day, he has playground duty at St. John Bosco and takes time to have lunch with the children. His love of farming and farm animals has made him a fixture at the Door County Fair, where he has taken ribbons for both his chickens and his flowers. He stays involved in 4H and Rotary projects as well.

“Philanthropists champion the causes that resonate in their heart,”? said Bret Bicoy, president & CEO of the Community Foundation. “They cannot help but openly share their passion with those around them. Their enthusiasm for service is contagious.”

“Most importantly,” said Bicoy, “a philanthropist is one who believes that the best way to lead is by serving others.”