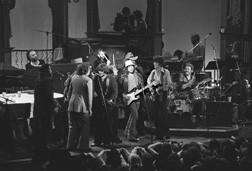 The great concert film The Last Waltz should be as traditional as Tofurky and sweet potato pie at Thanksgiving. Filmed by Martin Scorcese at the Winterland Ballroom on Thanksgiving 1976, it features The Band in their last concert with friends such as Bob Dylan, Emmylou Harris, Van Morrison, Joni Mitchell, The Staple Singers and the two Neils (Diamond and Young). It begins with this admonition: “THIS FILM SHOULD BE PLAYED LOUD!” Crank it up to drown out the football and turkey ennui, and grab another tempeh drumstick. Yum!

Every autumn, when I’m craving something dark and spooky, I slip Sleepy Hollow in the DVD player. My favorite of the Tim Burton/Johnny Depp collaborations, this film presents a twist on the legend of the headless horseman. There are plenty of head-loppings, but with Burton’s stylized, artistic touch (so it’s not too scary). There is also comedy (Depp’s character is a bit of a spaz), mystery (who’s controlling the headless horseman?), and love (every good movie needs a bit of that).

In November, when the days get painfully short and cold, I can finally make myself sit still long enough to watch a movie. While I have plenty of favorites, there’s one movie that always tops my fall flick list: The Jerk. There are so many good moments in this film –the birthday dinner, the phone book, the escargot – you just can’t go wrong. This is also a good one to watch with the family since it’s not too raunchy and there are gags that will get young and old giggling together.

The apocalyptic television show The Walking Dead is completely atypical to the shows/films I normally turn to when I want to enjoy a cozy night at home.

There is a definite revulsion and attraction when watching. What happens in the course of the show is this: the show begins, I predict when a zombie will appear or some form of violence will take place, I turn away from the screen and turn back just in time to see what I predicted happen. This push and pull continues for the full length of the show, and at the close I feel equal parts horrified and satisfied.

At every single viewing my intelligence is reaffirmed. I can predict when bad stuff is going to happen – leading me to believe that if I ever had to live through a zombie crisis I would be just fine…although probably not, as I cannot get a peaceful night’s sleep after watching.