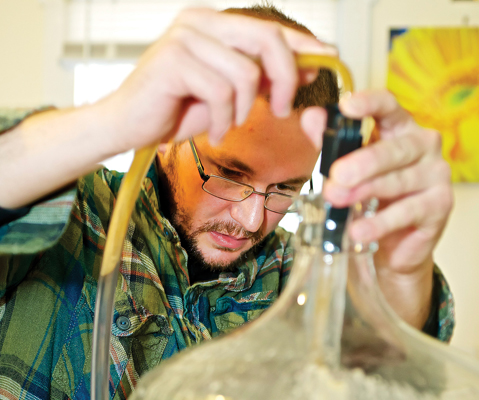 Have you tried this oak-casked triple black IPA brewed with monkey-picked coffee beans by three blind monks living in the basement of the Rock Island Lighthouse?”

This may not be barstool conversation at the local tavern (yet), but it’s hard not to notice the increasing array of craft beer and spirits behind the bar. There seems to be a lack of a personal touch from our food and drinks in a culture where the words artisanal and handcrafted convey not only quality, but also the character we thirst for. 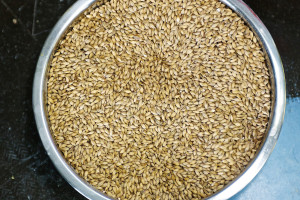 Even the big breweries have been putting out beers lately that sound like they were made by someone’s grandpa down the tree-lined street (Rule is:  If they can afford a television commercial, they are one of the two big brewers.)

But chances are, someone’s grandpa down the street does make beer, and so can you. If authenticity is what we crave, homebrewing a one-of-a-kind, taste-tailored beer is as simple as boiling, stirring, and having a little patience.

Homebrewing was only re-legalized since Prohibition in 1979 by homebrewing President Jimmy Carter (although Jefferson, Washington, and, most famously, Samuel Adams were also all avid homebrewers.) Even still, antiquated brewing laws still remain intact across the country; only last year did Wisconsin Governor Walker, with a push from Wisconsin homebrewers, sign a bill allowing the transportation of homebrewed beer from the home “brewery” – it technically wasn’t legal to take homebrew out the front door!

Selling homebrew is still very illegal, but that only encourages homebrewers to share the joy of fresh beer. And, besides being both 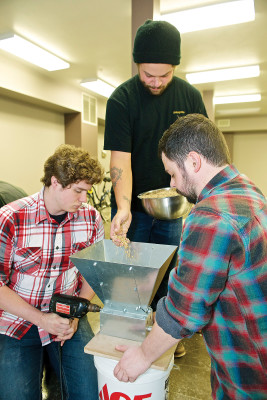 patriotic and legal, it is also very safe to brew at home (no pathogens or harmful bacteria can live in beer’s acidity or alcohol level.)

For some, homebrewing has become far more than a hobby. Danny McMahon, head brewer at newly-founded Door County Brewery in Baileys Harbor, began brewing on his electric stove in St. Paul, Minnesota one afternoon. No longer brewing five gallons at a time, McMahon now churns out 10 barrels’ worth with each batch, but he explains that the process isn’t all that different.

“Making beer at home can be as time and energy consuming as you want it – and it doesn’t take a whole lot to get started,” McMahon says. “If you can follow simple instructions then you can make beer. There are a ton of homebrew stores that have really great recipe kits already designed if you are afraid that you can’t come up with a recipe on your own. Remember, homebrewing should be a fun process and shouldn’t be taken too seriously. It’s a great way to spend an afternoon or evening.”

No matter the style of beer, the process of homebrewing is essentially the same basic set of steps. Recipes can become very advanced with more fermentations, yeast cultivation, and any number of flavor additions, but here are the most basic elements of making beer.

The very first step is to sterilize every piece of equipment that will come in contact with the beer, 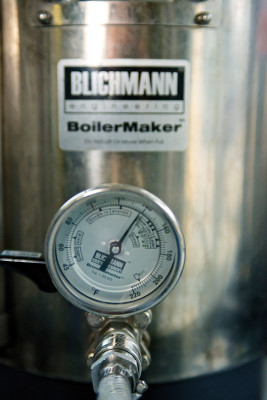 bottles and caps, tubes, funnels, everything. A foaming sanitizer will often come in any homebrew start-up kit; it’s just a quick mix with water and rinse. Cleanliness is the most crucial part of homebrewing; a thorough sanitization is easy and just makes for better beer.

This step is as simple as making a bag of tea – a big bag of tea. In not-yet-boiling water, steep a bag of cracked barley for about half an hour. This extracts the flavors for the base of the brew. The grain left over from this step is no longer needed in the process, but it can be used for baking or just be composted.

Get ready to stand by the stove for an hour or two – but relax and have a beer or two and it won’t seem like such a chore. Bring the barley “tea” to a boil and add malt (either an extract or a powder) and then add hops in stages (each recipe is different). Hovering isn’t necessary, but keep a watchful eye because inevitable boil-overs will happen easily and hops are not known for being easy to scrub off the stove.

Sparging is just the brewer’s term for cooling down the boiled mixture, or wort. This can be done by having an ice bath ready in the sink, or by adding a gallon of ice water. Cooling down the wort fast to the correct temperature produces a less bitter beer, so the piece of “fancy” equipment most recommended for a homebrewer is a wort chiller, which is essentially a coil of copper piping that is connected to the faucet with cool water running through it, quickly cooling down the wort. 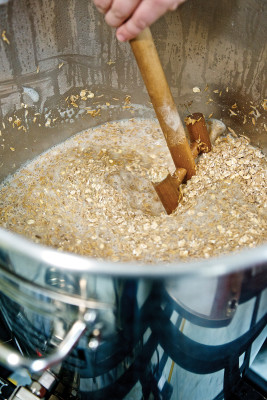 Funnel the cooled wort into a glass carboy or five-gallon bucket, then top off with water for a total of five gallons. The yeast is now added and the container is topped off with an airlock. Store in a dark, room temperature corner for a few weeks, or until fermentation has stopped. See that the airlock will bubble steadily with carbon dioxide for at least a week. When the bubble stops completely, all the sugars in the malt will have been converted to alcohol by the yeast.

At this point, it is essentially flat beer. Avoid any vigorous pouring or aeration; a siphon should be used to transfer the beer from the fermenting container to a bottling container (this helps avoid any sediment). Before bottling, a small amount of sugar is added to the container. The leftover yeast will continue to digest this sugar in the bottles, creating carbonation as it ferments again for a few weeks and…you have just made your own beer.

And it doesn’t get anymore authentic than that!

For more information, check out The Complete Joy of Homebrewing by Charlie Papazian, a charming  book on beginning homebrewing. There are also numerous videos, message boards, podcasts and groups online for answering questions and igniting inspiration. Happy brewing! 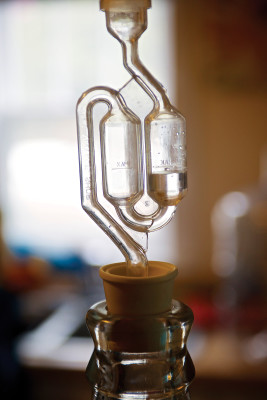 The craft beer craze may have come late to Door County, but when it arrived last year with the first Door County Beer Festival it found a thirsty audience.

More than 1,100 people crowded the grounds of the first festival last June, clamoring to taste more than 150 craft beers and sample the creations of some of Door County’s best chefs.

Producer John McMahon set out to make year two even bigger and better.

“We learned a lot last year,” he says. “The main thing was that there was more demand for this event than even we imagined!”

McMahon has added a Rare and Cellar Beer Swap to the second edition of the festival, giving beer lovers an opportunity to try beers normally hard to find or unavailable in northeast Wisconsin.

The Door County Homebrewing Championships return as well, with prizes in 11 different styles.

The event will feature a larger beer tent, more food vendors, and more live music. Three bands will hit the stage, headlined by local favorites Highland Road and Michigan roots band Lindsay Lou and the Flatbellys. (Rumors of a third “special guest” band have been floated as well.) 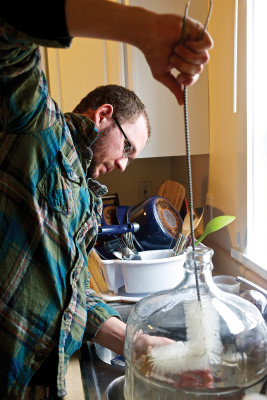 McMahon and co-producer Dave Eliot have made the festival as much about culinary arts and music as it is about beer. Some of the peninsula’s finest chefs will be on the grounds grilling and creating with locally sourced ingredients. A full list of restaurants can be found at www.doorcountybeer.com.

“We’re out to showcase all aspects of Door County’s culinary scene in a way that nobody has before,” Eliot says. “We don’t celebrate our food culture enough.”

This year that celebration focuses on the area’s cheese makers, with the folks from Schoolhouse Artisan Cheese and the Door County Creamery on hand. Marieke Penterman of Holland’s Family Cheese in Thorp, Wisconsin will make a special appearance for the festival’s VIP ticket-holders. Penterman comes fresh off being honored as the 2013 U.S. Champion Cheesemaker.

So, whether your love is music, cheese, local food, or the best in beer, the Baileys Harbor Town Hall Park is your destination June 15.

Getting creative with ingredients is what sets homebrewing apart from just drinking regular beer. Many favorite flavors can translate well to brewing, it’s just a matter of trying different ingredients and techniques and eventually learning what works and what doesn’t. This is a recipe for a deep, dark, full-flavored ale with ginger and apple aromas. 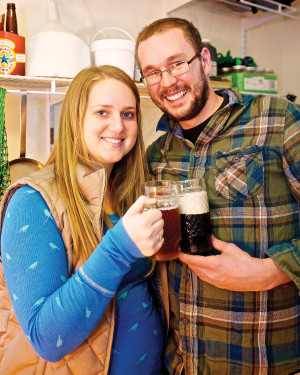 Add crystal malt in a mesh bag to 1½ gallons of hot water (160 to 170 degrees F.) and let steep for 30 minutes, then remove the bag of grains. Add the malt extract, ginger, and the boiling hops and boil for one hour. Throw in the finishing hops during the final one-minute of boiling. Strain, sparge, and pour into the primary fermenting container with an additional two gallons of cold water. Top off with the apple cider. After it has cooled, add the yeast. Cap and airlock and ferment to completion over the next few weeks and then bottle.