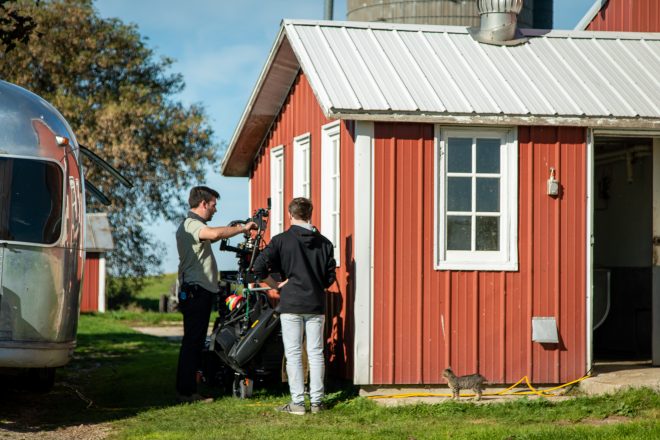 A film crew shot footage in a pasture near Townline Road and County T, northeast of Valmy, on Oct. 19. Filming also took place in this barn at the same site. Photos by Rachel Lukas.

While peak fall colors attracted tourists to popular spots this past week, it was pastures and cattle farms that brought a Childe film-production crew to rural portions of Door County, partially blocking a less-traveled section of Townline Road Tuesday morning as it began shooting scenes and B-roll at locations throughout Door County.

Producers for the independent feature film God Loves the Green Bay Packers said their director and actor Craig T. Nelson are trying to keep things low key, but the production’s not top secret either.

The film-information site IMDb said the drama was inspired by the writings of Wendell Berry and carries this plotline: “A young, struggling musician living with her grandparents on a dying family farm must attempt a Hail Mary play to save their life’s work and the legacy of four generations.”

In addition, Green Bay Community Church put out a call on its website for extras for the movie that “celebrates everyday saints, the natural world and a community of grace.” The film extras were needed for a church scene in Brussels, a fish boil in Baileys Harbor and a tailgate scene in Green Bay.

On Tuesday evening, the Sturgeon Bay Common Council approved a request from Destination Sturgeon Bay to close 3rd Avenue between Jefferson Street and 5th Avenue, Nov. 1-3, 4 am – 5 pm, to accommodate the film crew. During that time, there will also be a scene with a tractor driving over the Oregon Street bridge.

The Childe production crew used parking spaces at one farm near Townline Road earlier this week. Production staff showed up to lay groundwork and scout for shots about two months ago, and some crew members have enjoyed the hospitality at local farms, said West Jacksonport landowner Tom Lutsey of Waseda Farms.

Lutsey said crew members have also used an old farmhouse that he owns and made a few slight alterations, but he did not provide further details about what he knows regarding the production.

A camera operator with the film crew shot some video of producers Aaron Boyd and Davin Lindwall when they took a brief break to answer some questions.

“The general gist is, it’s about an old-time farmer trying to save his family farm from going under,” Boyd said.

— Debra Fitzgerald contributed to this story