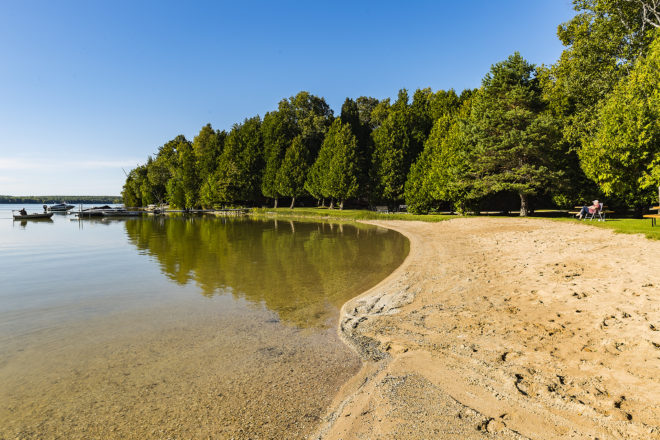 In the 1920s, East Shorewood Cottages, on the southeast shore of Kangaroo Lake, were the vacation site for a Chicago family of six headed by Charlie Miller. He and his son, George, and two of George’s high school classmates built the first cabin on five acres purchased from a neighbor for two or three dollars per shoreline foot.

Eventually there were 10 cottages, a central bathhouse and several outhouses with names such as Edgewater Beach and The Ritz. Four other families owned the resort after the Millers sold it in 1949. Those families converted porches to bathrooms with showers and installed running water, gas lines and a holding tank.

Since 1988, the cottages have all been individually owned, but they are still available for rent during parts of the summer and fall seasons. Trudy Erickson Rasmussen, who grew up on a nearby dairy farm, has managed East Shorewood for nearly 30 years and notes that there are usually open dates in May, early June and from late August through September.

It’s easy to see why a resort that began nearly a hundred years ago as a vacation spot for a single family continues to attract other families. “People often ask me what makes a resort on a small lake different from one on a big lake,” Rasmussen said.

“And I tell them it’s just what they said: a small lake. Kangaroo Lake warms up in the summer a lot earlier than Lake Michigan and Green Bay, and it stays warm later in the fall. It’s shallow, too, with an average depth of six feet. The cove where East Shorewood is located is even shallower — just five feet at our swim raft, anchored 100 feet offshore. It’s a major milestone for kids when they can swim out there alone.”

From the beginning, the lake has been the resort’s prime attraction. At the edge of the sand beach, the depth is just right for wading. Kayaks, a canoe and a paddleboat are included, and guests may dock their boats at the pier. Many families gather at the fire pit near the beach at night, and some have even placed permanent benches there in memory of loved ones.

The grounds are much as they were in the 1920s — minus the bus that a nervous former owner buried to use as a fallout shelter during the Cold War era. There’s a large field for baseball games, a picnic area, horseshoe pit, carpetball table,  pingpong table, volleyball court and children’s playground near the cabins. “One thing families love about this place,” Rasmussen said, “is that it’s quiet and peaceful and safe for kids. Well, it’s safe for everybody — cabins are rarely locked. But it’s just minutes away from all the attractions of Door County.”

A few years ago, East Shorewood vacationer John Hess shared memories of some happy times spent at the cottages for an article in Experience Life magazine. “We love seeing stars at night,” Hess said. “But we’re definitely city people, so we’re not into roughing it. East Shorewood evokes a simpler, more leisurely time. The cabins are rustic, but comfortable — a perfect compromise between camping and a hotel.”

The sleeping capacities of the 10 cottages — all named for trees — range from two to eight, and several have additional sleeper sofas. Each has a full kitchen, a bathroom with a shower, and an outdoor charcoal grill. Bed linens can be rented. A land line is available for emergencies.

Nearly two decades into the 21st century, three things that guests have long treasured at East Shorewood remain unchanged: Out in the woods, far from city lights, stars are still visible. The beach is one of the best places in Door County to view glorious sunsets. And in the office, there’s a small freezer with ice cream treats available 24/7 on the honor system, just as it was when young Trudy Erickson, coins in hand, used to ride her bike there long ago.