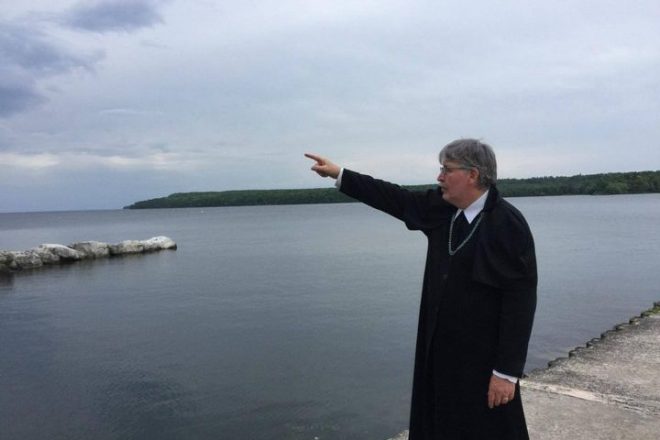 Ed Schriner-Schmitt joined Door County Trolley as tour guide in 2012 and estimates that he’s guided more than 1,000 tours since then. He’s become popular among trolley passengers – especially among those on the Murder and Mayhem Tour and Ghost Tour – for his engaging performances and well-told tales. Submitted.

The wind howls through the trees, causing their trunks to creak and early fall leaves to rustle along the path. That was just the wind, wasn’t it?

With a crowd gathered in front of him, Ed Schriner-Schmitt tells the harrowing tale of the Erie L. Hackley, a steamship that the Fish Creek Transportation Company purchased in 1903 to serve its Green Bay route. That same year, while trying to cross from Menominee, Michigan, to Egg Harbor, a violent storm came over the bay, sweeping passengers and crew overboard and sinking the ship in five minutes. Twelve of the 21 passengers – several of them Fish Creek residents – drowned.

“For the Ghost Tour, this is my favorite story to tell,” Schriner-Schmitt said. “Everything about it is intertwined with so many of the families and the places and the tourism history of the area. It’s a classic story about a horrific shipwreck, but also about the building of the town.”

That story also sets the tone for an evening of spooky tales and eerie local lore.

“There are quite a few stories about [people hearing] voices in the wind and [seeing] faces under the surface of the water,” he added. “It’s just one of those stories that encompasses the area so well.”

This year marks Schriner-Schmitt’s 10th season as a guide for Door County Trolley, which hosts 15 themed trolley tours throughout the season. He leads all of them except one, and he said the Ghost Tour is definitely one of the most popular: Multiple tours run each week from May through Halloween.

The Ghost Tour features 10 stories and seven stops. And although the tour is a family-friendly adventure that’s geared toward all ages, there are definitely stories – and even some sightings – that will make the hairs on the back of your neck stand on end.

For something more bone chilling, book a ride on the Murder and Mayhem Tour: one that Schriner-Schmitt had a hand in researching and writing. It takes participants to (or at least near) the scenes of six real-life crimes – some rather gruesome – that have taken place on the peninsula, including the “Furnace Murder” of 1948 and the “Canal Shack Killing” of 1955.

“It took awhile to find the stories, but the ones we found and included in the tour are quite interesting,” said Schriner-Schmitt, who spent time reading old newspapers, interviewing law-enforcement officers and even talking with some of the family members connected to the stories.

And even though he helped write it, he said it’s the one tour that takes the most time to prepare for each week.

“The Murder [and Mayhem] Tour I have to work at because the facts are the facts, and I need to be at the top of my performance – but I like the challenge,” he said.

That challenge is part of what lures Schriner-Schmitt back, season after season. The tour-guide role is part local historian, part performer – a far cry from his days as a special-education teacher – but he said that’s part of the fun.

“I never thought I could perform like I do now,” he said. “To be able to hand down these stories to the new guides that come on board, and work with them and watch them grow, that’s something I take a lot of pride in.”

The Murder and Mayhem Tour and Ghost Tour will run through Nov. 6. Buy tickets and find out more at doorcountytrolley.com.