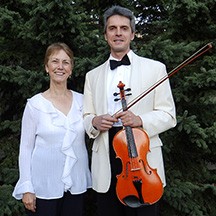 The 2015 February Fest continues on Feb. 21 with Peninsula Music Festival violist Thomas Kluge and pianist Judith Jackson. The concert will take place at Shepherd of the Bay Lutheran Church at 2 pm. General admission seating is $25 with student and children admitted for just $5. A reception with the musicians will follow the concert.

Kluge is the principal violist of the Omaha Symphony, an active chamber music player, recitalist and soloist. Prior to moving to Omaha, Kluge was a freelance musician in New York City. He performed with the New York Philharmonic, orchestras in Connecticut, and a number of chamber orchestras.

Jackson has appeared as piano soloist with orchestras in Chicago, Rochester and Denver, has accompanied numerous instrumental and vocal solo recitals and participated in a wide range of operatic projects across the country.

The program for the concert will include the works of Beethoven, Brahms, Bach and Rebecca Clarke. The first half will feature Kluge on the violin while the second half will be the viola.

General admission seating is available by calling the Festival office at 920.854.4060 and online at musicfestival.com. Seating will be available at the door on the day of the concert also.

The final February Fest concert will be held on Feb. 28.