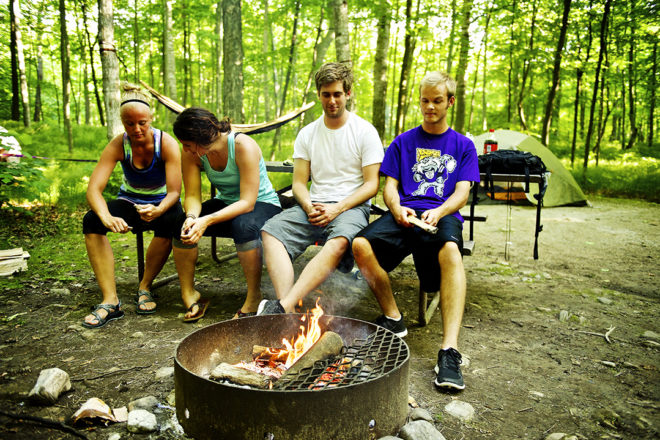 Increasing campsite fees and adding electricity are just a few of the DNR’s recommendations for increasing revenue for the Wisconsin state park system. Photo by Len Villano.

Shortly after Secretary Cathy Stepp rolled out the plans for reorganization, the DNR made recommendations to increase revenue at Wisconsin’s state parks leading into the 2017 budget cycle.

The Walker administration tasked the DNR with finding ways to balance its $1.4 million budget shortfall following the elimination of tax-supported funding in the 2015-17 state budget. The DNR sent options to cover that deficit in a report to the Joint Finance Committee on Dec. 1 and they echo many of the measures proposed in the past.

Perhaps the most controversial of the recommendations is the sale of naming rights at state parks that, “support the department mission centered on the state park brand.”

During preparation of the 2015-17 state budget, the idea of corporate naming rights met with public consternation. While state parks themselves would not be subject to naming rights, facilities within the parks such as campgrounds, nature centers and observation towers could see corporate sponsorship.

Recommendations also include admission and campsite fee increases of up to $10 at six of the most popular parks in the state, including Peninsula State Park. Collectively, the increased fees would bring in a projected $3 million annually. The “demand-based pricing” assumes that attendance will not decrease following an increase in fees.

Other recommendations, in no order of priority, include:

A group of Democrats in the state assembly wrote a letter to Stepp condemning the proposed changes, saying increased fees will make the state parks unaffordable for Wisconsin families.

“Your report also ignores any discussion of the impact of the increased financial burden on access and overall attendance…Do any of the revenue projections provided consider lower attendance?” said Senators Lena Taylor and Jon Erpenbach and Representatives Chris Taylor and Gordon Hintz. “We are concerned that this approach to continually increase fees for Wisconsin families and sell out our parks to private companies is short-sighted and will not be sustainable.”

The Joint Finance Committee will consider the changes before preparation of the 2017-19 state budget.