Feed the Fish, the movie filmed primarily in Door County in the winter of 2009, is coming back to Sturgeon Bay for the New Year.

Director Michael Matzdorff’s independent film will be shown at the Sturgeon Bay Cinema 6 from Dec. 31 – Jan. 6. Not long after that, Door County residents will be able to catch their home on DVD when it’s released on both DVD and Video On Demand on Jan. 25, 2011. 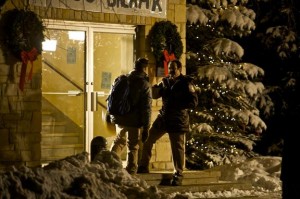 Ross Partridge (back to camera) and Tony Shalhoub perform a scene on the steps of the Sister Bay Village Hall in the winter of 2009.

“We wanted to bring it back to Door County one more time because a lot of people said they missed it or wanted to see it again,” Matzdorff said. “With all the Polar Bear plunge folks coming up we figured that would be a great time to show it.”

The film’s climactic scene features a plunge into the icy waters of Jacksonport on New Year’s Day, an event that will celebrate 25 years Jan. 1.

The film continues to be shown in cinemas across the country, including theaters in San Antonio, Chicago, and Cape Cod. On Dec. 7, the film won Best Picture at the “Best of the Midwest” awards, hosted by the Midwest Independent Film Festival.

“I’m so happy about that,” Matzdorff said. “It’s an audience award, and the audience loved it.”

Matzdorff, who is now working with writers on his next project and doing some writing of his own, said showings of the film have gone especially well in the Midwest. “It did well in Massachusetts as well, where they invited the movie back for a special feature. We’re just trying to keep the film out there now until the DVD comes out.”

Feed the Fish is about a burned-out children’s book author (Ross Partridge) who is brought by a friend to Wisconsin’s north woods to rediscover himself. Once there, he also discovers a girl (Katie Aselton) who also happens to be the daughter of the rough-hewn town sheriff, played by Tony Shalhoub (Wings, Monk). The film’s climactic scene includes a plunge into the icy waters of Jacksonport on New Year’s Day.

Among the other familiar Door County sites in the film are the Viking Grill, Mink River Basin, and the Sister Bay Village Hall. Visit http://www.feedthefishmovie.com to find links to the film’s Amazon sales page and Netflix page.