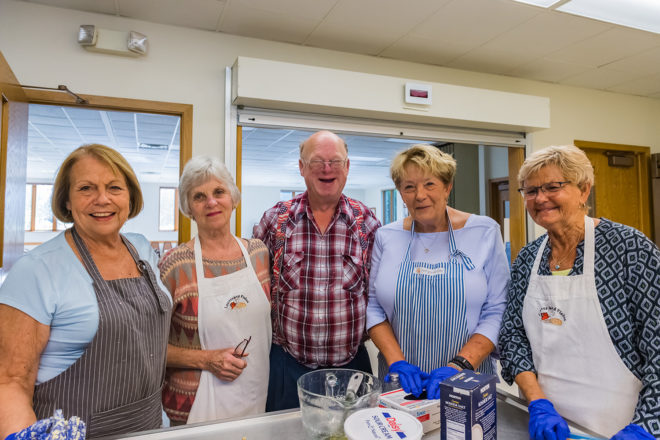 Back in 2006, members of the Ephraim Moravian Church attended one of the Loaves and Fishes dinners, organized by a group of volunteers for those in need in Sturgeon Bay.

“I was on the board of elders at the time,” said Kay Wilson. “After attending the meal, we came back and thought, ‘We can do this in Northern Door.’ We started serving in January of 2007.”

Members of the Ephraim congregation contacted other Northern Door churches, and they came together to offer a free, monthly dinner served from the well-equipped kitchen at St. Rosalia (Stella Maris) Catholic Church in Sister Bay.

After 13 years of service and close to 11,000 meals served, Wilson is ready to step down as the organizer of the dinner that’s prepared and served monthly on the fourth Tuesday.

“I’ve been in charge since the beginning,” she said. “I still want to be involved, but I don’t want to be in charge anymore.” Now the organization is looking for someone to replace Wilson as the person in charge.

Though area churches support the monthly dinner and it’s held in a church, she’s quick to point out that the event is not religious.

“We don’t say prayers; we don’t push religion,” she said. “It’s a free meal for anybody who needs food or company.”

That last statement highlights one of the main differences between the Northern Door and Sturgeon Bay Loaves and Fishes dinners, or most free dinners served in more urban settings that cater mostly to those in financial need. The Northern Door dinner also tends to people who are lonely.

“It isn’t only a hungry need,” Wilson said. “It’s often a social need because we have so many elderly people. We start serving at 5 [pm], and they start showing up at 10 after 4. They will sit and visit. It’s just wonderful to see.”

Just how valuable it is to the people who attend the meals is evident in their donations.

“Financially, this is supposed to be a free meal, but many people make donations. In August, we had $149 in donations, and the meal cost $147, so we made $2,” Wilson said.

In fact, the program has been so valued by the participating churches and their supportive congregations that it has a budget to pay for a program manager.

“We have enough money to hire someone to be in charge, working about 10 hours a month,” Wilson said. “Come December, that’s my last month. If we don’t find someone, I guess it will go by the wayside, which would be unfortunate. I have to think there are so many people up here who could do this.”

Basically, Wilson explained, you take a recipe that serves eight and multiply it by 10.

“I have a whole file of recipes we’ve used over the years and records of how many [we’ve] served,” Wilson said.

She still recalls the first meal she orchestrated in January 2007: meatloaf.

“We had enough for 70. We served eight people,” she said. The leftover meatloaf went into the freezer for the next month. “We served five people the next month,” Wilson said, “but we were persistent; we kept going. We ground up the meatloaf and made spaghetti sauce. We didn’t use all of that, so we used the spaghetti sauce to make lasagna.”

Sometimes the meals are based on what’s on sale where Wilson shops.

“We have charges at Econofoods in Sturgeon Bay and Piggly Wiggly in Sister Bay,” she said.

Pork tenderloin was on sale recently at Econofoods, so that’s what was served that month. In September, a Catholic church donated pulled pork, so Wilson and her volunteers made a large batch of cheesy potatoes to go with it.

Wilson observes the diners’ great appreciation for the monthly meal.

“I have one gentleman who always asks for a takeout because it’s the only good meal he has. We always cook enough to send take-homes with people.”

When the program began, it was a satellite of the Sturgeon Bay Loaves and Fishes program, but Wilson said it eventually stood on its own feet, with all the financials running through the Ephraim Moravian Church.

As the program manager, she spends about 10 hours each month with all the tasks, which include shopping for the meal and organizing her fellow volunteers to help her prepare, cook, serve and clean up the dinner. Anyone who’s interested in the rewarding work of running the Sister Bay Loaves and Fishes program should call Wilson at 920.328.4418.

“There’s got to be somebody out there who would be willing to do it,” Wilson said.