“I just want to help people feel better about themselves,” says Ashley Lusk, with the sincere smile she wears often. The 27-year-old marathon runner, cancer survivor and graduate of the National Personal Training Institute in Phoenix, Ariz., has decided to leave Bay Shore Outfitters after five years to focus on her passion for health and fitness by offering HomeBody Personal Training.

“During the time I was working [for Bay Shore Outfitters] I was also working at the YMCA in Fish Creek,” explains Lusk. “I was teaching Silver Sneakers, an exercise class for older individuals, and a LIVESTRONG class for cancer survivors. I had other clients as well and I noticed in the winter a lot of people couldn’t make it to class or couldn’t show up for appointments because it was too cold or too slippery. I was like, ‘Why don’t I just go to them?’” 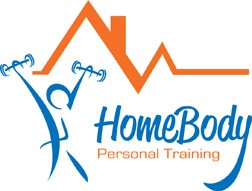 Those who partake in HomeBody Personal Training need to do very little, other than put on some tennis shoes before Lusk arrives. “You don’t have to go anywhere,” says Lusk, adding, “I have all the equipment necessary.” She will “take anybody,” she says – from those who wish to lose weight to those with recent knee or hip replacements to those diagnosed with cancer.

“I have a lot of experience with knee and hip replacement therapy,” explains Lusk. “When I was at [the National Personal Training Institute] we did four hours of class and two hours in the gym. An assignment might be to pretend you are a 300-pound female with a bad knee and rotator cuff program, and you would have to train according to that.”

She can also continue therapy for those after their insurance will no longer cover the costs. “Seems like you get so much physical therapy that’s paid for by your insurance,” she says. “Then insurance is just like, ‘Well, you should be done with therapy now.’ And they drop you. Then people don’t continue the exercises.”

After surviving a battle with oral cancer in 2010, Lusk also offers cancer patients and survivors an empathy and understanding that goes beyond physical symptoms. “I initially started working at the Y for the LIVESTRONG program,” she says. “Having cancer was a wake-up call. It was really scary and I got really lucky, but I wanted to help other people. It gave me more empathy and I wanted to show people the brighter side of having a disease and being positive about it.” 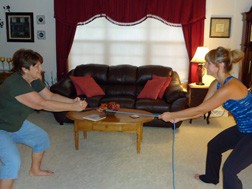 Lusk offers personalized training programs to clients in the comfort of their own homes.

Lusk can help cancer patients and survivors control lymphedema, a common side effect, and their range of motion after surgeries. “After breast cancer, many have scar tissue and don’t have that range of motion anymore. We work on the range of motion with the chest muscles,” she explains.

Lusk also wants to work with those who simply wish to improve their health in the comfort of the home. While living in Arizona she worked for a private studio and did in-home training. “It was really popular,” says Lusk. “Not everybody wants to go to the Y and work out in front of other people, a lot of people don’t feel comfortable doing that.”

Though Lusk always had an interest in health and fitness, she admits to suffering from eating disorders in high school. “I got into personal training because a lot of people in my family struggled with their weight. You see people who are overweight get teased in school and then they feel bad about themselves,” she says. “I hate that. You’ll never hear me laugh at a ‘fat joke’.”

Lusk plans to offer a fun, nonjudgmental atmosphere for clients. Class times can range from 30 minutes to an hour and include a one-on-one regime or two-on-one.

“Nobody likes to feel bad about themselves,” adds Lusk. “I just want to go in there and make everybody happy and healthy and help them in anyway I can.”