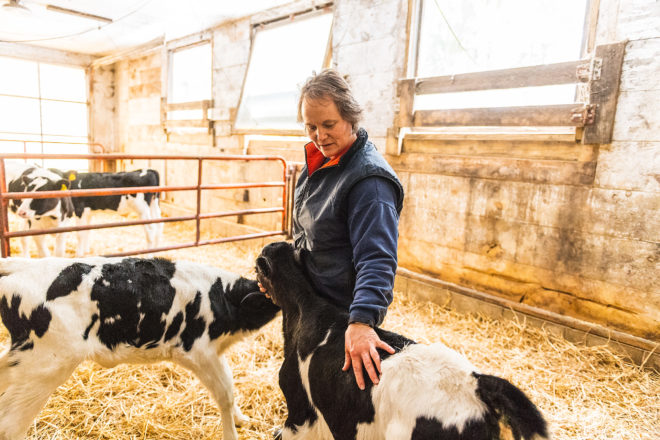 The days of the man working hard on the farm while his wife prepares supper may not be gone, but they may be on the way out. A proliferation of women in the agriculture industry, particularly dominating collegiate agricultural classrooms, is leading a shift in what has traditionally been a male-centric field.

At University of Wisconsin-Platteville, where Tera Montgomery is an associate professor of dairy and animal science, the entire university is 66 percent male.

“But you drill down to animal and dairy science and you suddenly swing to predominantly female,” Montgomery said. Out of a freshman class of 75 students, Montgomery said she might see 10 men.

The same goes for UW-Madison, where Dr. Kent Weigel, chair of the Department of Dairy Science, has seen the same dramatic shift in the past decade.

“We had no female dairy science students until maybe 40 years ago,” Weigel said. “Now it’s about two-thirds, closer to three-quarters… it’s shifting an extra five percent every year.”

Montgomery said the shift in gender ratios is probably due to more women seeing themselves in agriculture.

“I think part of it is that we have more females who feel comfortable in the industry,” Montgomery said. “We’ve done a better job of making sure that women feel empowered to take on the role that were more traditional [for men].”

Another cause of the shift is the increasing number of diverse jobs in agriculture – it is no longer a simple choice between milking cows or driving a tractor.

Sara Griswold is a senior at UW-Madison and president of the Association of Women in Agriculture on the campus. She hopes to start a career in agricultural communication and she cites the increase in exposure to agriculture for the 90 young women in her organization as playing a big role in the gender shift.

“I think it’s really because how women have been brought up,” Griswold said. “Now there’s more opportunity to get involved in 4-H and FFA and there are a lot of mentors along the way making sure they know about different opportunities.”

Montgomery said, despite the shift, traditional gender roles are still evident within the field. She said her heifer and calf rearing classes tap into a nurturing disposition of many young women.

“There’s the more traditional farmers’ wives took care of the calves, there’s still some of that,” Montgomery said. She also cited nutrition and agribusiness as specializations that women are more frequently drawn to than men.

Both Montgomery and Weigel said the gender ratio shift could also be due to fewer men in the department.

For the men that grew up working on a farm, they may seek degrees in the business school or a technical college education to work on farm machinery instead of further education in agricultural sciences.

“If they’re looking at getting into agriculture, they’re not always looking at animal science and they need more skills in more technical areas,” Montgomery said.

But women are getting more involved in farm operation as well. In a survey by the National Young Farmers Coalition of more than 3,500 young farmers, or farmers 40 and below, 60 percent of respondents were female.

Between 1992 and 2012, the number of women working as the primary operator of a farm increased by 92 percent, although most of the farms were relatively small, bringing in around $1,000 in revenue.

But the growing complexity of the farm industry has opened up new avenues for those interested in agriculture and women are increasingly filling those roles.