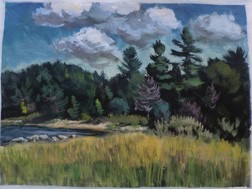 Ferdinand L. Hotz was a jeweler by trade but an artist by choice. He created between the years of 1930 – 1980 and produced a diverse and prolific body of work, focusing on landscapes, water scenes, and the Midwestern lifestyle of Door County and Chicago, Illinois. Many of those works, reminiscent of American life, are similar to works of Edward Hopper and his realistic depictions of rural and urban life. On the other hand, there are uncharacteristic works that present similarities to Vincent van Gogh, particularly van Gogh’s sketches of the human form.

Hotz’s work will be on display at Ephraim’s Hardy Gallery in an exhibit titled “Successful in Business, Extraordinary in Art: The Artistic Legacy of Francis Howe Hardy and Ferdinand L. Hotz” from September 1 – October 9, with an opening reception on August 31 from 5:30 – 7 pm. Hotz did not just see the world through a pair of coke bottle glasses, rather he saw and created works with expression, detail and diverse styles.

In Chicago, Hotz owned a jewelry business and his jewelry designs would allow him the freedom of expression he craved. Hotz did not desire to work in the family business and to escape he would visit Door County on weekends and further explore his creative side. Although his custom-made designs are intricate and exquisite, creating art was his true passion. Judging by the detail in his jewelry sketches, a few of which will be on display, his love for creation and design is obvious.

Hotz often spent his evenings taking night classes at the Chicago Art Institute where he studied oil painting, the figure and portrait, and watercolor. It was at the Institute where Hotz was exposed to casein, a water-soluble medium that is thick-like paste that allowed for more rigidity and dimension than watercolor. His technique thus developed naturally; he was fluid and confident demonstrating his talent and drive to conquer a difficult and sometimes temperamental medium. As a student at the Institute, Hotz would have been aware of what the Masters were accomplishing in Paris and a parallel to the work of Vincent van Gogh can be made. 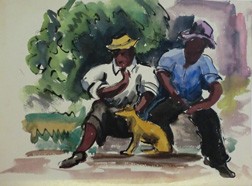 “Street Sketch I” by Ferdinand Hotz.

Hotz’s abundant amount of work depicts numerous locations, different subject matter and they present uncharacteristic techniques. His exploration of the mundane can be seen in his works depicting small towns and rural scenes such as a gas station or houses. Much of his work lends itself to a dark sky and melancholic imagery; often he would create a black canvas using pastel and then create his masterpiece atop of that. This designates an ominous feeling, particularly to his waterscapes. There are very few watercolors in Hotz’s body of work that appear cheerful or sunny. Hotz did not possess a characteristic style and a few of his pieces stick out as abnormalities.

Hotz entered and was accepted into many juried national exhibitions. One of his contemporaries was Edward Hopper, whose work he greatly admired. Hotz’s style is closely related to that of Hopper and of which he once exhibited next to in the Cincinnati National Museum. Both Hopper’s and Hotz’s subject matter can be divided into two primary sources, the first features common American life – street scenes, railroads, gas stations – and the other – seascapes and rural landscapes.

The largest connection between Hotz and Hopper was their use of color to create atmospheres. Hopper focused on the individual in the work and Hotz felt that defining faces would not add to his composition. A unique characteristic of Hotz’s watercolor work is the lack of people and the living; however, continually present through his sketchbooks are character studies.

As can be seen in a few works, Hotz adapted an impressionistic style of painting that is closely related to the famous “Cypress Trees” by Vincent van Gogh. Hotz was aware of the Parisian Impressionists and was interested in their techniques. A sketch, included in the exhibit, using pointillism is among Hotz’s catalogue, which demonstrates his interest in experimentation of style. Hotz did not focus primarily on people or individuals in a setting. However, of the few present, they possess a sketch-like appearance. Again, this is similar to Vincent van Gogh’s human sketches. Hotz was diverse in his creations and his uncharacteristic manner of creating adds to his body of work.

When looking through Hotz’s encompassing body of work, there are a few groupings that stick out as abnormalities. The two in particular are the rough, graphic sketches of people that are similar to van Gogh’s “Potato Pickers.” The explicit style of sketching Hotz used in these works is uncharacteristic of his general style. These works appear rough and quickly accomplished. In these two pieces the men present are not realistic depictions of the human form; rather, Hotz took liberties to create a more expressive work. The warm colors of the clothing on the figures contrast pleasantly with the skin tones of the people and the environment depicted. 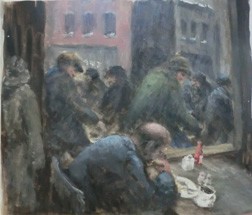 Another instance where Hotz’s exploration in style can be seen is in the works with a café interior and pouring rain. These works are some of the darkest in terms composition from the entire exhibition. The vantage point of the viewer appears to be peering over the shoulder of the café patron accompanying a violent storm outside. The unique perspective, the interior setting and the inclusion of a person close to the foreground of the composition are uncharacteristic of Hotz.

Although whom Hotz influenced may not be known, the Hotz legacy is without doubt present throughout the Door Peninsula. This exhibition reveals an excitement and enthusiasm shared by Hotz and Hardy and will give the public a look behind the legacies for which they are both known. Viewers can see 75 never-before-seen works of art and sketches by Hotz, through his perspective, of the places he loved.