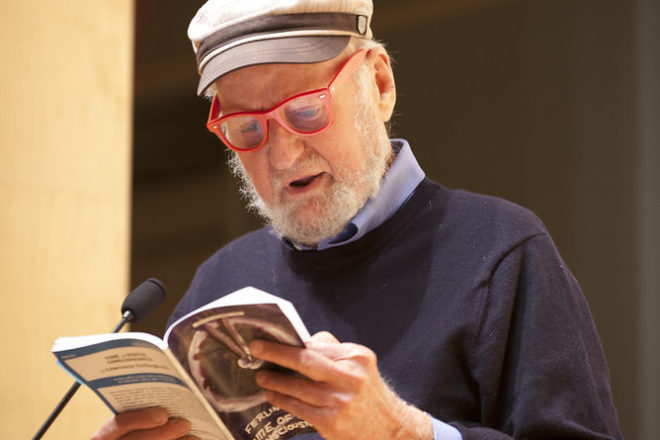 Lawrence Ferlinghetti – known worldwide as a paramount force in the advancement of modern poetry and literature – died Feb. 22, a month shy of his 102nd birthday. Included in the multitudes he inspired was the late, great Door County legend, Norbert Blei. In one of Blei’s last published writings before his own passing in 2013, Norb declared Ferlinghetti to be “America’s only true American poet of conscience, given our time, which is forever his time.”

As a World War II naval officer – days after the first atomic bombing of Nagasaki – Ferlinghetti’s ship was the first vessel to enter Nagasaki’s heavily mined Sasebo Harbor. Six weeks later, after the second atomic bombing of Nagasaki, Ferlinghetti returned to witness the death and destruction that forever shaped his political, social and artistic views.

His iconoclastic leadership emerged in earnest in 1956, when, as the proprietor of City Lights Bookshop and Publishing House in San Francisco, he published Howl by Allen Ginsberg. Initial copies of Howl were impounded by the police, and Ferlinghetti was arrested on obscenity charges. His trial and groundbreaking acquittal established legal precedent for the publication of controversial work.

For the rest of his life, he advocated on behalf of controversial writers. City Lights became a bastion of hope and freedom for international writers whose books were oppressed in their countries. Ferlinghetti’s own books of poetry became international bestsellers and recipients of major awards.

Ferlinghetti embraced his role as the head of America’s foremost independent bookstore, ensuring that City Lights bookshelves were stocked accordingly. He kept watch on what he termed “the real back roads to far places” and the writers he appreciated who lived in those places, including Door County.

On tour for my own first book in 2007, I rejoiced in calling Blei from City Lights to inform Norb that the shelves featured all of his Door County books.

My first book, a Jack Kerouac tribute anthology, featured work by Blei. Norb took me to lunch at Al’s as a sendoff on my book tour. He was thrilled to read the postcard I received from Ferlinghetti directing me to send an initial 25 copies to City Lights with a bill.

Norb maintained that City Lights ordered only five initial copies of my 2008 Door County Blues book because “With an introduction by Norbert Blei” appeared on the cover in much smaller type than “By Robert M. Zoschke.”

Of the similarities that Blei and Ferlinghetti shared, the most striking was that they both garnered notoriety for their writing, but their artistic passion was painting.

When Norb was battling esophageal cancer and having a very difficult time, his partner, Jude Genereaux, and I pondered how to cheer him up. We determined that I would contact City Lights to secure a signed copy of the art book of Ferlinghetti’s paintings, dedicated to Norb.

When I phoned City Lights, a new employee answered and told me that Ferlinghetti had left the store and was headed out of town. With me listening in vain, the new employee began telling his supervisor that “this writer in Wisconsin is trying to get a writer named Blei an autographed Ferlinghetti book …,” at which point the supervisor took the phone and said, “Do you mean Norbert Blei, author of Chronicles of a Rural Journalist in America?”

Yes, I confirmed, explaining the dire circumstances. Via airmail, the book arrived, signed by Ferlinghetti and dedicated to Norb. Norb cherished the book, which is now in his son Chris’s home library.

Regarding Norb’s 2013 point that Ferlinghetti was the “only true American poet of conscience,” I offer a marvelous quote from Ferlinghetti that illuminates what Norb declared:

“I walked through Chinatown recently with a famous academic poet, and he never saw the whole schools of fish gasping on counters, nor heard what they breathed.” — Lawrence Ferlinghetti

Rob Zoschke’s writing desk has been positioned in Sister Bay since 2006.