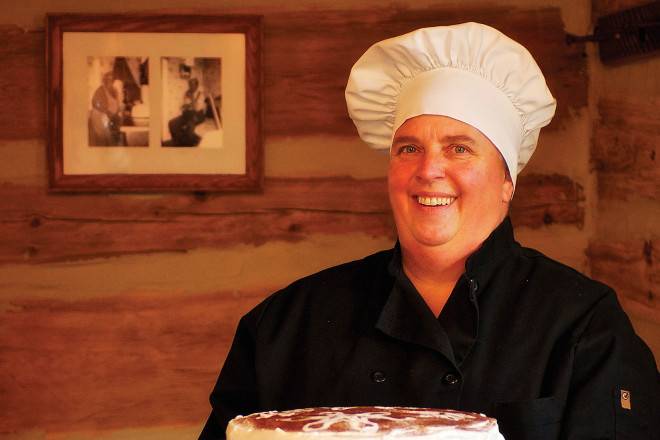 Ann Miller never set out to be the Kraut Lady of Door County.

In fact, she originally wanted to become a plumber in her native Door County as a way to make herself indispensable year round to the smooth flow of life in the place where she grew up, but her father, Carl, talked her out of that career option.

“He said, ‘What are you going to do when you have to carry a bathtub up a flight of stairs?’ I said, ‘I’ll get help.’ And he said, ‘There isn’t always help.’” 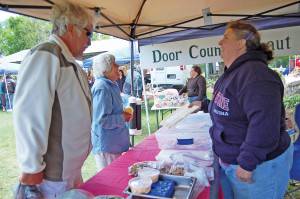 So she thought again of what could remove her from relying on the seasonal service industry and allow her to make a sustainable living in Door County. So she signed up for auto mechanic school in the Milwaukee area and upon graduation returned to open AMA Autocare in 1986, thinking that she could now earn a respectable living despite the season.

But technology and the reality of Door County living conspired to deflate that notion.

“In the old days that was a year-round kind of living,” Miller said, “but cars don’t break like they used to.”

And then there is the large number of Door County snowbirds.

“As so many people migrate out of here in the winter, those of us in the automotive industry go, ‘Hey, where is everybody?’” she said. “A car dribbling in for a brake job or oil change is not going to pay the mortgage, much less the employees.”

This is where her deep Door County roots took hold.

“We’re in a German settlement,” she said over a cup of coffee in the house built in what used to be the second field of her father’s farm on Grove Road.

“The German settlement basically runs from PCI (Premier Concrete, Inc.) all the way to the north county highway shop,” she said. “The original settlers were mostly all cousins that came over from Pomerania, Austria, all those areas, so we’re German-Austrian heritage.

“My dad and my grandma and everybody made kraut when I was a kid. I thought, maybe we should learn to do this before nobody knows,” she said.

So she makes a batch of sauerkraut and, as she says, “starts hauling it to family gatherings,” where she is told, “You should sell this.”

“So we looked into all the regulations of it and went ahead and did that,” Miller said. “It took a couple years of trying, then we got it figured out what we had to do to make big batches. It’s different. You have to watch your moisture content. It works better if you have fresh cabbage, so we grew our own.”

Ten years ago, in 2003, she started selling her sauerkraut at a farmers market held at Corner of the Past at the corner of Highway 57 and Fieldcrest Road. That was the beginning of the Door County Kraut Company. Soon retail outlets such as Main Street Market in Egg Harbor and Piggly Wiggly in Sister Bay were selling Miller’s kraut and people were loving it.

“When people buy the kraut, they’re pretty much hooked on it once they try it,” Miller said.

She knows that’s a fact by some of the reactions she has gotten from customers when she’s out selling at a farmers market.

“There will be people who come screaming in to the Kraut Lady,” she said. “We’ve got really dedicated kraut customers.”

But it wasn’t long before the big question came from customers:  “Is that all you have, kraut?”

So she thought, we’re on a farm. We have an orchard. So she started growing produce to sell at farmers markets along with the kraut.

“Customers kept asking for different types of produce, so we kept tilling up land and irrigating more,” she said.

The produce was selling great, but she started thinking of value-added products.

“Jimmy’s pretty good with the pickle thing,” she said, referring to her husband, Jim Gordon.

So, they thought, instead of just selling pickling cucumbers, what about selling already pickled cukes?

“I always planted a lot of cucumbers because we’ve got wholesale orders for them. So I thought, okay, let’s see what the pickles do. We made 24 bags and thought that should be enough. We sold them in the first day,” Miller says with a hearty laugh.

“We still have people who want the little pickling cucumbers, but we think a lot of our cucumbers are going to be going to our ow 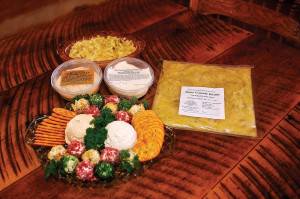 Making use of whatever resources are at hand, when a friend of Gordon’s caught a load of whitefish, Gordon smoked them and Miller came up with the idea of a smoked whitefish dip. She hauled that to family parties and again heard the familiar refrain, “You should sell that.”

“So I researched that,” Miller said, and what she found might have stopped a less determined person.

“Any time you deal with hazardous food products that can spoil and people can fall over dead with, then there’s a whole lot more requirements. So we did what we had to do to meet those requirements,” she said. “Our coolers are monitored 24 hours a day, and they have to stay between certain temperatures. You have to have approved food sources. We use Charlie Voight’s smoked fish (from Charlie’s Smokehouse in Gills Rock). I bone it all and process it and make the dip.”

About eight years ago, Miller added the title of innkeeper to her résumé after converting an old family property to a seasonal rental unit called Gustave’s Getaway.

“The cabin’s working pretty good,” she said. “That was my dad’s grandpa’s place. They built when they came here from Prussia. It’s all hand-built. We restored it in 2005–2006 and rent it out to tourists. So we’ve got the auto shop. It’s not always a stable revenue, but it’s there. And we’ve got the cabin.”

And then there’s the food thing. Up until a couple of years ago, Miller was using the kitchen at Florian II Lakeshore Rib and Steakhouse in Baileys Harbor.

“I’ve worked for Florian, the Kwaterski boys, since 1972, either full- or part-time,” Miller said. “I still work there Sundays, cooking or doing whatever they need me to do.”

But as her food business grew, she was spending more time on her stuff in Florian’s kitchen than on theirs.

“We were getting to where we were using Florian’s place a lot and were thinking, this isn’t fair,” she said. “So two years ago we put the commercial kitchen in what used to be our two-car personal garage.”

Now with her own commercial kitchen, Miller’s mind started thinking of other value-added products she could turn out.

“The type of licensing I have allows me to do a lot of things,” she said. “It opens a whole new set of doors. It’s creative. Instead of putting it on a canvas, put it on a plate and eat it.”

Miller developed a love of baking from her paternal grandmother.

“My grandma was a baker at the Ephraim Hotel,” she said. “She told stories of baking millions of pies. Everybody got pie for dessert. Everything was made right there. You’d go over to grandma’s house on a given Saturday, she’d be baking a pie, a cake, cookies for the week, bread. My mom had to keep up with grandma, you know, mother-in-law. She learned to bake. I got dragged into it. Ok, we’re making bread. I’d have my own dough to knead. Baby tough crusts is what we had. We had our own little rolling pins. We’d roll that thing to death. It kept you busy. It kept you amused, and you learned to cook and bake and stuff.”

As Miller was thinking what food to add to her growing list of products and something that no one else was doing, she thought of baking.

“It would be cool if we could make cakes and crisps,” she said, “so this past winter we worked on Danish and kringles. We test-drove the byproducts on neighbors; show up on the door with bakery. Tell us what you like or don’t like about it. They were all good about being brutally honest, and that’s fine. So we got something we think would work and that wouldn’t fit anybody else’s niche. We make it from scratch. Yup, we’ve got a niche. I didn’t realize how many people like kringles.”

People like kringles so much, Miller has found, that she’s thinking they might help the business through the lean winter months. What she knows for certain is that Door County Kraut Co. will help sustain her.

“At least we have something,” she said. “We can be really old and still roll dough out. It’s something you can keep doing as long as you have the produce.

People who live up here don’t ever seem to be able to retire. So you gotta have something to do to make a living, something you can do while you’re kind of retired.”

Making kraut, she said, is all about “getting to know your cabbage and what you have to do to your cabbage to get what you want.”

“We pack our kraut raw out of the barrels. We vacuum pack it and freeze it because we don’t put any preservatives in it. It’s just salt and cabbage,” she said. 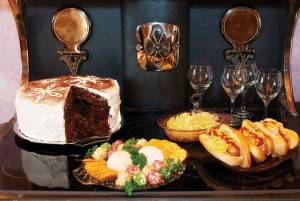 Up until last year, Miller made one kind of kraut from green cabbage.

“The people started asking for red kraut,” she said. “Last year was the first year we planted red cabbages. I put in about 100. They grow really slowly. Everybody thought the red cabbage was really good. It’s sweeter, more of a wine-type flavor when it ferments because of the sugar content. It’s also a much stiffer product, so it holds its shape.”

Don’t be surprised if Door County Kraut Co. takes on an Asian flair in the future with kimchi, the spicy Korean form of kraut made with Napa cabbage.

“I haven’t ever had it. I’ve read about it,” Miller said. “People have asked us about it. I might want to experiment.”