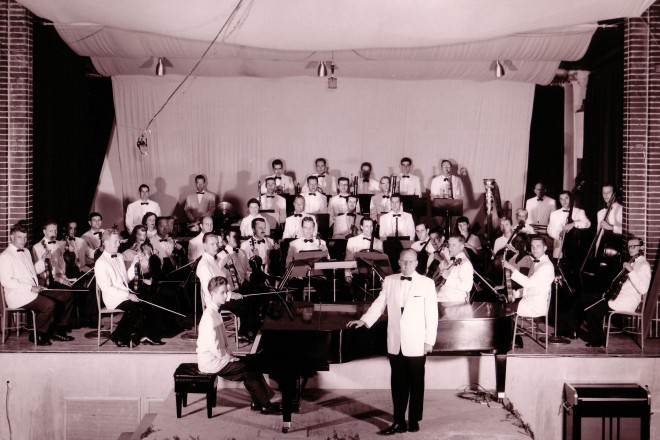 The concert hall was ready, the audience was taking their seats and history was about to be made. In a few minutes the downbeat from Maestro Thor Johnson would commence the first concert of the new Peninsula Music Festival, initiating a tradition that would endure for the next 50 years and beyond. Outside the hall, if a few concert-goers were still arriving, they may have noticed how enchanting it all looked. Cedar trees lined the lighted pathway of wooden bridges that crossed over what seemed to be rushing streams below.

This was the scene August 6, 1953, the night that inaugurated the music festival. But there was more going on than met the eye.

There were butterflies in many stomachs, for instance. The ambitious project that was unfolding was the result of an intense year of preparations. Thousands of dollars had been raised and 40 professional musicians had been engaged. In some ways that was the least of it; the past year of preparations had been preceded by many years of dreams and wishful thinking and kitchen table meetings on the part of a determined few. How well it would succeed was an open question, but so many high hopes were riding on it.

And then there was the little matter of the “concert hall” by day. It was the high school gym, and although the acoustics were considered “remarkably fine,” the year the festival was launched coincided with the remodeling of Gibraltar High School. In fact, with the exception of the gym, the entire building had been razed and the “concert hall” stood alone in the midst of the wreckage and the construction site. Then in July torrential rains turned the deep excavations around the building into flowing rivers.

The above scene was described in the festival’s 25th anniversary program book by Kay Wilson, chairman of the Peninsula Music Festival Executive Committee. The school’s massive construction project was unknown to the festival committee until after most of the committee’s preparations were complete. Meetings were hastily called to discuss the dilemma, and Wilson wrote:  “The debate began between the pessimists and the optimists. In all fairness, the pessimists had much solid ground in their reasoning,” adding that the optimists, of course, prevailed and the festival went forward. Aided by a sympathetic contractor who built bridges from the parking lot and the delivery of cedar trees from a nursery, “the day time nightmare” was transformed when the sun went down.

When consulted, Dr. Thor Johnson had been most reassuring about the orchestra’s ability to adapt to the sorry state of the surroundings; if he had any private doubts, they went unexpressed. Johnson was, at that time, the young conductor of the Cincinnati Symphony Orchestra and, as his biographer Louis Nicholas makes clear, Johnson craved the success of this new festival as much as anyone.

The conductor had been led to Door County by Ephraim summer resident Lorenz Heise through a series of coincidences. Heise and Johnson shared a common heritage of the Moravian faith and both were the sons of Moravian ministers, which made it easy for them when they met to form a lasting bond of friendship. Both were interested in a newly discovered lode of Moravian music that had been written in America in colonial times. Johnson’s interest took the form of a professional commitment to serving as the music director of a weeklong festival for performance of this music in June 1950. Heise’s daughter, Hedy, remembers her father reading about the planned festival in the Milwaukee Journal and deciding instantly, “We’re going!” Heise, who sang in choruses and churches in both Milwaukee and Ephraim, and his wife Ellamae traveled to Bethlehem, Pennsylvania to attend every concert of the Moravian festival. They were so impressed by what they saw and heard that they approached the conductor – their new friend – and tentatively invited him to consider Door County as the location of a future festival. Johnson’s response was warm and encouraging. “You get it started,” he suggested.

A wider Door County audience first learned about Thor Johnson following a community sing one Sunday evening in July 1950. Heise told the Ephraim residents and visitors who had gathered about the festival, the superb concerts, and the outstanding conductor from Ohio who had produced them. Perhaps he would be interested in doing something similar in Door County, Heise reported. Some meetings followed, letters were exchanged, and plans for a music festival began – but at a snail’s pace, until August 1952 when the conductor came to see Door County for himself.

Johnson stayed at the Liberty Park Lodge in Sister Bay, and the first meeting between the conductor and a handful of Door County’s serious music lovers took place “on the front porch of that venerable institution,” according to a festival founder, George Norton. A second meeting followed, he wrote in the 40th anniversary music festival program, with the “same group of people on the porch of Kay and Carl Wilson’s home” in Ephraim.

A businessman, Norton had once used his veteran’s benefits from World War II to take voice lessons at a conservatory in Chicago. He was typical of the residents and summer visitors who founded the music festival. Businessmen, retired doctors, wives, and mothers – they were not musicians themselves although several had been classically trained pianists or vocalists – all had a particular appreciation for those who pursued music as a profession and great interest in what Thor Johnson might have to tell them.

According to Johnson’s biographer, a larger group gathered at the Ephraim home of Dr. Arthur and Helen Byfield to hear Johnson explain his vision for a music festival. He had specific ideas in mind for the Door County project. It should feature the music of contemporary composers, he said, and it should both regularly commission new works to promote the composing of new music and should include other seldom heard works from what he called “the rich repertoire available for the small, chamber orchestra.” If $10,000 could be raised in time for a concert series the following summer, he would assemble a small symphony – no more than 40 musicians, an ideal size, he said, for the work he had outlined.

There was some uncertainty among the 20 or so interested supporters who heard that last message; some hesitancy about raising that amount of money. But not much. By the end of 1952 the money was in hand, and the hiring of the musicians started in earnest.

From the very beginning the musicians recruited to play in the music festival orchestra have been among the best in the country, and are?selected for their ability to be soloists as well as orchestra leaders. Marilyn McDonald, who has served as the festival orchestra’s co-concertmaster since 1991, noted that Johnson was able to recruit his fellow musicians from the nation’s top orchestras. His good friend John Krell (their association went back to graduate school at the University of Michigan School of Music) played flute and solo piccolo in the Philadelphia Orchestra for 30 years; Robert Marcellus was the principal clarinet chair with the Cleveland Orchestra for 20 years. Both Krell and Marcellus remained associated with the music festival in various roles – soloist, guest conductor, board member – through much of its history.

Composer and horn player Verne Reynolds came to the Peninsula Music Festival orchestra with Johnson from the Cincinnati Symphony, then taught horn at Eastman School of Music for 36 years. Kenneth Byler, another friend from the University of Michigan, led the Lawrence University Symphony and played for the music festival for 24 years. Also outstanding, McDonald said, were the festival orchestra’s original co-concertmasters Isidore Cohen, who went on to be a member of the renowned Beaux Arts Trio, and Raymond Gniewek who became concertmaster of the Metropolitan Opera orchestra.

In addition to the musical virtuosity of the festival musicians, what is immediately obvious is the great loyalty that has developed among the musicians themselves and between the musicians and Door County. Even today, the orchestra members arrive each August talking about their year long anticipation of the festival and the “family feeling” attached to it. Remarkably, three of the members of the current orchestra have been with it since the days of Thor Johnson. Both McDonald and violist Sally Didrickson were students of Johnson when they were just teenagers. Didrickson, who teaches, writes for Chamber Music Journal and performs regularly with many Chicago area chamber groups, began playing with the music festival in 1968. McDonald, professor of violin at Oberlin College and a member of resident chamber music groups at the Smithsonian, first played for the music festival in 1963 and has returned every year since 1971. Timpanist William Wiggins started playing for the festival in 1970. He is also the timpanist for the Nashville Symphony and a member of the Blair Chamber Players at the Blair School of Music at Vanderbilt University where he is also an associate professor.

As much as the music festival is a superb musical success story, it is also a story of community pride and success. The festival founders quickly united in support of their new leader, then went out to multiply that support throughout the county.

As the music festival prospered, two names became synonymous with it – Thor Johnson, of course, and Kay Wilson. No performance production can take place without an army of staff behind the scenes smoothing the way, and Wilson quickly stepped into the role of “chief of staff.” More than ready for the challenge, she had a master’s degree in music from Northwestern University and had taught music in public schools in Minnesota and Illinois for 10 years before she married Carl T. Wilson of Door County and Milwaukee. As a wife and mother, she seemed to find opportunities to apply her musical vocation wherever she went. In Milwaukee she could be found conducting the Junior Arions Choral Club or the Roundy Memorial Baptist Church children’s choir or lending her time to some project for the Wisconsin Federation of Music Clubs.

She did not shoulder the innumerable duties of running the music festival alone. Every issue of the music festival program makes it abundantly clear that a legion of loyal helpers, advisers, and “worker-bees” assisted her each season. But it was Wilson who accepted the responsibility of organizing the entire endeavor year after year for more than three decades. Her music festival co-founder, Norton, wrote in a 1992 reminiscence of the founding moment:  “So…the Peninsula Music Festival was on its way…As we continued to marvel, Kay’s infectious smile and unstifled enthusiasm would carry us forward from that day…”

Kay Wilson had been a part time resident of Door County most of her life – first with her parents, then with her husband and children. She was able to function as a mirror image of Johnson. He brought the vision, musical talent, knowledge and his connections to the music world to the Peninsula Music Festival. She brought the optimism and her own connections to Door County to raise the money and the audiences, as well as the organizational skills to ensure the smooth outcome of every little detail.

When Thor Johnson died unexpectedly in January 1975, it was a blow that many thought would sink the music festival. It had been so much of Johnson’s own making. It was his genius, perhaps, to create something that was so uniquely his own, but also strong enough to go on without him, forging its own identity.

The Thor Johnson chapter of the Peninsula Music Festival is only the beginning of the story.