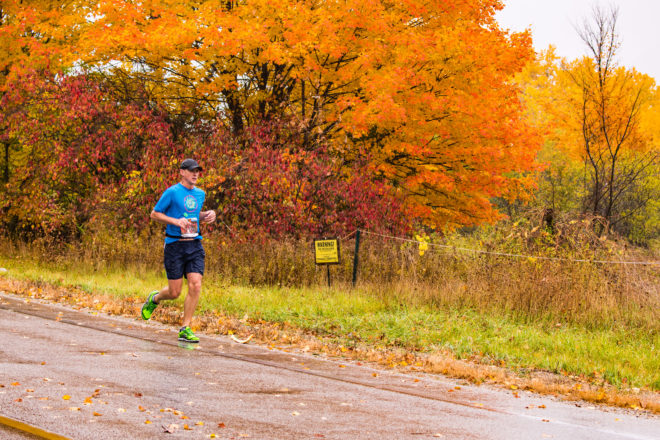 I was nervous. I have run a marathon. I’ve biked halfway across the country. But running 50 miles was something that I struggled to wrap my head around.

The night before the Fall 50, my mom and I sat at the kitchen table with a map and a menu, trying to figure out at what mile markers she would pass me banana smoothies, peanut butter sandwiches, hot applesauce and most importantly, coffee.

But no matter how much time we spent preparing, in the back of my mind I knew that trying to prepare for your first ultra-marathon is futile. I would be flying by the seat of my running shorts. 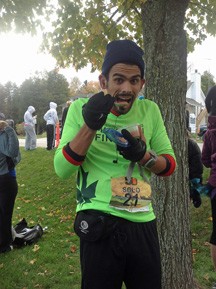 As with any race, I had trouble sleeping the night before and by the time I was truly awake, we were lining up at Shoreline Restaurant in Gills Rock for our 7 o’clock start time. Although the weather had threatened a dreary race day, the peninsula’s unpredictable nature fell in our favor and my nerves soothed a little bit seeing that we had a tailwind at our backs to start the day.

I have done several multi-day cycling tours and the thing I learned is that when it comes to events like this, there is no time and there is no speed. You simply accept that you are going to be moving yourself forward all day without stopping. To unhook from goal times and a competitive spirit is liberating and it becomes a process of getting from point A to point B rather than chasing a clock that is 50 miles down the road.

I clicked on Pearl Jam’s new album as the starting horn went off between spectators’ cheers and the wind from the north. I settled in to a pace I felt was sustainable and found myself in a small group of people who must have felt similar. The one tip I picked up on ultra-running is that if you feel like you’re running slowly, you’re probably running too fast. I was not about to abuse that.

There were two things that running 50 miles did to my perspective on running. The first occurred in the first mile. At the second turn, the small pack I was running with came upon the base of a short but steep incline. We had been running for less than five minutes and the coffee induced adrenaline was still flowing. But instead of powering up the hill, many runners slowed to a brisk walk and worked their way to the top.

I realized that while there were people there to race, the majority of solo runners saw this as an individual challenge. Since my leap into endurance sports, I have been a competitive racer gunning for the podium from start to finish. Here, I had to leave my ego at Gills Rock and watch as other runner’s sped past at a pace I could easily sustain in a shorter distance.

I forced my mind to abandon the competition for the slow-moving process and it would be my first time leaving my ego at the door for a race. Again, very liberating.

The rising sun illuminated the aging leaves that mark the primary draw to the county in these months and light conversation was kept between runners as we clicked off the miles south. Passing cars cycled between cheerful relay-team vehicles in their green painted windows and other visitors simply trying to find a late breakfast in Sister Bay.

It was somewhere in Peninsula State Park that I entered the pain cave. The “pain cave” is a metaphorical (but very real) place where runners go when doubts and darkness make their way to the forefront of the mind. It makes each mundane step feel smaller and questions of why you would ever sign yourself up for something like this bounce alongside you on the road.

I went in the pain cave at mile 22 and came out in Fish Creek at mile 24 with some hot applesauce and a bit of coffee. I had prepared myself for this to happen throughout the day, and while getting out of the pain cave was hard, knowing that I would go back in later that day was even harder.

Besides walking through the aid stations, I ran straight through mile 36 before employing a traditional walk/run combination. At each mile marker I walked for about a minute and then ran the rest of the mile. While it made the next few miles rhythmic, it also made transitioning from walking to running harder and I found myself counting the steps until my next walking spurt.

It was around this time I came to my second new perspective on running.

Contrary to everything I have known about running, it began to hurt more while walking than running. Perhaps this was due to less time putting weight on each foot and perhaps it was due to late-race delirium taking hold. Throughout my career in endurance sports, I have always understood that going slower is easier and much less painful. Now this conception was turned upside down and I reasoned that if I run, I’ll finish faster than if I walk and thus the pain won’t last as long. 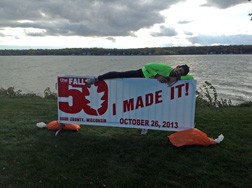 I ran the last 10 miles straight through and I can hardly remember a thing about them. I did find out that miles 40 through 45 were my fastest of the day, averaging 8:30-minute miles. But my mind was too focused on the pounding of each foot on the pavement to engrain these memories and I crossed the finish line nine hours after leaving Gills Rock with a medal around my neck and my first ultra-marathon under my belt.

There is a beautiful lack of appreciation for ultra-marathons and I think that is what the draw to the sport is. Any distance longer than a marathon is too big for most people to conceive and therefore it just gets put away as something a select few crazy people do.

But for those who run, there is an underlying community that understands and respects the abnormalities and excess, which is why I can lie next to an older man on the finish line massage table discussing our next ultra-marathon endeavors. But not until after my post-race beer, of course.