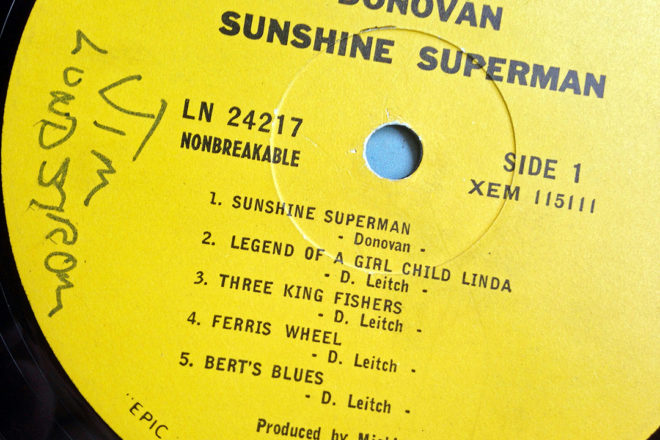 I learned too late about Donovan’s 50th anniversary Sunshine Superman tour, and his two early June appearances in Wisconsin. In lieu of seeing the great Donovan live, I pulled out my copy of the Sunshine Superman album, the same copy I have owned since I was 15 (the year I moved on from buying 45 rpm singles to full albums).

There are moments of such bright, shining clarity on that record that I will never tire of listening to it. “Sunshine came in my window so softly today…” and we’re off. It’ll blow your little mind!

That got me thinking about the other records I have brought along on the ride since my teen years. I can distinguish my first album purchases because back then I would sign my name to one side of the paper label on the actual disc, for fear, I guess, that it might get lost in someone else’s collection. Thankfully, that habit didn’t last long.

But at least it allows me to find those earliest purchases.

Black Sabbath, Black Sabbath (1970): I had never heard of this band when I ordered via mail through the handy Columbia Record club that I had joined through a Sunday newspaper advertisement. But, as a horror fan, the cover image and, of course, the name, attracted my attention. The music was everything the name promised. I have a couple of their other early records, but this is the only one that stands the test of time.

Brewer & Shipley, Tarkio (1970): A perfect document of the time, with the hit “One Toke Over the Road.” These guys ended up on Nixon’s blacklist for that song and others on this record, such as “Oh Mommy (I Ain’t No Commie).” Still a highly recommended record.

J.J. Cale, Naturally (1972): I already owned the Eric Clapton single “After Midnight” (1970), and did not know it was written by an Oklahoman by the name of J.J. Cale until I bought this record because I liked the gentle album cover. It remains a classic recording of Cale’s understated style.

Jethro Tull, Thick As a Brick (1972): Loved it then and still love this record, which came with a 12-page newspaper, The St. Cleve Chronicle, which, when combined with Ian Anderson’s songs, were meant to satirize the progressive rock concept albums of the time. Anderson cited Monty Python as an influence. What 16-year-old could resist?

Leon Russell, Carney (1972): I don’t recall what attracted me to this record. Leon looks sober and scary on the cover. No song titles listed. But it’s a great album of roots rock and psychedelia. George Benson later had a hit with Leon’s beautiful “My Masquerade” from this record.

“Spider” John Koerner and Willie Murphy, Running, Jumping, Standing Still (1969): Here’s another one that I don’t recall specifically what led me to it, other than the fact that the two fellows on the cover looked like people I knew. Turns out both are Minnesotans. This moved me at 16 and moves me to this day. Just good old, raw, raucous rock ‘n’ roll from a couple of gold old Minnesota boys who ended up on a national label (Elektra).

Spirit, Twelve Dreams of Dr. Sardonicus (1970): It’s hard to describe those times to someone who was not there. There was no mistaking the fun house mirror meaning of the cover of this record. The title also appealed to me because as a horror fan, I was aware of but had not yet seen a 1961 horror film called Mr. Sardonicus, so I thought there might be a connection. I find it as fun and beautiful an aural journey today as it was during those heady days of orange sunshine and strawberry barrels.

Neil Young, Neil Young and After the Gold Rush (1969, 1970): I ordered both of these through the Columbia Record club, without having any prior knowledge of Neil Young. His lonely, tortured voice spoke directly to my teenage angst and cemented my desire to write.

Woodstock: Music from the Original Soundtrack and More (1970): I will never forget the first time I played this record in my basement room. When I put on side two, which begins with Country Joe McDonald’s “Fish” cheer (you remember the Fish cheer: “Give me an F…”), my mom yelled down the stairs, “Sounds like Hitler!” I have to admit that even though I still own my original copy of the six-sided Woodstock album, I rarely listen to it. But I will never forget one particular night while listening to side five and the medley by Sly and the Family Stone, by the time they got to “I Want to Take You Higher,” well, they did just what they said they would. It was the most exciting moment of recorded music I had ever heard.