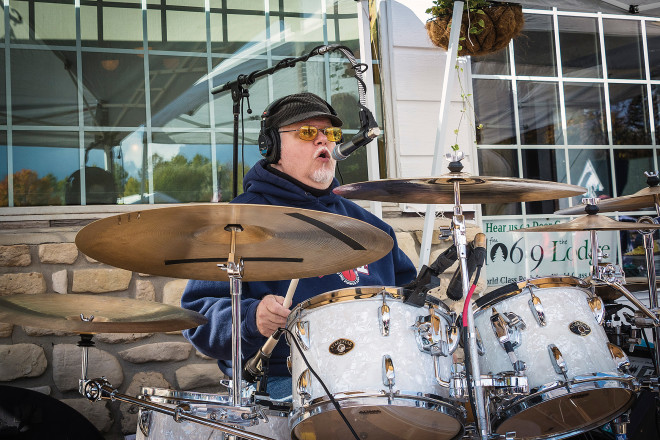 Back in Mansfield, Ohio, 13-year-old Pat Judy was sitting at home when a man in the neighborhood stopped by, hat in hand, and asked the boy’s mom if he could sub for their sick drummer at the local Liederkranz Hall. The neighbor knew Pat played drums in school. Because he promised to chaperone the boy, Mother said yes. 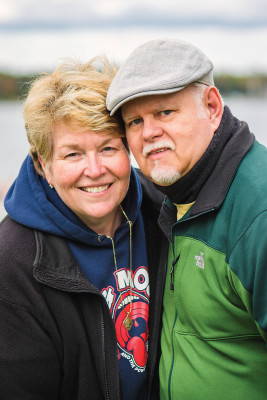 Young Pat returned home late that evening with $17.50 in his pocket and a grin from his first beer buzz. Pat Judy was now a professional drummer, launching a career currently celebrating its 50th anniversary.

Judy’s father had been a frustrated musician, and would absent-mindedly “beat time on my butt when they got me up for a feeding,” Judy said. “My mother claimed that’s how I got my sense of rhythm!”

When Judy was four, he was given the gift of his first set of brushes and began drumming in earnest.

“I’ve been here 27 years,” Judy said of his musicmaking in Door County, “almost half of my life. I consider this home.”

After Judy’s mother married Duncan Thorp, they retired to Door County. She was interested in the history of Fish Creek and active in the development of the Noble House museum. Visits to her brought Judy to Door County on vacations, and in 1987, he met Paul Sowinski at what was then Powell’s Country Inn restaurant in Fish Creek on the bend in the highway across from Gibraltar Area Schools.

Judy sat in as a drummer for the Off-Center Jazz Band. “Paul offered me a job,” he recalled. “I did a Sunset Cruise, and the following season my wife and I decided to move up here.”

The music scene in Ohio had been decaying rapidly, he said, and he knew he could find day work in Door County to supplement his music jobs.

His gigs since have taken him up one side of the peninsula and down the other. “I wish I knew everyone by name that I know by sight,” he said. “I must know thousands of people through the band.

“Sometimes a guy will come up,” Judy continued, “and say, ‘You played at our wedding 15 years ago!’ and I’ll say, ‘How’s it going?’ and he’ll say, ‘Ah, we’re divorced now!’” Judy laughed, “We actually played for one guy three different times!”

While Judy has performed with many bands, he is most often associated with Big Mouth, a group that has enjoyed continued popularity in Door County. Ironically, the foursome began as a one-night party gig on Saint Patrick’s Day in 1991 at the Nautical Inn in Sturgeon Bay, with Jay Whitney on guitar, Paul Sowinski on bass, Woody Mankowski on saxes and flute, and, of course, Judy on drums; all four sing.

“Something clicked,” Judy recalled. “The chemistry was right and the Original Big Mouth Quartet was off and running.” He remembers the rehearsals that followed, some in Whitney’s driveway and some in Sowinski’s yard, and the performing that first year, sometimes seven nights a week.

The band developed a style, he said, that incorporated jazz, blues, rhythm and blues, and classic rock. Their repertoire included original tunes by Whitney and Mankowski.

Big Mouth appeared in various configurations over time as members were added and subtracted, five pieces with Marc Jimos, eight pieces with the complement of the Power Tool Horns, and sometimes as a trio. But the Big Mouth name has persisted.

“Jay had a Big Mouth band in Detroit,” Judy explained, and the name carried over, “the band morphing out of what was the Amnesians in Door County with Jay, Paul, John Redmann and me.” (Judy’s artist/musician brother Mike Judy played guitar with that group before Whitney joined.)

However, Judy had a musical life long before Big Mouth. After his early debut at the Liederkranz in Ohio, his band instructor Percy Hall gave him private lessons and took him on dance jobs during his junior and senior years of high school. At the same time, Judy was part of the Jamie Davis Trio, a popular high school group. He also joined his brother Mike in The Revolutions, his first exposure to rock music.

After high school, Judy played baritone bugle in the Ohio National Guard. At the end of his enlistment, he returned to Mansfield and played in Mark III for 10 years, followed by nine years on the road with Smile and Quest, performing in 32 states as well as the island of St. Thomas.

During his years in Ohio, he also played in pit bands for headliners such as Bobby Vinton, Mitzi Gaynor, Bill Cosby and The Lettermen.

And 1987 brought him to Door County, where he has played for American Folklore Theatre, pit bands for Peninsula Players, and the 18-piece Swing Time Big Band from Appleton.

In 2007 Judy reconnected with his high school friend Davis from the Jamie Davis Trio on a Norwegian Lines Jazz Cruise, “where I played and jammed with the greats of jazz,” he said.

But for the most part Judy’s musical career in Door County was uninterrupted, other than a brief move to Florida in 2000. His late wife had been ill and wanted to spend time with her parents, who lived in that state. When she passed away, and he made calls back to Door County, people asked when he was coming home. “It was my home!” he said.

In Florida Judy had found few music gigs, but worked a day job at a car dealership. When he told his boss that he was driving back to Wisconsin, would arrive on a Thursday and have a job playing music by Saturday, the man laughed and challenged him: “I’ll bet you $100 you don’t!”

Judy’s confidence that he’d have both a day job and a music gig was well founded; he called his old Florida boss from Door County telling him the good news of his employment. His boss good-naturedly chuckled at losing the bet. “The check is in the mail!” he said.

Now, after 50 years in the business, Pat Judy remains a musical fixture in Door County. “As long as God sees fit to keep my body strong enough to do it,” he said, “if I can still motivate the band and keep people happy, I will do it.

“People ask me when I’m going to stop. I tell them that when the hassle of loading the van, setting up, doing the job, tearing down, loading the van and driving home outweighs the sheer joy of playing with my friends, then I’ll quit and let the youngsters take over.”

But for now, “I’m just living the dream. I’m with a wonderful woman. We’re just enjoying life, very happy to be in such a beautiful place. I can’t see myself wanting to live anywhere else!”

“I remember the time we played at Summerfest, and it started to rain. We were all wireless except Pat, so we continued to play. Everyone else in the park had shut down, and as it started raining harder, the tent began to leak. We threw a big tarp over Pat, and while he continued to play, we left the stage and started jumping in puddles while we played. It was the strangest thing, to look up on the stage, hear all this music, and see nothing but a big blue tarp!”

“I hired Pat in 1987 to come up from Indiana to play in the house band at Powell’s Country Inn. He’s a very competent drummer who can play a wide range of musical styles: jazz, rock, bluegrass, ballads, and he’s also a gifted singer.”

“He’s very generous! Back in the early ’90s with Big Mouth, he and his late wife Sue would let me stay at his house in Sturgeon Bay countless times after late night gigs in Fish Creek and Egg Harbor. We’d arrive at his place around 3:00 am, svtay awake and watch Blazing Saddles (his favorite movie) until the sun came up, and laugh at ourselves for doing it. I’ve never laughed as hard as I do with Pat. We’re like brothers. We’ve fought, played and laughed together for more than 20 years, and in truth, there are more stories that I cannot tell than ones that I can!”