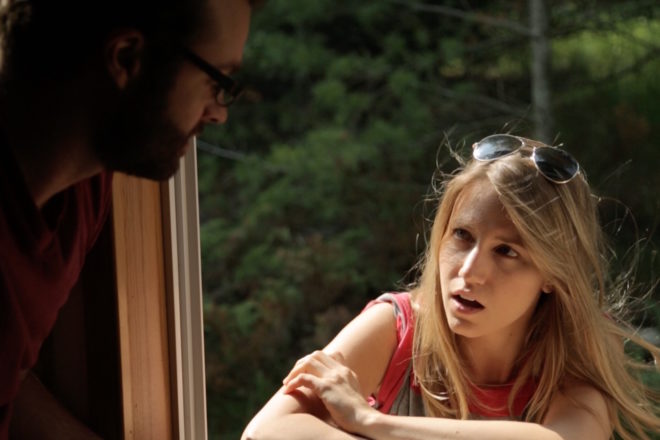 Scene from ‘June Falling Down.’ Submitted.

After 15 film festivals and numerous awards (including Best American Independent Feature at Sonoma International Film Festival), Door County-made June Falling Down, a full-length feature film, is now available on iTunes for rental and purchase. DVDs are also available on the film’s website, junefallingdown.com.

The movie centers on a young woman, June, returning home to Door County for her best friend Harley’s wedding, who she just might be in love with. The wedding coincides with the one-year anniversary of her father’s death, and her grief over his loss only makes her feelings for Harley more complicated.

June Falling Down is written and directed by Rebecca Weaver and is produced by Chris Irwin. It stars a number of locally known actors and musicians, including Nick Hoover, Claire Morkin, Justin Pahnturat, Evan Board, Joanna Becker, Elliot Goettelman and Steven Koehler as well as performances by Big Mouth and Katie Dahl with Rich Higdon.

The film showcases Door County’s beauty in the summer, including Whitefish Dunes and Kangaroo Lake as well as a number of local businesses.

For more information on the film and to purchase DVDs, visit JuneFallingDown.com or the social media accounts for the movie (@junefallingdown on Facebook, Instagram, and Twitter).