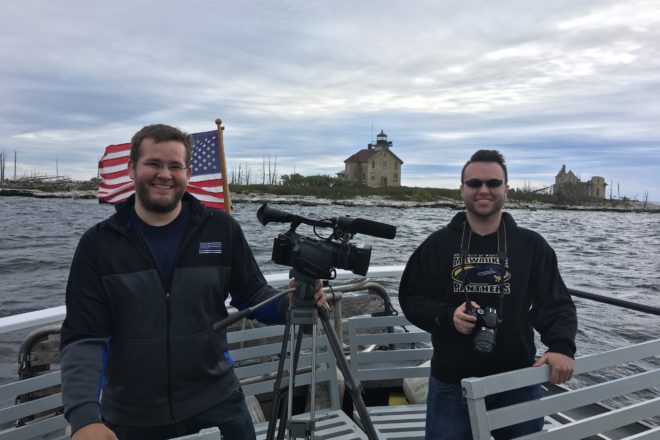 Jake Heffernan and Isaac Buhle on the stern of the Shoreline Charters’ boat after filming at Pilot Island. Submitted.

Kewaunee filmmaker Jake Heffernan hopes his upcoming documentary film about each of Door County’s 11 lighthouses will not only bring awareness to the regional treasures, but help in preserving them as well. Slated for a spring 2019 release, the profits of Lighting the Door will go toward the organizations that work to preserve and restore the historic maritime structures.

“These lighthouses helped pave the way to make Door County what it is today,” Heffernan said. “It is a massive tourist destination and without shipping it never would have become that way.”

The amatuer filmmaker got his start in both film and the maritime industry during stints aboard the 1,000-foot Stewart J. Cort. He toured the Great Lakes filming his experience with a clunky standard definition camera. Now armed with quality production equipment, he hopes to marry those two interests and feature the icons of Door County.

“We hit a period after the lights were automated where people didn’t really care about them too much and it shows in a lot of these lighthouses,” Heffernan said.

Many of the lighthouses in Door County were automated in the early to mid-1900s. With no one visiting or stationed at the sights, they fell out of sight and out of mind. Only in the past few decades have groups undertaken serious efforts to restore these structures.

“We’re trying to bring them back and appreciate where they came from,” Heffernan said. 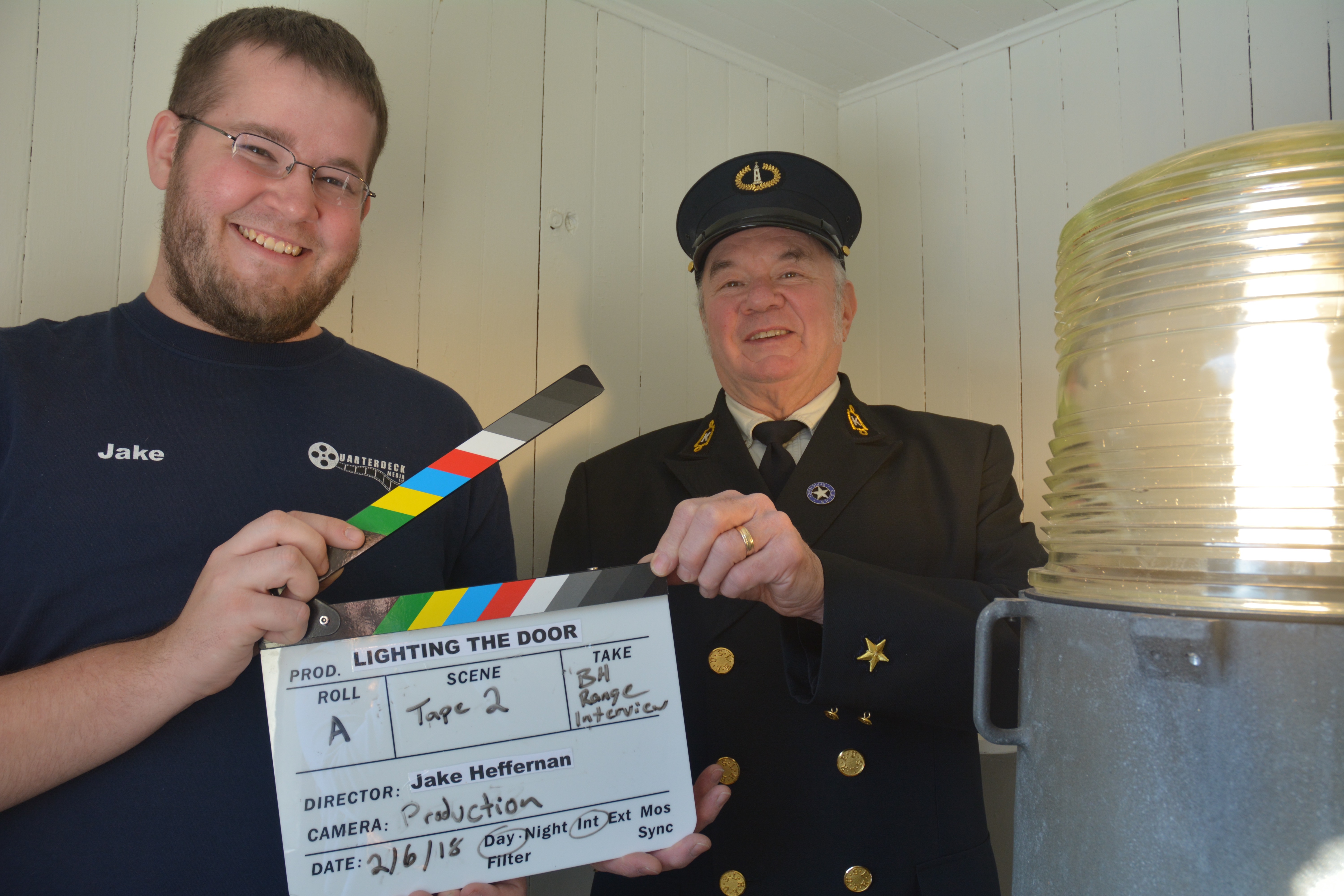 Jake Heffernan interviews Ed Miller inside the lantern room of the Baileys Harbor Range Lights. Miller leads tours and reenacts the lives of lighthouse keepers at the range lights. Submitted.

Production is well underway on the film and it includes many never-before-seen aspects of local lighthouses. Heffernan will take viewers into the shuttered Plum Island structures, wearing hazmat suits to protect them from years of bat infestation and decay. The film also features close-up views of the abandoned Baileys Harbor Birdcage, now privately owned.

“I took a trip up to Cana Island to play with my new drone and I put that video together,” Heffernan said of the early stages of the film. He thought, “Why don’t we make a full film based on these lighthouses and just take this little three minutes of Cana Island and extend it to all these lighthouses? Before I knew it we were planning shoots up to Plum Island.”

Heffernan said he was most proud to land longtime Green Bay news anchor Tom Zalaski as the narrator for the film.
“Getting someone like Tom, who is so recognizable in this area, that means a lot to me,” Heffernan said.

Local businesses donating their time and resources, such as Jim Robinson of Shoreline Cruises in Gills Rock, have also made Heffernan’s production run more smoothly.

“I’m really trying to bring the community into this as much as I can because these lighthouses are a part of that community,” Heffernan said.

The film will be in production throughout the summer and fall. Heffernan hopes to release the film to DVD for sale with local preservation organizations and the Door County Maritime Museum in the spring of 2019. For more information on the film or sponsorship opportunities, visit quarterdeckmedia.com.