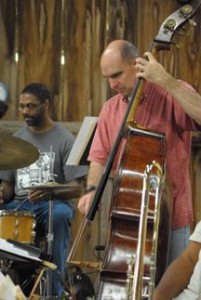 Dennis Mackrel, drums, rehearses with Jeff Campbell, bass, and the Birch Creek Academy Band. Dennis, Jeff and the Academy Band can be seen performing at Birch Creek through August 14.

Birch Creek is in its fourth week of big band jazz concerts, performing “The Great American Big Band” on August 13 and “The Legacy of the Big Band” on August 14. On August 14, Birch Creek faculty and students will end the season after having completed more than 50 concerts since June 24, both on their Egg Harbor campus and throughout the Door County community.

The public is invited to hear the sounds of Birch Creek for themselves. General admission is $29 for adults, $10 for students, and $6 for children.

The box office outside the concert barn opens at 7 pm on concert nights, with pre-concert music in the campus gazebo at 7:30 p.m. A picnic grove with tables is available for carry-in picnics. For more information, visit http://www.birchcreek.org.