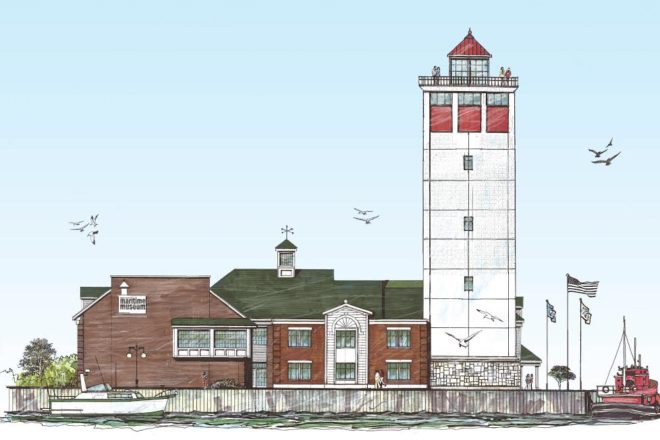 A rendering of the proposed maritime tower at Door County Maritime Museum. Submitted.

The Door County Maritime Museum will break ground on a new lighthouse replica tower in April of 2017. The plan, developed over the last 10 years, is in its final phase of fundraising to reach the approximate $2.4 million goal. That final phase shifts the focus from big donors to local support for the expansion of the museum.

“Trying to tell more of the lighthouse story, we don’t have a lot of footprint here on the water space,” said Amy Paul, executive director of the museum, adding that the museum ran out of exhibit space just a few years after opening the current building in 1997. “This was a neat representation of the lighthouses, plus then to be able to get something that’s space-conserving. We can’t go out, the only way to do it is to go up for us.”

The 10-story tower will include an enclosed observation deck on the tenth floor with a staircase leading up one more level to an outdoor observation deck. The remaining floors will each house a different exhibit on the county’s maritime history and education about the Great Lakes. Themes for each floor include Great Lakes geography, islands of Door County and fishing. The project will also include expansion of the first and second floors of the museum for conference space and a new retail store.

“We really know that there’s a link missing between our maritime history and education,” said Paul. “Not only do we want our locals to appreciate and grow from it, but the visitors as well. You’ve got 150 years of maritime history here from when the majority of people started coming and people don’t know anything about it.”

After 10 years of throwing around ideas, the museum began taking a harder look at the maritime tower to tandem with the City of Sturgeon Bay’s plans for the redevelopment of the west side waterfront. Paul said that the expansion was as much about sustainability of the museum as it was providing for the Sturgeon Bay community.

“It’s something else that we believe, from a tourist aspect, will help people remember Door County,” said Paul. “What do people love? They love the view. They love lighthouses. You’re getting more people to eat, sleep, and drink here in the community too.”

After kicking off fundraising with big donors, many from the maritime industry and Great Lakes region, the museum will now refocus its fundraising effort locally. Paul said that building the appreciation for the maritime history that is so prevalent in Door County is what will bridge that final gap in fundraising.

“Everybody has got their love,” said Paul. “You have to go and have that conversation with people that you know are your big supporters. The maritime people, we’ve got more than 800 members and they’ve already shown us that they have a love for maritime. We don’t just say this benefits us because it doesn’t just benefit us. It benefits our neighbors.”

The final fundraising effort will allow the museum to complete construction of the tower, but fundraising will continue for the exhibits inhabiting each of the tower floors.

“As we start building, that’s where we hope to get people excited about the different floors. We’re working with some outside firms to help us do content and creation and design,” said Paul.