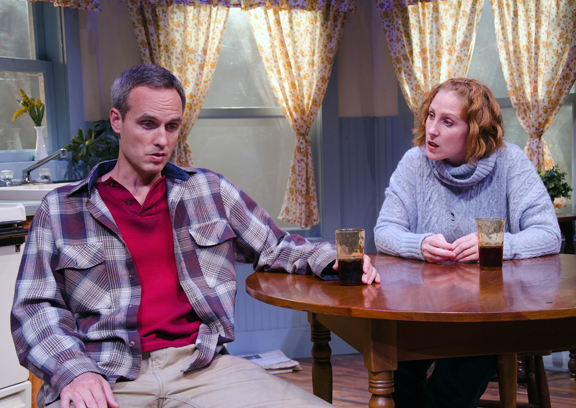 From left is Jay Whittaker and Maggie Kettering as Anthony and Rosemary in the Peninsula Players Theatre production of John Patrick Shanley’s Tony Award-nominated love story, “Outside Mullingar,” on stage through Sept. 6. Shanley pays tribute to his Irish heritage in this quirky love story set in the farming community just outside Mullingar, Ireland.

Peninsula Players Theatre ends their run of Outside Mullingar on Sept. 6.

Outside Mullingar is set in rural Ireland and features Anthony and Rosemary, 40-ish next-door neighbors and homebodies. Rosemary has been smitten with Anthony since childhood and he is oblivious to the fact. When Anthony’s father threatens to disinherit him, Rosemary steps in to save the farm and her dream of lasting romance.

“Outside Mullingar was on Broadway last year and I got a copy as soon as I could,” said Greg Vinkler, the Players Artistic Director. “When I finished reading the last word, I put it down and knew I wanted to put it into this season. It is poetic, wistful, uplifting and funny.”

The Peninsula Players perform on Friday and Saturday at 8 pm, and Sunday, Sept. 6 at 4 pm. For tickets or more information, call 920.868.3287 or visit peninsulaplayers.com.