Thirty-two skateboards will speckle the landscape of the new Sister Bay Skatepark at its grand opening June 11, but these skateboards serve a purpose beyond grinding.

In an effort to raise additional funds for the skate park in Sister Bay, fundraisers Ron and Lisa MacDonald distributed the skateboards to local artists and skaters to use as canvasses. Following the Skatepark’s grand opening, the skateboards will be on display at local businesses until they’re auctioned off in Art for the Skatepark fundraiser at MarinaFest. 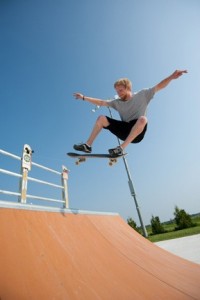 Jeff Chitek hits an ollie to a fakie on the quarter pipe at the Sister Bay Skatepark.

Four weeks ago, however, a set of quarter pipes, bank ramps, grind ramps, stairs and grind rails came to life with skaters after the first phase of the Sister Bay Skatepark was finally opened.

Efforts to build the skate park started in 2004, but were stalled due to a land dispute with the Town of Liberty Grove in 2005. By the time that issue was put to bed in 2007, many of the original skate park supporters had lost interest or moved on to other projects. Lisa MacDonald restarted the effort in early 2010, much to the delight of young skaters.

Gibraltar High School Junior Sam Kersebet said the skate park is more than just a place to skate, but also a place where students can pass time and meet new people.

“I think right now it’s perfect for Sister Bay,” he said. “It’s become a place where people can hang out on gloomy days and gives them something to do.”

Gibraltar seventh grader Connor MacDonald said he got involved to make the skate park a more special place for himself and others. He said skaters from Sturgeon Bay and Southern Door have driven to Sister Bay to use the skate park, even on weekdays.

While they’re happy with the current status of the skate park, already skaters are talking about future improvements.

Kersebet said the equipment at the skate park satisfies the skateboarders who just wanted a place other than the beach to practice, but they’re excited about any additions coming in Phase II.

“Quality-wise, I’m just glad they got something,” he said. “[The skate park] is a great thing to get started and the interest it has sparked is ridiculous.”

Connor MacDonald hopes to see another ramp in Phase II, but he said as long as it keeps growing, the skate park would remain a meeting place for local skaters.

“I just hope we keep adding to it cause it’s a great thing right now,” he said.

The skate park sits on the large concrete slab where the ice rink is in winter, which means the equipment will have to be moved before winter arrives.

The Village of Sister Bay has set aside land for a permanent skate park, Ron MacDonald said, but the money to pour a concrete slab still needs to be raised.

After years of false starts, it was time to get something started simply to give the skaters somewhere to skate, Ron MacDonald said.

Through Art for the SkatePark and the Build-A-Ramp program, the MacDonalds hope to continue adding to the park.

The MacDonalds took over fundraising efforts 18 months ago primarily because they saw a need for kids who were skateboarding by the Sister Bay beach. In addition to raising funds, Lisa MacDonald said she tried to raise awareness about skateboarding in the community.

Lisa MacDonald said the sport has more followers on the peninsula than might be expected. She added that the skate park would also benefit tourists whose children skateboard, giving them a place to shred when on vacation.

And if the numbers make any kind of statement, Lisa MacDonald said anywhere from 15-20 people use the skate park on a daily basis.

Encouragement from the Sister Bay Village Board helped push the project forward she said, as well as positive support from the community.

“It’s a safe place for them to hone their skills,” she said. “It’s amazing what they can do.”

The skate park equipment cost $15,000, with half the funds coming form the Sister Bay Skatepark group and the village matching the group’s contribution.