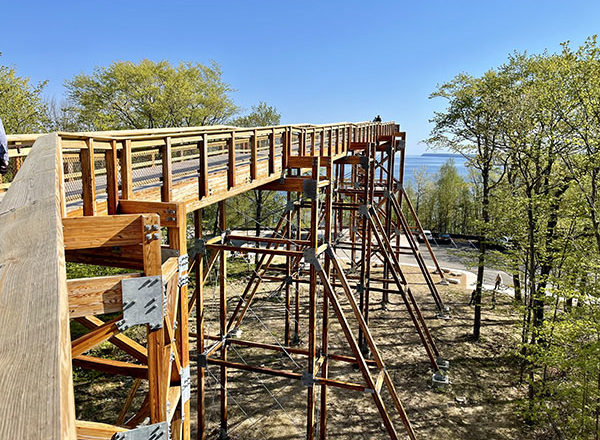 The ramp to the top of the new Eagle Tower emerges from the tree canopy. Photo by Myles Dannhausen Jr.

After six years, $3.7 million, and multiple setbacks and delays, the members of the Friends of Peninsula State Park’s (FOPSP) board of directors took their first steps up the new ramp to Eagle Tower with little fanfare Tuesday morning.

For them, that was just fine.

“Let’s do it,” President Chris Holicek said, and with that the board began the trek up the new 850-foot ramp through the tree canopy and up to the top of the tower. They were joined by Eric Hyde, Peninsula State Park Superintendent, and Mike Bergum, Northeast Region Supervisor for the Department of Natural Resources.

The DNR closed the tower abruptly in May of 2015 due to structural and safety concerns. After an unsuccessful fight to save the tower it was deconstructed in September of 2016, leaving a hole at the top of Eagle Bluff, and in the hearts of generations of park visitors. But the FOPSP quickly turned eyes to the future, launching a fundraising campaign to raise $750,000 to rebuild the tower. That was the first estimate for the cost of reconstruction.

But the DNR determined that if a new tower was going to be built it had to comply with the Americans with Disabilities Act, calling for a new design that would provide equal access to all individuals. That sent designs in a drastically different direction, and costs skyrocketing.

Several members of the board are senior citizens and climbed the ramp with no issues, admiring the canopy, views, and sturdy construction of the ramp. But they also contemplated what the experience will be like for those with disabilities and mobility challenges.

“I’m trying to imagine pushing a wheelchair,” Holicek said. The ramp includes 16 flat resting points for those making their way up, as well as several cutouts in the railing to allow young children or those in wheelchairs to take in the view unobstructed by the railing.

Of course, the ramp isn’t the only way to the top of the 60-foot tower. Visitors can still climb the old-fashioned way, up the 95 steps of the interior staircase.

Those who never knew the old Eagle Tower will be awed. Those with memories of the past will undoubtedly play the comparison game. In that matchup there will be differences. The old tower was 15 feet taller, climbing above the top of the tree canopy and offering views inland to the east and south the new tower does not. As a result, the panorama isn’t quite as expansive, but for most that fact will soon be forgotten. The canopy walk offers a new, peaceful experience that is unique not just to Door County.

“This is a big thing for the whole state,” said Hyde, who joined the park last fall. “To see people with a stroller or wheelchair at the bottom of the tower who couldn’t get to the top before who will now have that chance is really going to be special.”

Work is not entirely finished on the tower. Originally slated to open April 30, it was delayed for further inspection and final touches – checking bolts, sanding rough edges, and completing ADA installations. A new kiosk welcoming visitors with information about the tower will be installed at the base, and interpretive signage will be added at points on the ramp.

That signage will remind people of the long journey to build the third version of Eagle Tower (the first was built in 1914, the second in 1932), and what makes the park special. But the heart of the experience still comes at the top, one that requires no interpretation.