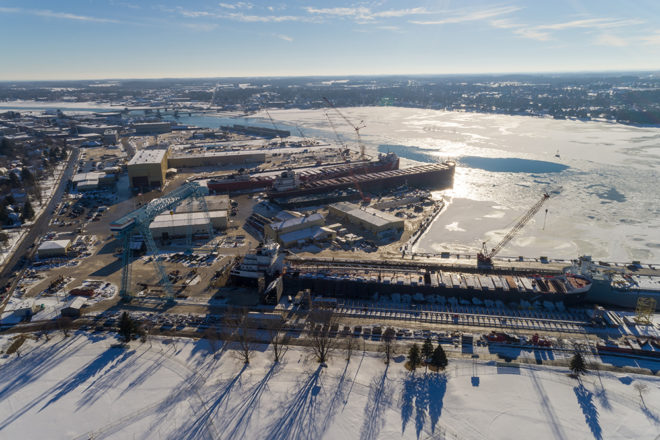 The expansion that Fincantieri Bay Shipbuilding (FBS) intends for its waterfront campus has triggered a flurry of Sturgeon Bay committee meetings during the past month as the company gains permissions and approvals for various aspects of its building plans.

One of those requests requires a public hearing before the Common Council – to take place Nov. 3 – to receive public feedback about changes that would allow FBS to proceed with its construction plans. Those include a new, 84,000-square-foot building that’s 110 feet tall on the southern end of the 605 N. 3rd Ave. campus, and a 68,000-square-foot addition to an existing building off the dead end of North 1st Avenue.

The event that triggered the FBS expansion was the $795 million contract that was awarded to Fincantieri Marinette Marine in April to build a U.S. Navy guided-missile frigate. The contract includes options for nine additional ships and services valued at $5.5 billion.

FBS’s plans didn’t align with existing city codes that cap building heights at 45 feet and require a 20-foot side-yard setback within the industrial districts. In August, FBS secured permission to proceed when the Sturgeon Bay Zoning Board of Appeals (ZBA) granted the company variances that allowed it to encroach on setbacks and exceed the maximum height.

The ZBA is a quasi-judicial committee authorized by state statutes. Its decisions can be contested in court by aggrieved parties within 30 days. Neighbors of the shipyard who will live and work within the shadow of the new, 110-foot building – Kelly Catarozoli, who owns the Foxglove Inn; and Hans Christian, owner of Studio 330 – sought to overturn the ZBA’s decisions by filing an appeal in Door County Circuit Court in late September. They allege in their complaint that the ZBA’s decisions were arbitrary, oppressive and unreasonable, and that their ability to conduct their businesses and live healthy lives would be severely affected by excessive noise levels, pollution and a significant degradation of views. According to Wisconsin statutes, the filing of the complaint would stay – or put on hold – the decision the ZBA made to grant the FBS variances.

“We feel confident the ZBA had reasons to approve the variances, but when you go to court, you never know,” said Marty Olejniczak, Sturgeon Bay community development director. “At a minimum, it would delay things. So Bay Ship sent us notice of that and asked us to amend the codes.”

If the city amended its codes to reflect the ZBA’s decisions, “it would avoid delays and still allow the intent of the ZBA to be upheld,” wrote Todd Thayse, FBS vice president and general manager, in a letter requesting the changes to city codes.

On Oct. 6, the Sturgeon Bay Plan Commission recommended the requested amendments, which mirrored the ZBA’s decisions. The changes would mean that any buildings within the city’s industrial districts could be up to 120 feet tall as long as those buildings were at least 300 feet from a residentially zoned property. Additionally, buildings that already encroached on the 20-foot side-yard setback would be allowed to expand using that existing side-yard setback line without needing a variance. The code changes would not only accommodate the city’s largest employer but also any other company within the industrial districts.

“It fits their [FBS] needs, but I think it’s an overstatement to say it’s just for Bay Ship,” Olejniczak said.

During the council’s Oct. 20 meeting, Mayor David Ward summarized the changes as a practical move. He said the city had a history of granting height variances – “We counted six or seven different variances, a lot to Palmer Johnson,” he said – which was a sure sign the city should fix its rules.

“This issue has been before us with respect to the granary, the Maritime Museum,” Ward said. “They all come as separate actions.”

The 120 feet would cover the city’s tallest building, which is currently the Maritime Museum’s 118-foot tower.

Alderperson Helen Bacon said she appreciated the mayor’s practical explanation of the text amendments in the face of what she called an emotional process.

“A lot of us have been hit with a lot of emotion,” she said.

Though the council may consider it a practical move, Catarozoli and Christian disagree that the city can amend its rules to dodge their lawsuit.

Though Christian said he believes they would prevail in court, the bigger issue right now for them is the city’s attempt to shortchange the legal process and their rights under Wisconsin statutes.

“We are concerned about having due process,” Christian said.

Catarozoli refers to herself and her neighbors as “collateral damage.” She and Christian and other of their neighbors have consistently expressed their concerns during community comment periods at the numerous meetings that have dealt with the FBS improvements. Noise, open sandblasting, traffic and careless snow dumping are their primary complaints. They believe those problems are never addressed and will therefore be compounded following the shipyard’s expansion.

“We’re just handing over these height variances and zoning text amendments without any concern about us and our neighbors,” Catarozoli told the council Oct. 20. “If we continue to let one company basically write the rules, and nobody says ‘no’ to them, who is safe? We have never said ‘no.’ If you say ‘no,’ I guarantee they have a plan B.”

FBS has repeatedly assured the city that the new work will take place inside and that the design of its new buildings will dampen noise. Thayse said during the Plan Commission’s Oct. 6 meeting that if the company didn’t get the height and setback variances, it would have to look outside Sturgeon Bay for a site to manufacture the frigate.

Christian purchased his building in 2008 because he said it served his purposes. At that time, the now-shuttered My Sister’s Cafe and Red Oak Winery were open across the street from him.

“It was cool,” he said. “And I wanted to live in a harbor district.”

But it’s not cool anymore, Christian said, with the shipyard’s expansion slowly eating away at any semblance of a buffer between its operations and his neighborhood. But Christian is not giving up on trying to find solutions. One of the conditions upon which the ZBA variances were granted was that FBS must work with the city on a beautification plan for 3rd Avenue. Christian researched buffer zones created at other shipyards around the country, then drew up a preliminary plan that he went over with FBS management and city officials.

The plan is a starting point, he said, for an issue that he believes is gathering more momentum within the neighborhood.

“The benefit of the struggle right now is our neighborhood is waking up to the fact that we are long neglected and abused, frankly,” he said.