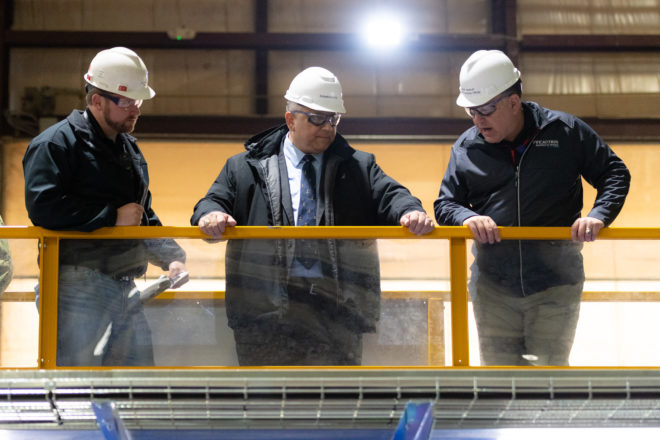 The near-term outlook and long-term possibilities appeared brighter than a short-term bottom line in an 85-page, half-year report released by the Italy-based firm that has a shipyard in Door County.

The Fincantieri Group reported a loss of “euro 234 million” ($241 million) in its report pertaining to activities Jan. 1 – June 30, 2022. However, the report – released July 29 under “Investor Relations” and “Financial Statements” at fincantieri.com – pointed to a brighter second half of 2022.

A U.S.-based spokesperson noted that Fincantieri is a multi-billion-dollar international firm and said the company has many new orders for cruise ships, plus a memorandum of understanding for constructing an ultra-luxury cruise vessel and ongoing military contracts. Those military contracts yield some revenue during construction and more revenue upon completion and delivery.

Also, Fincantieri is a leader in the development of energy efficiency for ships, and U.S. operations can eventually benefit from those innovations for vessels in Europe, where clean-energy measures are mandatory.

The report pointed to an “easing of persistent concerns” from a 2020-21 downturn in the global leisure-cruise industry, and it more than once named Marinette Marine and Sturgeon Bay-based Fincantieri Bay Shipbuilding as key assets for the company.

“The first six months of 2022 were characterized by macroeconomic and political uncertainty induced by the continuing impact of the spread of the COVID-19 virus and the emergence of the Russian-Ukrainian conflict,” an introductory statement read. “This situation has an impact on the one hand of expectations of a recovery in cruise activity and on the other hand has fueled strong inflationary pressures (notably in the prices of raw materials, including energy, natural gas and steel) and the emergence of difficulties in the supply chain.”

The half-year report noted that the company’s significant expenditures included major upgrades at certain shipyards, investments in safety and energy savings at shipyards in the U.S. and worldwide, and the “continuation of the important investment program in the U.S. sites of Marinette Marine and Bay Shipbuilding shared with the U.S. Navy to increase their efficiency in order to develop the order backlog resulting from the Constellation program.”

Fincantieri has expectations of rising revenue stemming from an increase in the number of ships delivered during the second half of 2022, including cruise vessels.

“Orders in the first six months of 2022, orders worth euro 691 million, were acquired mainly related to the construction by the U.S. subsidiary of Fincantieri Marinette Marine of the third missile-launching frigate as part of the Constellation program and additional work on cruise vessels already in the order book,” according to the report.

Fincantieri also recorded a loss relating to an owner missing the pickup of a completed ship during the first half of the year.