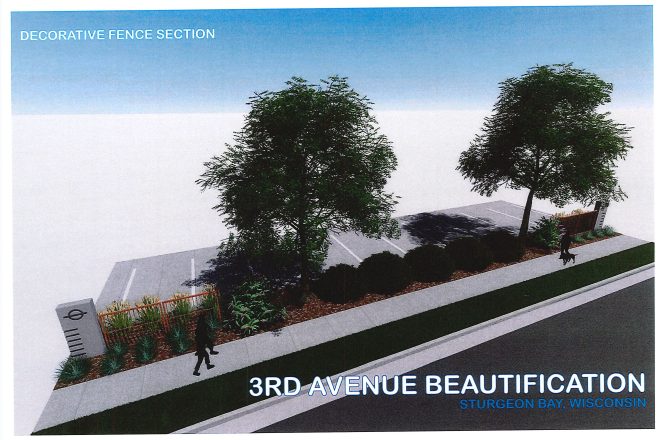 This image shows the decorative fence sections and landscaping that will be repeated along the length of the beautification area. There will be nine canopy trees total. Source: City of Sturgeon Bay.

By next summer, Fincantieri Bay Shipbuilding’s yard along 3rd Avenue, from Jefferson to Iowa streets, will be enhanced with greenery, canopy trees, fencing and an interpretive area for maritime history.

On Sept. 15, the shipbuilder presented its conceptual beautification plan to the Sturgeon Bay Plan Commission, which accepted it unanimously.

Improving the property’s aesthetics was a condition of the shipbuilder receiving a height variance last year for its new, 84,000-square-foot, 110-foot-tall building on the southern end of the 605 N. 3rd Ave. campus, as well as a setback variance for a 68,000-square-foot addition to an existing building.

That recently completed, $26 million capital expansion plan anticipated the $795 million contract awarded in April 2020 to Fincantieri Marinette Marine to build a first-in-class guided-missile frigate alongside its Wisconsin sister shipyards, ACE Marine in Green Bay and Bay Shipbuilding. In Sturgeon Bay, the tasks include constructing large portions of the hull, then barging them across Lake Michigan to Marinette.

The beautification-plan requirement was sealed in an agreement between the city and Fincantieri in January 2021. The shipbuilder then hired planning, engineering and design firm Graef, which conducted two public hearings and a survey during the spring and summer. The feedback called for an attractive corridor from downtown Sturgeon Bay to Sunset Park with view corridors into the waterfront shipyard and noise blocking and buffering for the residential neighborhood without cold-looking fencing or barriers.

“We tried to honor much of what we heard over the last several months,” said Bay Shipbuilding’s Tom Martin.

Improvements are limited to the shipyard side of the street in the schematic-level design that includes a public gathering space outside the train-depot building for an interpretive space about maritime history, according to Graef senior planner Larry Witzling.

The greenery has been extended back five feet from the existing sidewalk. For roughly 300 feet in length, and nine feet deep toward the parking lot, there will be nine canopy trees and a combination of lower plants, flowering trees and evergreens.

The curb cuts and entrance at Iowa Street provide “some of the better views of the shipyard,” Witzling said, and they will be flanked by seven-foot-tall, industrial-looking piers with steel-fencing panels in eight-foot lengths. The concepts show superimposed artwork – a circle, letters and tick marks – that symbolize a ship’s displacement, or how high the ship is in the water based on the load it’s carrying.

“You inspired me to tell a story with those piers and look for clues to celebrate the shipyard,” Witzling said.

Martin said they’re gathering quotes to paint and clean up the exterior of the building next to the depot that last housed Red Oak Winery. It will be used as office and storage space.

The beautification project is expected to be completed by mid-summer 2022.