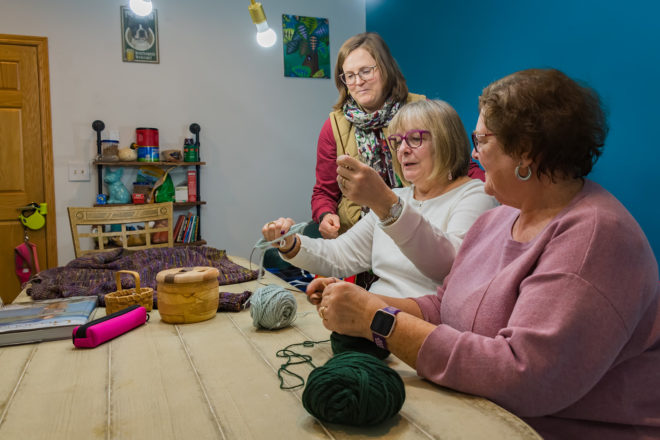 “There’s nothing like cold weather to knit a sweater or hats or mittens,” said Whitney Gross, who, along with her husband, Brandon Gross, owns Knit Whit’s Yarn & Crafts in Baileys Harbor.

This is their first winter in business, and she thought winter would be a time to slow down. But, because knitting is a somewhat seasonal hobby that’s well suited to dark, dreary days, it’s not as slow as she’d anticipated – but she’s not complaining.

“This is the time we expected to take a breath and enjoy the quiet, but it hasn’t been too quiet,” she said.

The Grosses opened Knit Whit’s on June 21, 2019, to serve as a year-round source for yarn and crafting needs – both the supplies and as a spot for classes and open knitting and crafting times.

“It started from a philosophy that I wanted to create a sense of community here,” Whitney said. “We have open craft on Sunday … I was surprised people started showing up for that, and that was really nice. I want the shop to feel welcoming and homey.”

Both Whitney and Brandon, who are originally from Waukegan, Illinois, worked for six years in an alternative high school system, and they felt burned out after a while. They spent time in Door County and camped at Baileys Grove Campground in Baileys Harbor, and it was during these trips when they began to feel as though they could make a shift in their lives.

“We honeymooned up here and always viewed it as a nice escape. When we came up in the fall of 2018, we were camping and we saw the Red Geranium had a sign up that their business was for sale, and [we] started talking to the owner and debating, ‘Could we do this and come up here?’” Whitney said.

They started to make plans and went through various iterations of what their business could look like. They knew that having a single-season business wasn’t going to work, so they needed something that had legs through all seasons. Ultimately they didn’t buy the Red Geranium, choosing the former Door County Broadband office instead, and settled on creating a yarn shop.

Whitney said she’s had a passion for knitting ever since a friend in grad school taught her how to knit, and the shop is an extension of that passion. “I’ve enjoyed the relaxation of knitting,” she said. “I taught crafts and mindfulness with my students, and now having the shop, I still get to teach in a way.”

Whitney said that the shop is “70 to 80 percent yarn shop, and the rest is other stuff.” In addition to what you’d expect to find in a yarn shop – yarn, knitting accessories, embroidery and cross-stitch kits and supplies, sewing notions and needle felting items – the shop also has some art supplies. Whitney said she’d been getting requests for watercolor supplies, so she keeps watercolor paper, paint and a few other items in stock. And, for parents who are looking for a quick birthday gift, she has a corner with items geared toward kids, including wooden models and crafting kits.

In addition to the stock, Knit Whit’s also offers space to create and work on projects. She hosts classes, fix-it sessions and open craft times. Crafters are invited to take their small projects to the shop to work on them in a group setting on Fridays, 10 am – 1 pm; and on Sundays, 1-5 pm. The back room of the shop is cozily set up for the crafters with coffee provided, and the shop dog, Gracie, may be perched in a corner, either dozing or keeping an eye on things.

Some of the instructors who teach at Knit Whit’s are Sandy DeMaster, who also teaches at Sievers School of Fiber Arts on Washington Island; Kephren Pritchett, a local knitwear designer; Amanda Shepit, who teaches crochet and private crochet; and Barb Zellmer, who teaches needle felting.

The first official year for Knit Whit’s isn’t complete, but Whitney said that the community – visitors, residents and fellow business owners – have made their first foray into business easier.

“We had such a warm reception when we opened on the 21st; that was our soft opening. When we opened that day, we still had boxes on the floor, and my husband was bringing over cash for the register, and there were people right outside right at 10 o’clock,” Whitney said. “I didn’t think it was for me. I thought it was for the other shops, and I remember a state of panic: ‘There are people here!’ Most of those people came back the next week for the grand opening.”

The Grosses also have another project in the works: They’ve purchased the Red Geranium business that was located a few doors down from Knit Whit’s. It has been a mainstay business in Baileys Harbor, operating under Walter and Kathy Vail since 1994, originally in the Baileys Harbor Visitor Center building. The shop was known for its extensive collection of kaleidoscopes. The Grosses are planning to update it to appeal to a broader audience, but, Whitney said, “We’re keeping some kaleidoscopes.”

Knit Whit’s is open Monday, Friday and Saturday, 10 am – 5 pm; and Sunday, 1-5 pm, in February and March. Learn more at knitwhitsyarnshop.com/#.