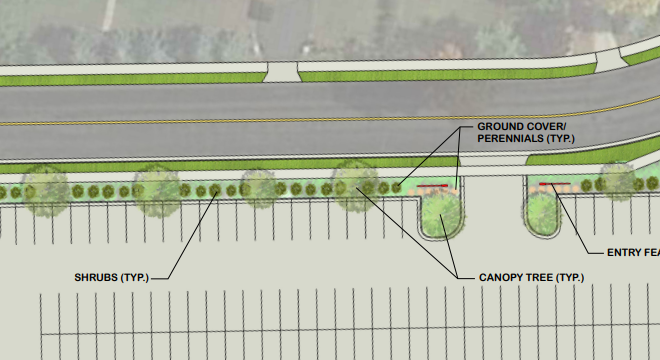 Sketches were done for the landscaping that’s coming to 3rd Avenue, but Fincantieri needs a contractor to complete the job.

The City of Sturgeon Bay has nudged Fincantieri Bay Shipbuilding to beautify the edge of its property this year, but it’s giving the owners some leeway in that design and timeline.

The idea of dressing up the shipyard along 3rd Avenue “goes back quite a few years,” with encouragement from the former Sturgeon Bay Visitor Center, as well as from residents and property owners across the street from the industrial site, said Marty Olejniczak, Sturgeon Bay’s community development director.

“We had talked about going after some grants for historical markers to really make it cool down there,” Olejniczak said. “But what really got it going was when Fincantieri was doing the major upgrade in its south yard and constructing the buildings they did, the city said we have to create a better buffer through here. They did a few things, but we’re still waiting on them to finish up the implementation.”

The city’s plan commission and aesthetics committee approved proposals submitted by Fincantieri, but the city did not make strict demands for the precise designs, said Tom Martin, Fincantieri Bay Shipbuilding’s (FBS) director of purchasing and facilities.

Martin said the city also did not give FBS a strict deadline, but the company wants to get going. The only problem is finding a contractor, and Fincantieri leaders want to hire local professionals. The company approached two local firms for help, but both said they’re busy for all or most of the summer. Therefore, FBS is still looking for interested and qualified parties.

“The city didn’t give us a deadline, but we are trying to get it done this year,” Martin said, noting it would be ideal to complete planting by early autumn.

“They’re not trying to shirk their responsibilities,” Olejniczak said. “They just haven’t had any luck getting somebody physically there to do it.”

The city has given FBS quite a bit of latitude and artistic freedom for the design, Martin said. The city wants the company to create a buffer between the shipyard and the 3rd Avenue residential areas without destroying the view of buildings and ships for the curious and visitors.

“We don’t want to hide the yard. People wanted to be able to see what’s going on, but they also wanted a little bit of noise and dust control. We don’t want a cyclone fence with barbwire on top,” Olejniczak said.

The plans Fincantieri submitted last year achieved a “happy medium” by creating some setback and a buffer without “engulfing” the yard.

Martin said the plans drawn by Graef USA engineering consultants of Green Bay incorporate “hardscape” and landscape, bushes and trees, and perhaps some low fencing and stone pillars flanking two sides of the employees’ driveway to the shipyard along 3rd Avenue and another at the corner of 3rd and Iowa.

FBS has not finalized which art to have on those seven-foot-tall pillars, but they could have maritime-themed stonework at the top. Proposals for art on the sides of the pillars or fencing include measurement features seen on ships’ hulls, bridge pillars and lock walls, such as geometric Plimsoll lines and horizontal draft marks. Martin said the pillars would incorporate steel, stone, brick and concrete.

When FBS gained permits and permission to put up some of its new buildings, the city required Fincantieri to provide the beautification. The project will extend along 3rd Avenue from near the old depot building to Iowa Street. Martin said FBS would be willing to do more landscape work if it erects another structure near the north side of the property.

FBS also sponsors the city’s fireworks, and this spring, craftspeople from the company helped to build the new sailing- and shipbuilding-themed fountain in Graham Park on the waterfront near the Steel Bridge, 1st Avenue and Pennsylvania Street. Ace Marine of Green Bay completed the vertical, aluminum-colored sail for the fountain, and welders from FBS completed the ship’s bow at the fountain base.

Fincantieri also planted trees with the development of its employee parking lot north of Iowa Street.

When Will the Mark W. Barker Depart?

Local workers said they do not know when exactly the M/V Mark W. Barker – the 639-foot freighter constructed in Sturgeon Bay – will depart for Interlake Steamship headquarters in Cleveland. Interlake, not Fincantieri, makes that decision, so the first notice Sturgeon Bay residents get about the departure might just come from the ship’s horn.

The boat was given a ceremonial launch in October 2021 at the Sturgeon Bay yard, and the official christening of the vessel was forecast at that time to take place in June 2022 in Cleveland.