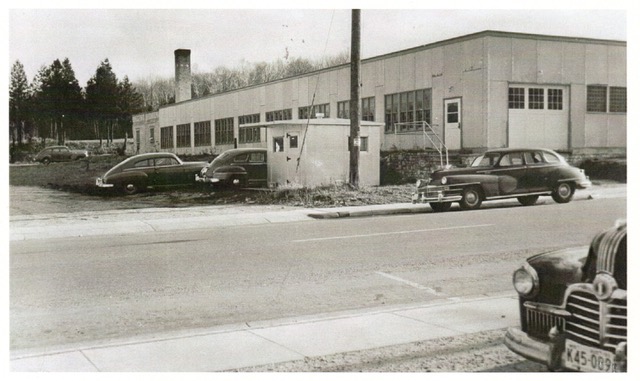 The Walkway Shops on the corner of Mill Road and Bay Shore Drive, the site of the proposed 40-unit hotel in Sister Bay. Photo likely taken in the 1950s. Photo courtesy of the Sister Bay Historical Society.

In the spring of 2007, the Village of Sister Bay stunned residents when it announced it was buying Helm’s Four Seasons motel for $4.9 million to expand its public waterfront.

At the time, many residents and business owners complained vehemently to the board of trustees that removing Helm’s and its 42 rooms would devastate downtown businesses.

Ten years later, the board and plan commission are getting blasted again, this time for moving ahead with approvals for a 40-unit hotel one block inland. The board’s loudest critics are complaining that the hotel will make the village too busy.

The latest controversy surrounds Jaco Management’s proposal to build a 40-unit, four-story hotel next door to CHOP restaurant on a piece of land that has sat vacant for more than a decade. Jaco Management also built CHOP.

The village has been desperately seeking a developer for the centerpiece property ever since a proposal by Arthur Braun died in the early 2000s, but in the public debate over the proposal, many of the circumstances that led to the proposal have been forgotten. Here we’ll look at some of the most common critiques of the proposal in the context of the village’s decades-long effort to create an identity. 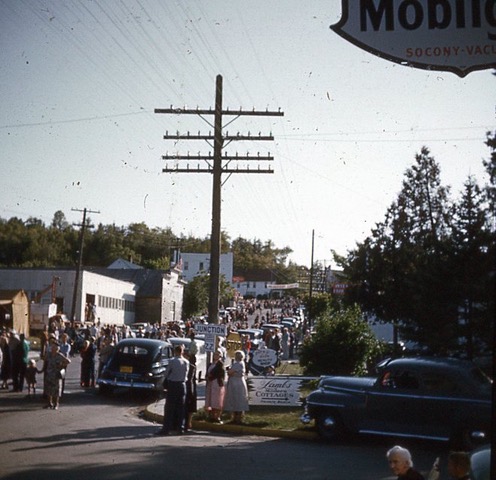 The view from the corner of Mill Road and Bay Shore Drive looking south, likely taken in the 1960s. The proposed hotel property is the white warehouse at left. Photo courtesy of the Sister Bay Historical Society.

There’s too much development in downtown Sister Bay.

The resurgence of Sister Bay business during the last two years has led many to believe the village is in the midst of a crush of new commercial development, but it’s not the case. Most of the new restaurants in the village replaced existing eateries and businesses (though with many more seats). When added up Sister Bay still has a net loss of at least 15 businesses downtown compared to 20 years ago, when the Walkway Shops housed 10 businesses, Helm’s hotel stood on the waterfront, and several other small businesses dotted main street.

The hotel would be the first new hotel built in Sister Bay since the 46-unit Birchwood Lodge was completed in 2001, and the first rooms added to the community since Open Hearth Lodge added 12 rooms in 2015.

“We could have added even more,” said Nora Zacek, owner of the Open Hearth, who said she supports the downtown hotel. 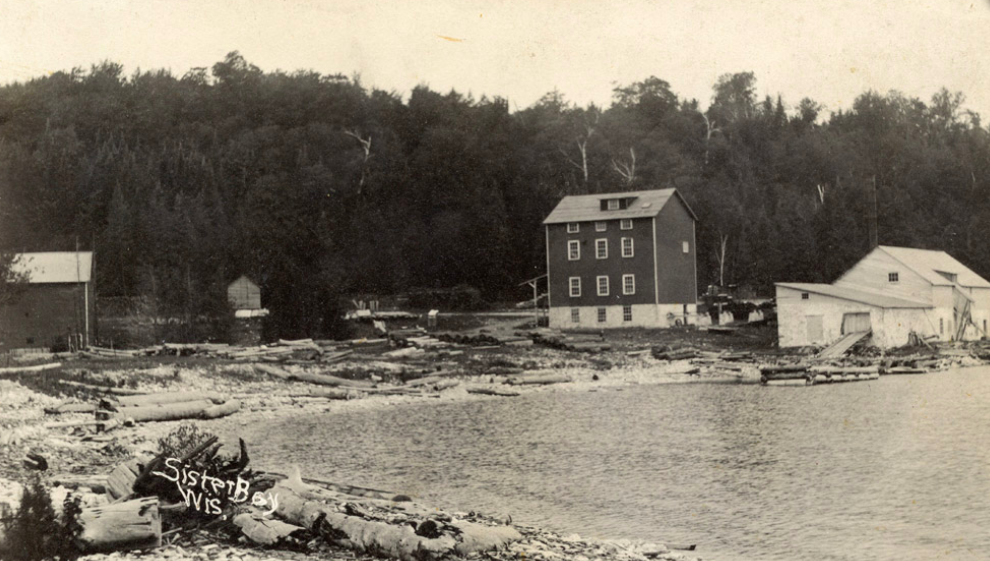 The Berns Brothers lumberyard once sprawled across the shore where the Sister Bay Yacht Club now stands. Photo courtesy of the Sister Bay Historical Society.

The hotel is ugly and changes the historic small-town charm of Sister Bay.

Those who remember Sister Bay’s historic small-town charm have a remarkable imagination. When Sister Bay embarked on waterfront master planning in 2008, one of the major complaints was that Sister Bay lacked an identity. The village has fewer historically significant buildings in its center than any other sizable Door County community.

Further, its main street was long dotted with lackluster buildings. For decades the hotel property was home to a Masterfreeze refrigerator assembly plant, which later became the Walkway Shops. The Mill Road and Bay Shore Drive intersection was home to two gas stations, a lumber yard sent logs floating onto shore into the 1960s, and sewer and water drained into the beach.

As one senior resident told me recently, “I grew up in Sister Bay. I love Sister Bay now and I loved it then, but it wasn’t this pristine waterfront town. We were literally swimming in sewage at the beach when I was a kid.” 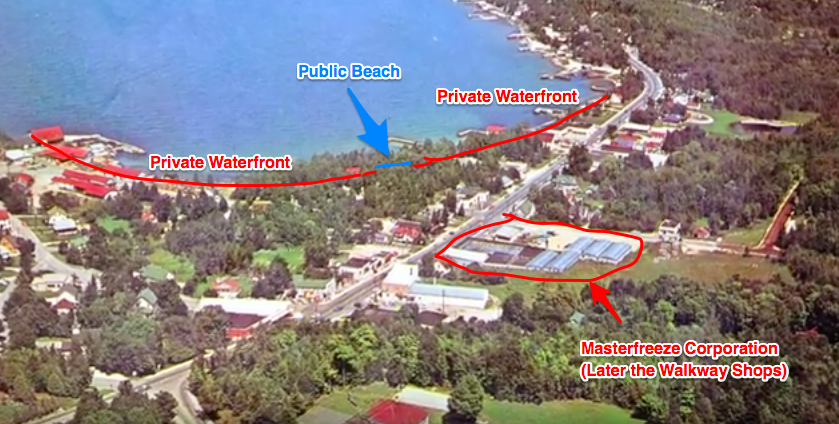 An aerial view of Sister Bay shows the footprint of the Masterfreeze Corporation building (proposed site of a 40-unit hotel) as well as the almost entirely privately-owned Sister Bay waterfront.

There’s too much traffic and not enough parking so nobody will come anymore.

Sister Bay only has a parking problem if you consider it unbearable to park a short walk from your destination. Even on weekends there are open parking spaces on Bay Shore Drive, and always a lot of spaces just a block off of it on Mill Road and behind Bhirdo’s gas station.

Adding 40 hotel units might create a problem on the busiest days, but no good planner should prioritize parking a few days a year over the needs of the community for the other 350. It’s also misleading to argue that the village isn’t addressing the parking issue. I wasn’t a fan of the village turning a prime property into a parking lot across from Waterfront Park in 2015, but with that lot, the public lot behind CHOP, and through adding striped spaces at the beach and Mill Road, the village has added more than 200 parking spots in the last four years, according to Village President Dave Lienau.

As for whether the bustle of Sister Bay will turn visitors off – the numbers say they won’t. Sister Bay attracted more visitors to its hotels than ever before last year, leapfrogging Ephraim into third in the county in room tax revenue for the first time since collections began in 2007. Room tax revenue was up 10.4 percent for the year, compared to just 4.2 percent county-wide. Sister Bay’s 84.21 percent occupancy rate in July was the highest recorded in Door County in 2017.

The top room tax generator is Gibraltar, the other community where people most commonly complain about traffic and parking. The data clearly show these concerns don’t turn visitors away. 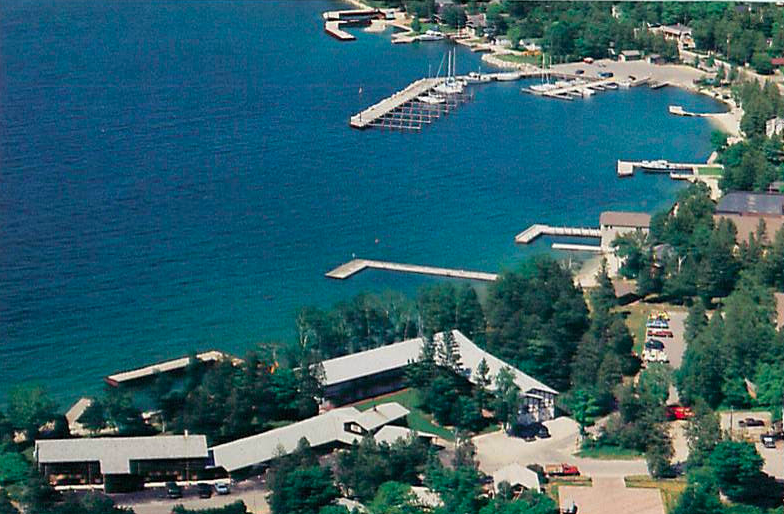 An aerial view of Helm’s Four Seasons from a promotional postcard. The hotel was located where Waterfront Park and Pavilion is now located. Before the village bought the 42-unit resort for $4.9 million in 2007, the owners were planning to develop condos and an expanded private marina on the property.

Of all the concerns, this is the most important. The lack of quality workers in Door County is a real problem. But it’s not a reason for a board to say no to a development project. It should, in fact, drive up wages for the best workers. It’s also true that no community has done more to incentivize affordable housing projects over the past decade than Sister Bay, for better or worse.

Finally, it’s important to remember that this hotel plan didn’t come out of the blue. A retail and residential development of similar scale, though not as tall, was first proposed by the Braun family and approved to positive response in 2004.

When the village purchased Helm’s in 2007 it embarked on a planning process that included dozens of public meetings and listening sessions over five years. That resulted in a master plan to pay for the waterfront projects with tax revenue from high-density development across the street.

Six years ago I wrote that Sister Bay was a dead zone, and it was. The loss of the Walkway shops and closing of other businesses left a gaping hole in the middle of the village. The board and administrator were labeled anti-business.

To their credit, they listened. After gathering public input on what could help business, they relaxed parking requirements, signage restrictions, and raised caps on building heights to entice lodging developers.

This hotel may be jarring because the site has sat empty for so many years, but it’s almost precisely what the village and its residents have been asking for more than a decade. 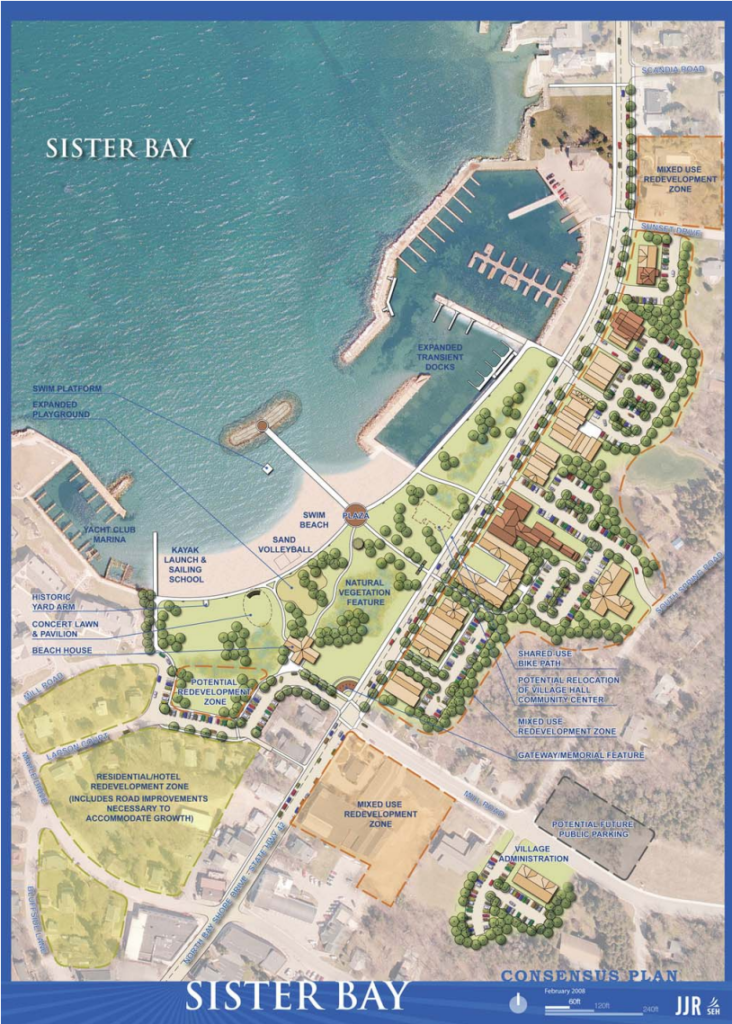 The Sister Bay Waterfront Master Plan approved in 2013. The plan developed through dozens of public meetings and visioning sessions calls for higher density development on the east side of Bay Shore Drive to pay for public space and improvements on the waterfront. 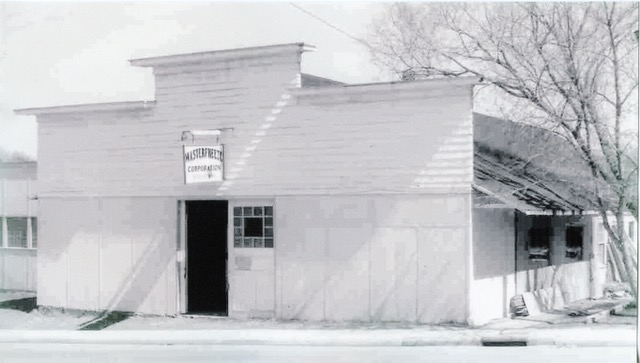 The main entrance to the Masterfreeze Corporation building on Bay Shore Drive. Photo courtesy of the Sister Bay Historical Society. 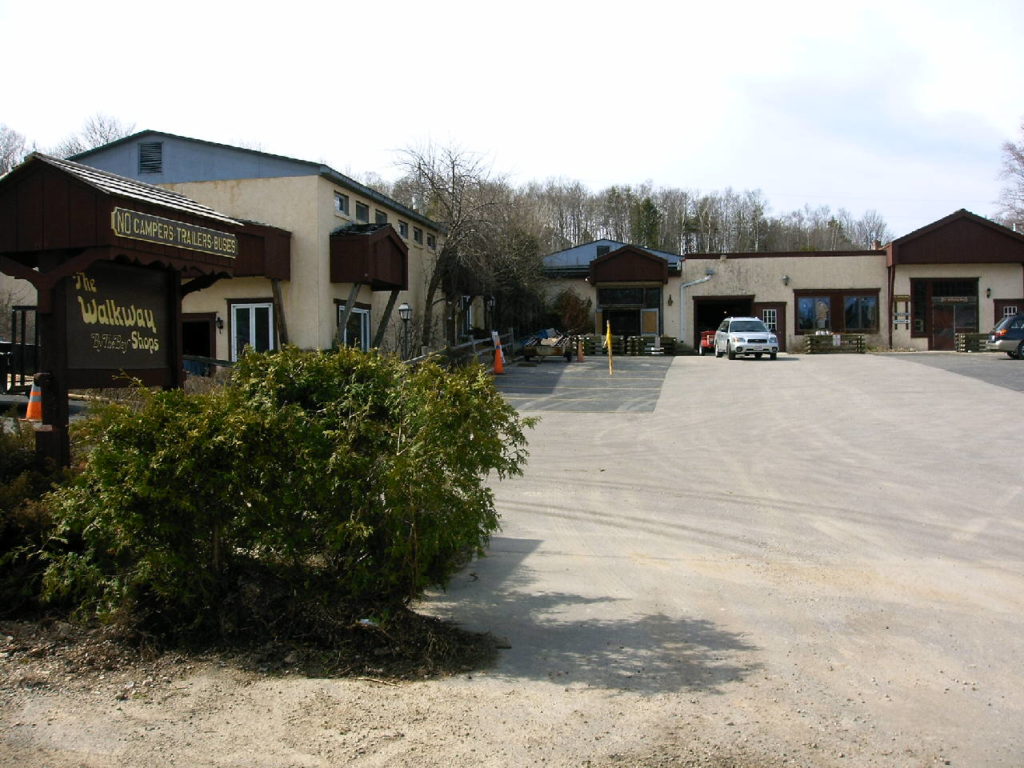 The Walkway Shops in 2005. The shops were once home to several retail shops, as well as Beanie’s Restaurant where CHOP now stands. Submitted.