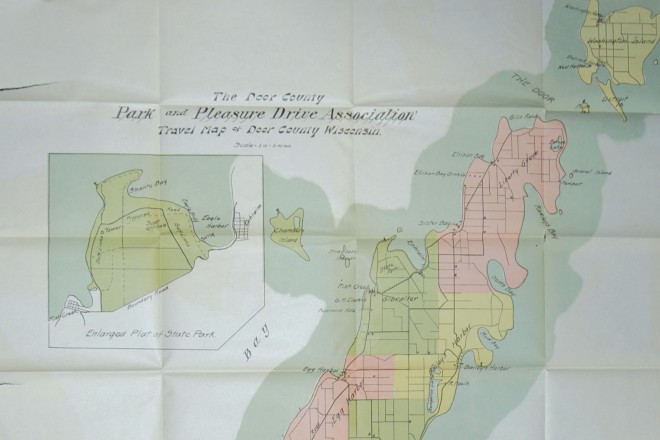 For any tourist destination such as Door County, marketing the place and what it has to offer is absolutely essential. The medium for delivering the message has commonly fallen to some form of ephemera. Ephemera is printed matter intended to be of use and value for only a very short period of time. Current examples might include a brochure for a motel or attraction, a Key to the Door …Illustrated, or the Door County Fun Map.

As a retired professional geographer, pieces of ephemera that include a map are of particular interest to me. Recently, while reading back issues of the Door County Advocate on microfilm in the Laurie History Room at the Sturgeon Bay Public Library, an article jumped out at me. “Door County Beautiful” was the headline. The article, published in the December 25, 1913 issue, outlined a plan for publishing a booklet extolling the virtues of Door County. It was specifically intended to serve an emerging tourist industry. The booklet was immediately added to my “want list.”

While want lists represent what one hopes to find and buy, these items are seldom found for sale. Yet, wonder of all wonders, one day while perusing the shelves of a Milwaukee used book store, I found a copy of the elusive booklet. As it turned out, although the motto “Door County Beautiful” still played a prominent role in the booklet, it had been titled simply Door County Wisconsin when it was published in 1914. But what a gem it is.

Credit for this booklet’s existence is owed to one A.L. (Arthur Lorenzo) Hatch. He was born in Sherburne, Chenango County, New York in 1846, moved with his family to Ithaca in Richland County, Wisconsin at age 10, and lived there for about 30 years where, according to his obituary, he engaged in “practical horticulture.” As a progressive farmer, he was one of the early members of the Wisconsin Horticultural Society, which he joined in 1876. His nursery business in this locale eventually gave way to a logical extension: the fruit growing industry. In 1892, Hatch came to Door County to check out the suitability of the area for fruit growing and bought property together with E.S. Goff, then a professor of horticulture at the University of Wisconsin. In talking with the locals, the men became convinced that the county’s soil and climate were ideal for orchards of apples and cherries. Ultimately, Hatch was credited with being “…the father of the commercial fruit industry of the county…” according to his obituary, because of his own personal success and his proselytizing efforts.

So taken was Hatch with the county that he was moved to author another article, titled “Opportunities for City-Bred People in Door County,” published in the annual report of the Wisconsin Horticultural Society. This article promoted the area as a place for establishing commercial orchards, especially cherry. But Hatch did not limit himself to promoting just orchards. His enthusiasm for Door County was unbounded. The Wisconsin Horticultural Society article is illustrative: “If he [a city bred man] knows how to harness a team, milk a cow, grease a wagon, plant a garden, to plow or cultivate a field, he may avail himself of these opportunities with the full assurance that they are as reliable, as satisfactory, and profitable as can be found anywhere.”

Neither did Hatch limit his enthusiasm to agricultural pursuits. He was a real promoter of all things Door County, even the relatively new phenomenon of tourism. Hatch brought together representatives from the Commercial Club, the Sawyer Development Club, and the Park and Driveway Association to plan for publishing a booklet to serve as a “guide and directory” for the county. To be included with the booklet was a map. The Advocate reported that “Mr. Hatch is having a map of all the roads in the county drawn by A.C. Greaves, C[ivil] E[ngineer]… the map will certainly prove of great value, not only to the tourist, but likewise to many people who have made their homes in the county all their lives.” The article went on to identify all of the features to be included in the map, which, in the final analysis, were “…to enable the traveler to locate himself in case he should become confused as to his whereabouts.”

There is no doubt about the purpose of the booklet: to attract tourists. So convinced that a map was essential for attracting tourists, Hatch was willing to invest his own money in the project. That same Advocate article reported that “The cost of getting out the map is paid by Mr. Hatch as a present to the Association.”

True to advance publicity about serving the tourist trade, the map was identified in its title as a “Tourist Map of Door County Wisconsin.” Printed in a four-color format in a scale of one inch to two miles, the map showed the locations of roads, schools, churches, creameries and cheese factories, orchards, steamboat docks, and quarries. The final map, printed by the Kenyon Company of Des Moines, Iowa, was included at the end of the booklet as a fold-out measuring approximately 23 by 25 inches.

The booklet to which the map was attached was titled, on the title page, “Travel Map and Guide to Door County, Wisconsin.” It was published by the Door County Park and Pleasure Drive Association. As you might reasonably expect, A.L. Hatch was identified as the association’s president. All 16 pages were packed with valuable information for the visitor and not really the local citizen. In this regard, it was not unlike its more modern ephemera counterparts. Not relying solely on the map for graphics, several photos were interspersed throughout the text.

It is important to mention that another figure had a prominent role in getting the booklet published and distributed. Inside the front cover a note credits him as follows: “This booklet is presented with the compliments of Richard A. Noelck, Real Estate Dealer, because it points to one of the most attractive parts of Wisconsin…” Noelck picked up the tab for printing services at the Advocate Press to match Hatch’s monetary contribution for the map.

Coincidentally, Noelck and Hatch had similar backgrounds. Noelck was also born out of state – in Chicago – in 1880 and came in 1909 to the county, where he bought a farm near Baileys Harbor. In short order, he developed a profitable agricultural operation centering on dairying and fruit raising. In just three years by 1912 he had established, according to a biographical sketch, “…one of the leading real estate offices of Sturgeon Bay…” Rapidly becoming a major promoter of Door County like Hatch, Noelck apparently was involved in this promotional project for very different reasons.

What was Noelck’s motivation for involvement? The Door County Wisconsin booklet was without advertising but for one major exception: an ad for Noelck’s real estate business occupied the entire back cover. His involvement is very evident in the opening sentence of the ad in this tourist brochure. “A trip here will convince you of the possibilities of this section for a profitable investment, both with regard to pleasure and business opportunities and Real Estate investments.” As a shrewd businessman, Noelck saw great potential for selling real estate to visitors.

Little has changed over time. The cooperative efforts of Hatch and Noelck are very evident today. Tourism continues to complement real estate endeavors. Tourists fall in love with Door County, buy vacation properties or, in many instances, purchase homes and become permanent residents.