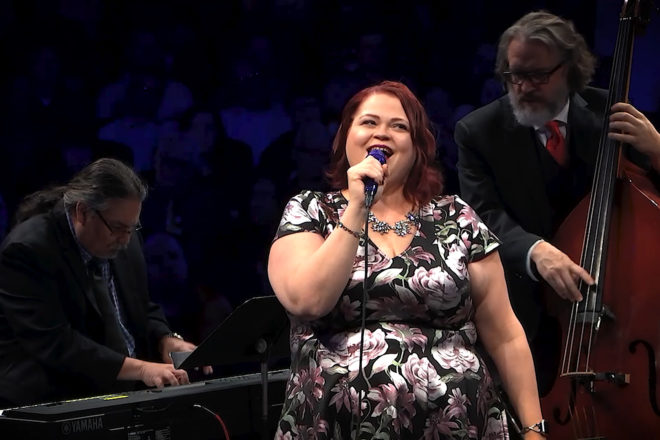 Most people are terrified the first time they sing solo on stage, but Erin Krebs started singing jazz in college as a way to avoid the nerves of her classical performances.

Studying at UW-Oshkosh to be a band teacher, Krebs was more accustomed to the high-stakes world of classical lessons, recitals and college juries on her primary instrument, flute, when she was asked to audition for the jazz ensemble for an upcoming concert.

She got in – though she was the only one who auditioned, she said, laughing. Without her own expectations and pressure, or those of her classical flute teachers, her performance anxiety fell away, and she discovered what would become her lifelong love: jazz singing.

Jazz came naturally to Krebs. She continued to become enmeshed in the local jazz scene through college and began to perform locally. After graduating, she continued to perform, started giving private music lessons, and worked as a general music teacher at The Academy in Appleton (a Cambridge Academy School) for eight years, and then at the Wisconsin International School in De Pere (an International Baccalaureate school) for two years.

Both schools eventually closed, and the Academy closure was the final push Krebs needed to take the leap to become a full-time gigging musician and private-lesson teacher.

Jeff Johnston – her longtime guitarist and musical collaborator – is also her partner, which proved serendipitous in 2020. Musicians – quarantined and livestreaming from their homes – found themselves suddenly faced with a drastically reduced musical talent pool to hire from: basically, the people they lived with.

With all their bookings postponed – or evaporating altogether – Krebs and Johnston began livestreaming as a way to make a few extra dollars, keep their creative fires burning and remain connected to their audience.

They started streaming twice a week, keeping things interesting by incorporating different themes or curating shows featuring the music of a particular artist, but as the weather became warmer and people began to spend time outside, the virtual concerts stopped feeling worth the effort.

Krebs also continued to teach private music lessons throughout 2020, going virtual to stay within the safety guidelines and fashioning an iPad setup overhead so she could demonstrate techniques to her piano students.

During the summer, Krebs was able to do a few live outdoor performances and was surprised to find how quickly her stage confidence had ebbed. Twenty years of singing had given the self-described introvert an unshakeable stage confidence, but only a few months away from live shows had produced a noticeable negative effect.

Compounded by general COVID-19 fears about being around crowds and the need to distance herself from people, the stress of the year had stifled her creativity, and she found herself with little desire to write music. Instead, Krebs spent most of her spare time – when not teaching or livestreaming – learning repertoire and gravitating to her comfort zone of familiar jazz standards.

Postpandemic, she’s looking forward to collaborating with other musicians, laughing when she pointed out that as much as she loves playing with Johnston, she’s ready for some other musical energy from bass players, drummers and pianists.

Krebs is also planning to record an album of jazz standards: a selection of the songs that have been nurturing her spirit during this tough time.