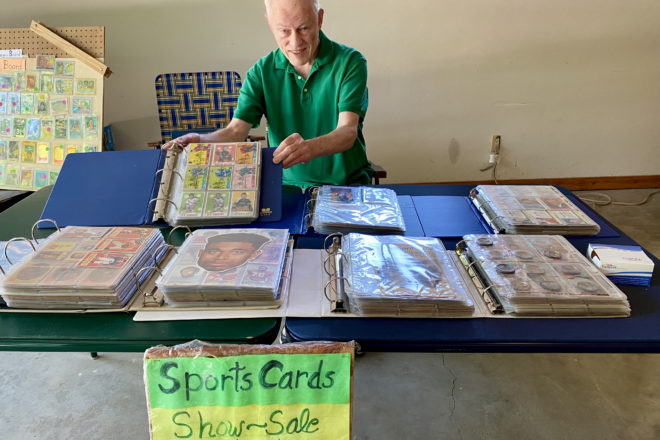 My wife, Anne, doesn’t like to peek inside our detached garage. It’s probably better that way.

She’s not much for clutter, and she’s not a saver. I am the opposite – a slowly recovering pack rat. So when she looks into the garage and sees the shelves I spent hours building, only to fill them with boxes of my childhood sports-memorabilia collection that she’d just as soon see in the dumpster, it gives her a spike of anxiety.

She would probably rather that I never talked to Joe Miller.

Like me, Miller is a pack rat. He has packed away sports cards since he was a little boy growing up in Neenah. He’s exactly twice my age, which will only add to Anne’s anxiety (and mine, too, because I’m not entirely confident about the structural integrity of those shelves I built).

“I’ve been a collector my entire life,” Miller told me. “I started in the early ’40s and ’50s. My mom saved my collection. You hear so many stories of boys whose parents threw out their cards when they went to school or moved out, but I still have my collection because of my mom.”

My mom didn’t save mine. I probably have friends and roommates to thank (Anne might use a different word) for that. Through each move I made in my 20s, the shoulders of friends who signed up to help would slump when they looked in a basement or garage and saw the wall of boxes holding cards, newspaper clippings, Wheaties boxes and a decade’s worth of Sports Illustrated. Mom didn’t get stuck with that chore, but some of my earliest memories of my collection are of her coming home late at night from a shift as a nurse at the Dorchester or St. Vincent’s with a 45-cent pack of 1988 Topps football cards for me.

Miller traces his first collecting memory to his dad.

“I remember one day I was on the front porch of our house in Neenah,” Miller recalled. “Dad had given me a nickel pack of cards, and I opened it and said, ‘Hey, I know that guy!’ It was a 1948 Leaf Babe Ruth card. That was my first memory of card collecting.”

He still has that card, which helps him to carry that memory with him. His collection includes many cards from that golden era of collecting – Mickey Mantles, Babe Ruths, Joe DiMaggios. He speaks proudly of his 1936 Quaker Oats Babe Ruth card and 1951 Topps felt-backs, and whimsically of the quirks of collecting at a time when kids put them in the spokes of their bike tires and stored them wrapped in rubber bands.

“They put some cards in cigarette packs to separate the cigarettes,” he said. “So some of them have tobacco stains. Nowadays it’s all about having cards in mint condition, but back then, that’s what you’d get.”

By the time I was starting my collection in the mid-1980s, the tobacco cards were long gone, but there were other stains. The packs I would pick up after jumping off the bus at Witalison’s grocery store in Egg Harbor came with a stick of gum. That stick would stain the back of one card, and inevitably for me, it was the best card in the pack.

But for Miller that was a minor concern, as it was for me.

“There’s a lot more to collecting than money,” he said. “It opens social venues. I love to talk to other collectors and see what they have.”

Some days when he came home stressed from work, his wife would know what to say.

“Why don’t you go up and relax with your cards for a while,” she’d tell him. He would happily oblige.

When he moved to Omaha for his career and didn’t know many people, he started going to card shows.

“I started making friends there – people I stayed connected with,” he said.

Like Miller, I was obsessed not just with the pictures on the front of the cards, but also with the stories told on the back. Much of my early reading came from the backs of football and baseball cards, devouring statistics and biographical information, socking away data points where math or other useful skills might otherwise have found a home in my brain.

I talked to Miller by phone and had never met him in person, but I knew exactly what he meant.

I had the bad luck of collecting when the biggest baseball stars were caught up in the steroid scandals of the 1990s and card companies massively overproduced, crushing the value of my collection.

But there are apparently a lot of folks now hitting their 40s and 50s and feeling a wave of nostalgia for their childhood heroes. Card collecting is hot again, so I occasionally convince myself that I’ll get around to organizing and selling much of my collection, or giving away pieces.  But I don’t. Who has the time?

During the July Fourth holiday, Miller hosted a card show in his Baileys Harbor garage, welcoming all ages to buy, sell or trade cards with him. He also offered a bargain board, with proceeds going to Door County food pantries. He raised $168. The United Way found a match to bring it to $336 to help feed families.

That’s $336 to help feed families, who knows how many friendships, and nearly 80 years of joy for Joe Miller. All thanks to a lot of cardboard.