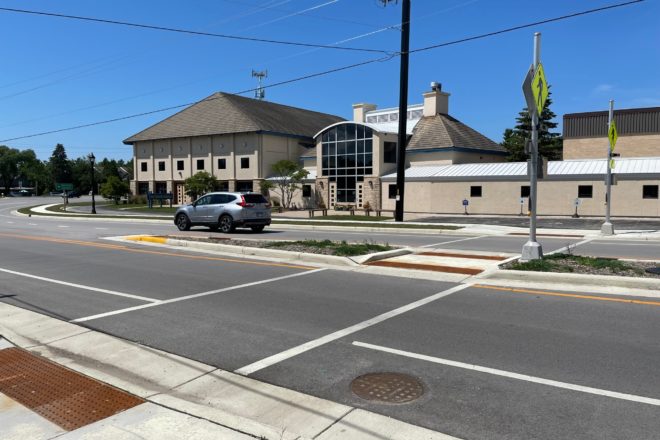 The future of the Fish Creek Grill is coming into focus.

The restaurant that closed last fall after eight years recently opened as a bar with not so much a name as a description: Cash Only Noodle Bar, “serving up noodles and booze with nothing to lose,” under new owners Scott Schmitz and his wife, Karin Skare. But if all goes to plan, this restaurant will be short lived.

The Door Community Auditorium (DCA) aims to buy the property located directly across the street from the venue and convert it into an office and performing-arts education center. The Gibraltar Board of Supervisors will review plans for the change of use during its July 7 meeting. If approved, the purchase would be completed in October.

“It solves a lot of problems we’ve lived with since we were founded 30 years ago,” said DCA Executive Director Cari Lewis.

The auditorium is located on the grounds of Gibraltar Area Schools, squeezed into a corner of the property between Highway 42, the softball field and the elementary school. That space has grown tighter over time as the Department of Transportation has removed trees and green space to improve safety on the highway. The bulk of the auditorium’s parking is located on the other side of the school, and there’s no room for expansion on the site.

“We have the accessible parking we need according to code,” Lewis said, “but given the demographics of our audience, we have a lot of patrons with mobility issues who want more parking closer to the entrance.”

For years, there was no easy way to fix that, but when Gibraltar completed the Highway 42 reconstruction last year, it extended sidewalks in front of the auditorium and added a crosswalk with an island that makes pedestrian crossing much safer. When the Fish Creek Grill went up for sale last fall, Lewis and her board began to reevaluate an idea that had percolated within the organization for years.

“When they added the sidewalks and the protected crossing, it completely changed the landscape here,” Lewis said.

But Schmitz also had his eye on the property. He completed the purchase in February, seemingly ending the auditorium’s plans. When Lewis reached out to Schmitz to welcome him to the neighborhood, however, it became clear that his plans for the property were still up in the air and that a new deal was possible.

“When Cari called, we were at a point where we realized we might be in over our heads with this building,” Schmitz said. “We liked the idea the auditorium had for the space, both for them and the community, and we had another option.”

Schmitz also owns the former Taco Cerveza building downtown and is finalizing plans for a restaurant in that space in 2022. If the auditorium’s plans are approved, he would retain the liquor license from Fish Creek Grill and plan to transfer it to that location. That’s just fine with Lewis and the DCA board.

“We have no interest in being a bar and grill or competing with local restaurants that have been great supporters of ours,” she said.

For the auditorium, the move will provide not only office space, but also flexibility. Lewis said the plan is to renovate the building to host small performances such as the Coffeehouse Concert Series and the Distinguished Lecture Series, as well as donor and artist receptions. The auditorium also aims to partner with other nonprofits to use the space in a variety of ways – as an educational space for guitar and piano lessons, for example, and potentially to resurrect the Door County strings program.

“This corner, with Gibraltar School, Peninsula School of Art and the Door County Y, is a hub for education, health and the arts, and this furthers that,” Lewis said.

The auditorium will reduce the size of the kitchen to support caterers for small events and potential pre- and post-show receptions.

Lewis acknowledged the timing of the deal may strike some as odd. The auditorium is just now bringing back live performances after being closed for 14 months during the COVID-19 pandemic.

“Several factors – including DCA’s conservative administrative and financial management of the past 10 years, emergency governmental funding restricted for staff retention and fixed operating costs, a generous rent reduction from the school and loyal donor support – helped us successfully navigate the unprecedented landscape of the last year,” Lewis said.

When the new opportunity arose, 24 donors came forward with more than $500,000 in contributions specifically earmarked for the Fish Creek Grill purchase. The organization aims to raise an additional $552,965 to renovate the space, with plans to complete the project in late spring or early summer of 2022.

In the meantime, Cash Only Noodle Bar will serve up noodles and booze, Tuesday – Thursday, through September.

“It’s very much a ‘You can’t have it your way’ operation,” Schmitz said. “No substitutions. Take it or leave it. We’re open on days that other restaurants close, and we get a chance to try some things out.”

Most restaurants are lucky if they survive their first year. This one is designed not to.