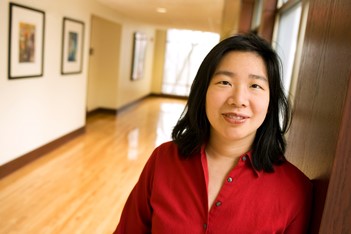 Lan Samantha Chang knows a thing or two about fiction, about writing. This Appleton native has made her way from the halls of Yale, to New York City’s bustling publishing scene, to the hallowed classrooms of the Iowa Writers’ Workshop, where she is currently the director. (If you aren’t familiar with the Iowa Writers’ Workshop, let’s just say it’s a very big deal, turning out the crème de la crème of writers.)

In clear, elegant prose, Chang has penned three novels, Inheritance; All Is Forgotten, Nothing Is Lost; and The Family Chao (to be released in 2022); as well as a collection of short stories, Hunger. Her work has twice been chosen for The Best American Short Stories, and she has earned a plethora of creative-writing fellowships. The Hal Prize is honored to have her as this year’s fiction judge.

Chang took some time to correspond with me about her fiction, her writing process and the key to compelling fiction.

Sally Collins (SC): What drew you to writing, and how did it take you down such a prestigious path?

Lan Samantha Chang (LSC): I wanted to be a writer since I was four years old, but until I was in my twenties, it didn’t occur to me that I could publish the stories I knew. My parents, Chinese immigrants, wanted me and my three sisters to pursue stable, professional paths.

And in the world outside of family, there were very few published works of fiction by Asian Americans. It wasn’t until 1976, when Maxine Hong Kingston’s Woman Warrior was published, that fiction about Asian immigrants became widely known to the general public.

I attended Appleton West High School, a very good school that sent several students to the Ivy Leagues. After college, in an attempt to follow my parents’ wishes, I enrolled at Harvard’s Kennedy School of Government. It was while languishing at the Kennedy School when I decided to seriously pursue my long-held interest in fiction writing. The Iowa Writers’ Workshop transformed my life, and 15 years ago, when the opportunity arose to apply for the directorship of that program, I found my life path again changed.

SC: I’m currently reading your novel All Is Forgotten, Nothing Is Lost, a book centered on the two very different paths of aspiring poetry students. The book includes settings and characters that I’m sure are familiar to you, given your own path and career. As a fiction writer, how do you draw from your own experiences without making it about you?

LSC: All Is Forgotten, Nothing Is Lost is the result of my 15-year submersion into the quirky incubators that are creative-writing programs. Almost every line of dialogue in the novel about writing and writers was literally said to me at some point in my life. I feel I learned so much about writing and living the creative life from the time I spent training to become a writer and teacher.

These thoughts are distilled into the novel, but in order to transform these ideas into a story, I invented a number of characters. Two very different characters anchor the novel: the friends Roman and Bernard. I suppose I’m more like Roman than I am like Bernard, but my life path has turned out to be very different from his.

SC: On the other hand, your first novel, Inheritance, is an epic family tale that begins in 1930s China and spans seven decades. How do you go about creating these scenes and characters from times and places you did not witness?

LSC: I grew up listening to very infrequent stories of my mother’s childhood in wartime China. Some of her experiences were quite traumatic: She witnessed bombings, observed deaths and experienced repeated geographical dislocation. My father, who had an even more traumatic experience during the Sino-Japanese war, never spoke about it to me or my sisters.

As a result, I grew up hungry to understand what my parents had been through. My first novel was an attempt to create a narrative that would traverse the times and places my parents knew. To be honest, creating scenes and characters from those times was very challenging because I had no stories on which to base them. Inheritance was my most challenging novel to write. For seven years, I was entirely focused on the project. I don’t know if I would have tackled such a monumental project if I had known how complex and difficult it would be.

SC: Tell us about your new novel, The Family Chao, which will be published in February 2022. What can readers expect?

LSC: The novel is a plunge into an intimate and unexpected Chinese American community in the Midwest. It’s about the familial, societal and racial forces that might influence three Chinese American brothers to become very different men. Bottom line, readers can also expect some belly laughs, a murder and a trial. Also food.

SC: What, in your opinion, makes a good short story?

LSC: I believe the words of my former teacher, the late writer John L’Heureux, who always said, “A short story is about a moment after which nothing will be the same again.” According to John, this moment doesn’t have to represent a change in a character; it can be a missed opportunity. Still, by the end of the story, nothing will be the same again.

SC: What is your writing process? Do you have multiple projects going at once?

LSC: Over time, I’ve developed a few methods I pursue when working on my novels. Perhaps the most effective, for me, is to write scenes and passages out of order. Writing my first novel, I wasted a lot of time on the opening: I spent years writing and rewriting the first pages, when in reality, I didn’t even know what they would be until I’d gotten to the end. Now, when I find an idea that interests me, I begin quickly and sketch in any of the parts I’ve most vividly imagined. Then I fill in the rest.

SC: You work with the best of the best when it comes to literary fiction. Is there a piece of advice, a trick or a skill that you feel every writer – even they – need to be reminded of and know?

LCS: My one piece of advice for writers is to follow your own heart. Don’t try to figure out what is in fashion. Write what you want to read, and write about what matters to you.

The 2021 Hal Prize is now accepting submissions in fiction, nonfiction, poetry and photography. The deadline to submit is Sept. 15. To find out more and submit, visit thehalprize.com.