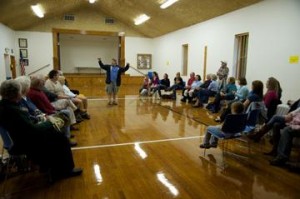 Crew from the independent movie, Feed the Fish, were back in Sister Bay June 29 to film some transition footage outside the old village hall across from Al Johnson’s. The bulk of the movie, directed by Michael Matzdorff and starring Tony Shalhoub, was filmed in Door County in February and March. A special Door County screening is expected in September, but a final date has not been selected. To learn more about the movie visit http://www.feedthefishmovie.com.