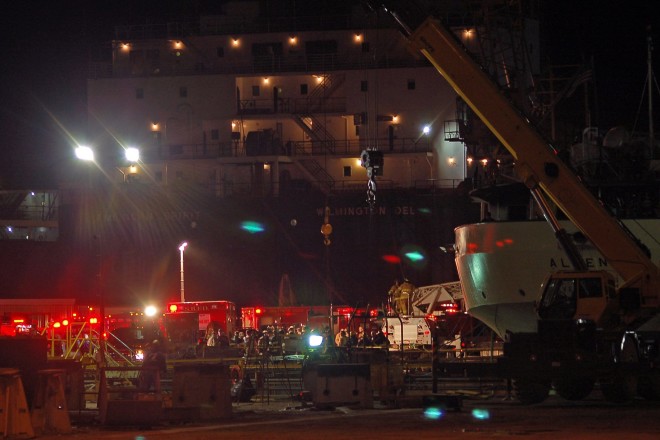 Emergency crews responded to a fire aboard the Alpina Dec. 11. Photo by Jim Lundstrom.

Emergency crews from northern and southern Door joined Sturgeon Bay crews in responding to an emergency at Bay Shipbuilding at about 6 pm Friday with a fire aboard the 519-foot cement carrier the Alpena, owned by Inland Lakes Management of Muskegon, Mich.

No injuries were reported, and by 10:30 pm firefighters remaining on the scene were rolling up hoses on the ship. No details yet on what caused the fire.

The Alpena was launched in 1942 as a 638’ iron ore carrier called the Leon Fraser, one of five in a series of freighters for the Pittsburgh Steamship Co. The Alpena is the only surviving member of the fleet. The four others were scrapped. In 1989 the Fraser was shortened by 120 feet and converted into a self-unloading cement carrier. In 1991 she was renamed the Alpena. She carries a crew of 21.