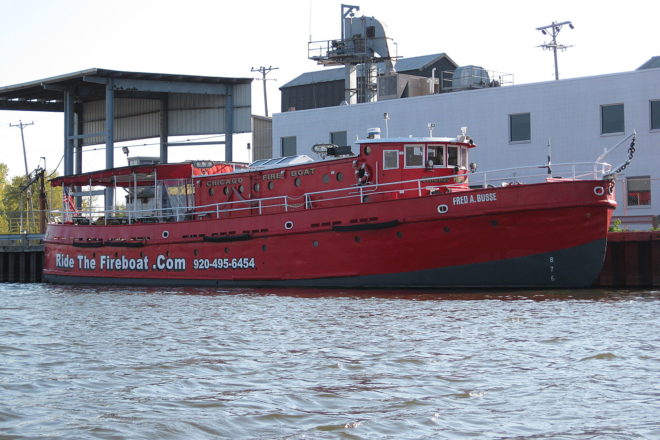 Sometimes there’s something that’s a pleasant part of our life, and then it’s gone, leaving us wondering where it came from and where it went. Often that something is a person. But that’s another story.

In this story, the something is Chicago Fire Boat #41, which was docked at the Door County Maritime Museum in Sturgeon Bay for a number of years prior to the spring of 2019.

On July 4, 2018, Jim Ellis; his wife, Karen; and their daughter’s family from Minnesota took a sunset cruise to the Sherwood Point Lighthouse on the fire boat – a trip that included watching the fireworks set off in Sunset Park. Jim became intrigued with the boat’s history and how it came to be in Sturgeon Bay.

They immediately signed up for another cruise that fall, hoping it would go toward Lake Michigan so they could get a from-the-water view of their vacation condo at Snug Harbor on Memorial Drive, but the cruise was canceled at the last minute.

They made reservations to cruise again on July 4, 2019, but they learned in May that the boat had been sold. There was no closure, but it increased Jim’s hope that someone would dig into the history of Chicago Fire Boat #41, what it had done before it arrived in Sturgeon Bay, and what had happened to it after it disappeared.

This is its story.

Fire Boat #41, named for Chicago’s 39th mayor, Fred A. Busse, was built in Bay City, Michigan, and began service in Chicago on May 4, 1937. It was designed specifically to fit beneath the city’s bridges, and at 90 feet long, it was, at the time, the largest diesel-powered fire boat in the world. Its four onboard pumps could spray 10,000 gallons of water per minute up to 27 stories high.

During its 44 years of service stationed at Navy Pier, Fire Boat #41 responded to many emergencies, including the fire that destroyed the original McCormick Place on Lake Shore Drive on Jan. 16, 1967. The Fred A. Busse was decommissioned in 1981.

By the fall of 1986, it sat at Lake Calumet on the city’s far southeast side, stripped of everything of value. Next to it were two other retired fire boats, the Victor L. Schlaeger and the Joseph Medill, both built by the Christy Corporation in Sturgeon Bay and launched together on Nov. 5, 1949.

Eventually, #41 was rescued by John M. Selvick – owner of Calumet River Fleeting, a Great Lakes tug and barge company based in Chicago – who moved it to his native Door County. Restored and anchored at the Maritime Museum in Sturgeon Bay, it was a popular tour boat on the bay and Lake Michigan until Selvick’s death in 2012.

Selvick’s nephew, Ricky Nebel, had worked with his uncle on the tugs and tour boat since graduating from high school. He and his wife, Angel, bought the boat from Selvick’s estate and, by the spring of 2013, they were running Legends Cruises Chicago Fire Boat in Sturgeon Bay.

It was a family operation, with Captain Ricky at the helm. For the very popular July Fourth cruises, he was known for keeping the boat constantly turning 360 degrees so that every passenger had an equal view of the fireworks.

Angel dressed in a dalmatian costume to entertain the crowd – especially the children on board, allowing each of them a turn at aiming the water hoses.

“We especially planned our daytime trips to be kid friendly,” Ricky said, “because our three kids went to work with us every day. Cameron, Andrew and Angela, now 16, 8 and 4, loved being on the boat and meeting people, but as they got older, there were things they missed, too. Their friends’ families did things together on weekends and went on vacations in the summer. We went to work every day.”

After six years, the Nebels made the bittersweet decision to list Fire Boat #41 for sale.

“We loved that boat,” Ricky said. “It had a lot of sentimental value for us, and we wanted it to find a home where it would be appreciated.”

Meanwhile, back in Chicago, Ray Novak and Erich Totsch, Navy veterans of the Persian Gulf War, were working as captains of tour boats. In October 2018, Novak was looking online at boats for sale when he came across old #41.

“I called the broker and told him I could be in Sturgeon Bay the next day,” he said. “After spending two hours looking at the boat, I knew this would be a really exciting opportunity. My first thought was, ‘How can I get this boat to Chicago?’ My second thought was to tell Erich, ‘I have an adventure for you.’”

The friends agreed on the deal two days later at the Billy Goat Tavern, appropriately located on Navy Pier in Chicago. The sale was finalized in April 2019, and the boat made the two-day trip “back home” the first weekend in May. Financing for the purchase was arranged by retired Marine Corps Major Charles “Lynn” Lowder, who’s also an attorney; and restaurateur Dale Eisenburg, co-founders of the Veteran Business Project, an Illinois nonprofit that matches veterans who want to own businesses with business owners who want to sell.

Novak and Totsch spent more than a year “giving the boat a little makeup job by painting her and freshening her up.” Rooms inside the cabin where the crew used to stay now hold firefighting paraphernalia and pictures of #41 in action. The deck, with both covered and open seating and a bar, can carry 127 passengers. Totsch describes it as “one of the most unique boats on the river.”

Its maiden voyage in Chicago was on July 6, 2020. Because of COVID-19, the Chicago Harbor System shut down tours for more than three months, and when they resumed, maximum capacity was limited to 50. The owners are spending the winter redoing the bathrooms and working on interactive activities for kids in the interior of the boat, “where they can operate lights, bells and whistles.”

Some events, focused on getting together safely, are already booked for the season that will open in the spring at Fire Boat #41’s new dock on the Chicago Lakefront.