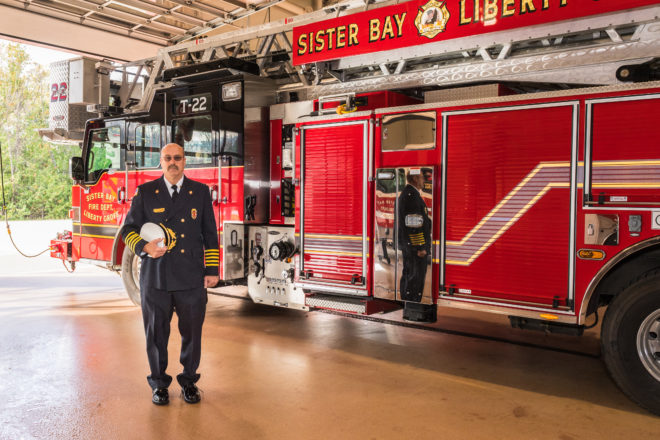 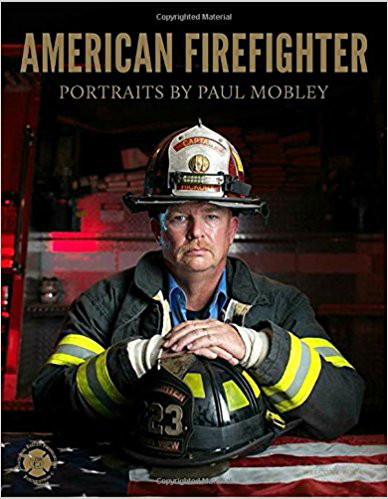 We were recently contacted by Janet Wilmoth, special projects director for Firehouse magazine, the leading trade publication for the firefighting industry, who wanted to let us know that Sister Bay/Liberty Grove Fire Chief Chris Hecht had been nominated and selected to be featured in American Firefighter, a book created to celebrate the 25th anniversary of the National Fallen Firefighters Foundation.

“In my role as editorial director for Fire Chief magazine (based in Chicago before it closed in 2013) and now special projects director for Firehouse, I frequently contact Chief Hecht as a resource on volunteer fire department and EMS issues,” she said. “In my 29 years of writing about the North American fire service, I consider Chief Hecht a progressive resource for fire/EMS trends and public education. As a condo owner in Baileys Harbor, I believe Door County has a real ‘gem’ in Chief Hecht.”

“It was an honor to be nominated but even more of an honor to be selected,” Hecht said. He is the only Wisconsin firefighter represented in the book.

“The book is educational and fundraising, and it’s an honor to be part of that,” he said.

Hecht said he learned that he had been nominated about a year ago. That was followed by interviews last winter, and finally a photo shoot that required Hecht to pack up and fly to Phoenix to meet up with photographer Paul Mobley.

“He came to everybody but me,” Hecht said. “When he was supposed to come here, we had a huge blizzard and he got stuck in Chicago for several days and threw his schedule off, so I wound up flying out to Arizona to get the photos done. The Phoenix Fire Department hosted that at one of their fire stations. That’s part of the whole big family fire department thing.”

“Chris was so nice to travel for his portrait,” Mobley said. “As expected, he was kind, heroic and grateful to be included. Such a brotherhood amongst all the subjects I photographed. All over the country, they all displayed the same humility, grace and complete commitment to helping others. I will always remember that.”

Hecht is proud to be a part of the project because the book really serves two purposes – education about the firefighting profession and fundraising for the National Fallen Firefighters Foundation.

Hecht is referring to the Sept. 26, 2004, death of Ephraim Assistant Fire Chief Bill Weborg, who was the son of then-Fire Chief Niles Weborg.

“They experienced that loss and they experienced the benefit and power of the National Fallen Firefighters Foundation for a family and for a fire department,” Hecht said. “The whole belief that it can’t happen here, that’s not true. It happens everywhere. Ideally, there would never be another firefighter death. Realistically, we know that’s not going to happen, so we look at things we can do ourselves.”

Hecht said he has tried to lead by example by losing weight and leading a healthier lifestyle.

“We try to promote that in the department,” he said. “We’ve partnered with Door County Medical Center to offer free health screenings for all the firefighters, EMTs, first responders in Door County to help people get a handle on their own health. Roughly 50 percent of line-of-duty deaths of firefighters in this country are due to health reasons, not because we get trapped in a burning building. It’s because we’re in poor health and don’t take care of ourselves. I try to lead by example on that locally.”

Hecht said he appreciates the community’s support for the volunteer fire department, and he hopes there is also support for those who have fallen.

“If people want to support the National Fallen Firefighters Foundation, go on Amazon and buy a book or just go online and make a donation,” he said. “It’s a great group that does a very necessary thing due to very unfortunate events.”

To learn more about American Firefighter and to order a copy, visit firehero.org.