Northern Door officials will hear a presentation about creating a fire district Feb. 21 at the Door Community Auditorium.

The idea of merging Northern Door departments has come up sporadically in recent years. Sister Bay/Liberty Grove Fire Chief Chris Hecht said this discussion shouldn’t be interpreted as a sign of an imminent merger. 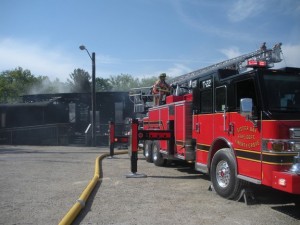 Northern Door fire departments will hear a report about the creation of a fire district Feb. 21. The departments currently have a mutual aid agreement in which manpower and equipment is shared. The Sister Bay/Liberty Grove department’s new ladder truck was used extensively when the Carlsville Roadhouse burned in 2011.

Though all departments from Jacksonport north have been invited to the discussion, Hecht said there is no merger plan yet in the works.

“There are no issues, there’s no incident that is spurring this, we just want to be pro-active about discussing this,” he said. “The more we can come together and communicate the better off we’re going to be.”

Jack Edwards, chief of the Lake Country fire and rescue department, will give two presentations about his experience leading the merger of the Delafield, Chenequa and Nashota fire departments to form the department in 2010.

The first presentation at 5 pm will be geared toward elected officials, while a 7 pm presentation will be framed for fire department personnel.

Edwards said a committee of nine people, three from each community, met for a year before deciding to more forward with the merger.

“Identity was an issue,” he said. “Many people were attached to their individual department, so there’s a learning curve to get people to realize we’re all one now.”

Edwards said the three communities that formed his department were just “looking for a way to do things a little bit better. There was redundancy of apparatus and some duplication of efforts.”

After the merger the department was able to sell two fire trucks that would have cost half a million dollars each to replace. In the long run, he said, most of the savings from merging departments will come in equipment, but there is also consolidation of software purchases and training.

“It only takes a couple of engines before you start seeing some big money saved,” he said.

The Lake Country department now has 70 members, though not all of them respond to every call. Personnel are still dispatched based on the location of the incident.

“It’s better to have this discussion now, before there’s some incident or budget crisis to respond to,” Edwards said. “I’m happy to answer questions for other departments because I wish we would have had more people to talk to when we did this.”

Some Northern Door fire departments have struggled to maintain a volunteer force, though a mutual aid agreement has helped to fill personnel gaps.

Hecht, who is also serving as the Town of Gibraltar’s interim fire chief, said there are at least 25 merged departments in Wisconsin, and there’s no need for Northern Door to start from scratch in their discussions of a merger.

“This has happened enough now that there are few questions that haven’t been asked already by departments in other places,” he said.

Both meetings are open to the public.